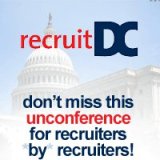 If you are aware of any other upcoming recruiter networking events, please let me know, please send a message to Ben Gotkin here on RecruitingBlogs.com.

The next recruitDC event is coming up!

Provide temporary and contract staff to your clients. You recruit, we handle the rest.

You need to be a member of recruitDC to add comments!

The day will include keynote presentations as well as concurrent sessions on key topics challenging the recruiting community.

So you launched a Corporate Career Facebook Page, now what? Kerry Noone, Senior Marketing Manager, Sodexo

You have a great idea, now all you need are the resources, buy-in and team to implement it. No problem! Brigit Freedman, Director of Employment, L-3 Global Security and Engineering Solutions

Get your ticket now as recruitDC events always sell out quickly!

April 28th is the next event, see additional buzz at:

Comment by Ed Bales on December 3, 2009 at 3:25pm
I will be in the Herndon/DC area 12/14 - 12/15 (maybe longer). So, if you have need for a Senior Recruiting Professional contact me to arrange interview. I'm totally open to domestic and international travel as well as OCONUS locations to include emerging and frontier countries.

Comment by Yardley on September 23, 2009 at 1:55pm
Looking for a top notch sourcer - contract recruiter at sourcefire. please email ygreene@sourcefire.com

Comment by Kelly Dingee on September 9, 2009 at 6:01am
Anyone looking for a contract sourcing/recruiting opening in Columbia, MD? SourceFire has one - email Chris Kelley for details ckelley@sourcefire.com

Comment by John Sunder Paka on June 11, 2009 at 3:42am
Good Morning, I have found WizTalent Recruiting Software is the best of all that I have researched and worked with. Its fast, simple and integrated with Monster.com, Dice.com, CB and LinkedIn into single interface..

If interested e-mail jperreault@sesc.com or call Jay at 703-262-5663 or apply at http://itcontract.ning.com/group/DCTech

Name of Award/certification
ICIC released Horizon Staffing Services is ranked 17th on the list of the fastest growing inner-city companies in America its 2009 Inner City 100 list.

Reason for award
Horizon Staffing Services is ranked 17th on the list of the fastest growing inner-city companies in America when the Initiative for a Competitive Inner City (ICIC) released its 2009 Inner City 100 list. Innovative practices and sustained growth are the predominant traits of the 2009 Inner City 100, a ranking of the 100 fastest-growing businesses in inner city communities nationwide.
The 2009 Inner City 100 winners grew at a compound annual growth rate of 40 percent and an average rate of 324 percent between 2003 and 2007. Collectively, the top 100 inner city businesses have employed nearly 17,000 people and created nearly 10,000 new jobs over the past five years

Comment by Jay Perreault {DCTechRecruiter} on May 15, 2009 at 2:07pm
Database MIGRATION from SYBASE to ORACLE- Reston, VA
1) 5+ years of experience with Sybase 11.2 & Oracle 10G as a Database Administrator
2) This is a Java based solution not HTML
3) Systems rewriting experience as well as install, config, troubleshoot etc.
4) Extensive builds and maintenance experience is needed
5) Unix platform and DW experience preferred
6) Experience with DBII, Progress and/ or PL/SQL
7) Shell experience is a plus
8) Requires BS/BA degree
9) EAD, Green Card & US Citizen only please

Comment by Jay Perreault {DCTechRecruiter} on May 11, 2009 at 1:47pm
.Net Developer- Chantilly, VA
1) 5+ years of C# experience in an Agile development environment
2) Clearable (Secret preferred)
3) The work will be performed on the middle tier application in ASP
4) Hands on experience using PL/SQL is ideal
5) Requires BS/BA degree
6) US Citizen only please
If interested e-mail jperreault@sesc.com or call Jay at 703-262-5663 or apply at http://itcontract.ning.com/group/DCTech

Hope All is well!

I am an Senior Technical Recruiter with Geonine Inc a Software IT consulting firm. Let me know if i can assist you for your client requirements.