Why Clients Should Love Recruiters

It was 1892 in Western Oklahoma, my Great Grandfather had settled on a piece of land, not far from the Old Chisholm Trail. He made this his home, in the side of a hill for a while. As he stood out at the edge of the prairie grass, looking out over the wildflowers, locals call Indian Paintbrush, he knew he had traveled far. But more importantly, he had a vision, and he had a passion for what he wanted for his family, himself, and all of those around him.

I was born in Oklahoma, and…

This was a high school graduation speech. Couldn't have said it better and it applies to not just high schoolers... I am sure most people here can identify with this.

Time to Bundle Up Your Recruiting- Improving the Candidate Experience

Having cold feet can make our entire body feel chilly. In order to alleviate this, we put on socks or boots to warm up. Our feet are the base, the foundation to our body, our entire motion of walking is based on them. If we have an injury, we limp along, not meeting our full potential. This can be compared to how you structure your candidate experience and can affect the rest of your interactions with them.

How this applies to your workflow.
It’s important that…

Linkedin's key missing link (and what I did about it).....

I got into the recruiting world 3 years ago and, like a lot of us, started using Linkedin very heavily to find prospective candidates and work my network for referrals. Recruiting like any sales process is inefficient but the one thing that struck me was the heavy reliance on guesswork on which candidates I would reach out for specific positions. Linkedin has many great features but a key thing it lacks is giving you an understanding of candidate intent when it comes to job search. In fact…

What is a niche Facebook Career Page, and how can it help your Facebook Recruiting Strategy? Well, to start, it is a Career Page devoted to a specific job field within your company, such as sales positions or…

Can a "One-Man Show" Offer Both Direct and Contract Services?

When adding contract staffing services to your existing direct-hire recruiting business, you must first decide if you are going to handle the back-office tasks (payroll, benefits administration, employment paperwork, invoicing, etc.) in-house or if you are going to outsource them.

Many small firms or "one-man shows" choose the latter. After all, it can take the average recruiter one to six months to get set up to handle contract staffing issues in-house.  Not only…

I regularly run free recruitment software and technology webinars and yesterdays, on Advanced Sourcing, proved more popular than most. This is a recording followed by my notes on what happened.

I wanted to convey the shear scale of the subject of recruitment sourcing while also focus on some useful techniques that can give immediate benefit. It’s really mind blowing…

Wednesday was my one year anniversary as a Corporate Recruiter for Zones. Oddly enough, it was also the day I filled my 120th position. That’s a lot of interviews. Of course this includes internal transfers and promotions I helped facilitate, some easier than others (that’s still a lot of interviews). Here’s some of what I’ve learned –

Recruiting is (still) a sales job. Just because I’m not working on commission anymore doesn’t mean I don’t… 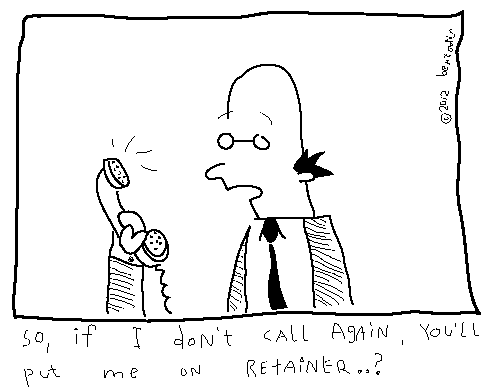 According to AppData and Facebook’s advertising tool, 97% of Pinterest’s Facebook fans are women. Moreover, a 2012 infographic by Tamba shows that Pinterest users are predominantly women ages 18 and…

I was recently reflecting on our “high fees” as commented by a client in a one-on-one interview.  I pulled out the 2011 research report put out by the Talent Board entitled the Candidate Experience.  In addressing the channel by which Candidate learn about job postings and companies it was clear that the following three avenues are most consistently used by companies to communicate with job seekers:

1. The Career Site is the most consistently used channel for publishing information…

When do you just walk away?

If you've been in the business long enough, then you've experienced situations that made you upset, angry, irritated.  People are irritating, sometimes situations are upsetting and at other times, things happen.  As recruiters, we might work contingent or on contract or for an industry player but either way, there are times when we've considered walking away either from an unreasonable client or from the field of recruiting all together.  "ENOUGH!" we said.…

Here is our weekly feature in which we share the top articles we enjoyed from the past week about recruitment marketing, social recruiting and anything else in the recruiting space. In this article, we’ll be talking about candidate experience benefits, job boards, closing the loop, recruiting on Pinterest, best TrenchHR blog posts and mobile…

The True Meaning of Passion

From Good To Great - How Great Outcomes Are Born

I stood triumphantly looking down the hill my daughter and I had just hiked on a beautiful, albeit overcast afternoon on a Saturday in February.  We had arrived at a beautiful view that looks out across the vast silicon valley. There are many times when individuals doubt our capacity as human beings to achieve breakthroughs.  I have had in my career many who thought they might know better.  Or perhaps would see their own selfish take on how life's outcomes should come to pass.  Inwardly,…

Blogs, Wikipedia, and the dangers of moving digital

I've heard recently that Britanica is going out of print.  For those of you who don't know, Britanica used to publish many versions of books called Encyclopedias. Back when I was growing up in the 70s and 80s, these books were an excellent source of world information.  In today's ultra fast moving information age, these books simply cannot keep up with the changing info that's more easily accessible online and not only that but we all know that people simply aren't reading books…

Help Unemployed Candidates Get Back in the Game

The unemployment rate may be slowly going down, but there is one number that seems to keep going up: the number of Americans who have been out of work for six months or longer.

I need to fill a job, what should I do? A look at the near future

Corporate recruiters are posed this question every day.  However, in today's recruiting environment the answer is becoming more and more complex.  Not only are recruiters being continuously bombarded with new positions that need to be filled quickly with top quality talent but they are presented with a slew of options to use in order to recruit and source this talent that makes it even more confusing.  (Not to mention trying to track all these sources with…

Recruiting - less is more or Some Simple Mistakes to Avoid when Trying to Fill a Tough Rec.

Here's a thought.  Less is sometimes more.  Everyone nods their heads sagely.  Of course, sometimes less is more.  It is a cliché almost to say 'less is more'.  Well if it is so blindingly obvious why do so many companies think that 'more is more' when it comes to recruiting?

What do I mean? Well . . .when companies engage an external recruiter to help them with those tough-to-fill bits of headcount that their internal recruiter can't manage why do they think that engaging with…