Just called into WaMu's customer service line; the first thing I heard was, "We are excited to announce we've become part of JP Morgan Chase!" Talk about laying it on thick. How about the WaMu recruiters in the audience - are you excited?

Ho, Ho, Ho and a severance package. But at least the excess inventory will be discounted, right? But will anyone be buying?

Learn a Boolean, Start a Business

In the 10+ years that I've been part of the online recruiting community, I've never seen a time when it was possible to learn a rudimentary skill and then pawn oneself off as an expert. Shally and G-Man have been internet search wonks for this period and have the experience to bolster their skills teaching with a range of specific examples;… Continue

A bailout that has no chance of working

On news that Wachovia will be changing its logos soon, I proactively called some of my CitiRecruitingFriends to introduce them to my WachoviaRecruitingFriendsWhoAreNowNervousAboutTheirJobs. You know who you are so let's talk today, k?

It's frankly pathetic that the bailout plan has become another political football. Maureen shared a letter from one of her state reps that was replete with political doublespeak and inconsequential emotional junk yet failed to address the reasons how… Continue

Way off topic but hey, it's Friday

As a UVM grad and an attendee when Ben and Jerry's started up their enterprise in an old gas station bordering the square in downtown Burlington, VT, when I read this today, many words passed my lips...

In response to our letter, Ben and Jerry's issued the following statement: "We applaud PETA's novel approach to bringing attention to an issue, but we believe a mother's milk is best used for her child."

A thread over on ERE's Recruiting Leadership Forum asks the throngs Monday's question of the day, "How do you keep recruiting costs down?"

Naturally this begs a question: How many in recruiting really know and track the direct and indirect costs of talent acquisition?

How can you decrease what you don't know or track?

Screw Recruiting...Work for the Railroad

"Virtually every career employee — as many as 97 percent in one recent year — applies for and gets disability payments soon after retirement...The L.I.R.R.’s disability rate suggests it is one of the nation’s most dangerous places to work. Yet in four of the last five years, the railroad has won national awards for improving worker safety."

During contract negotiations in 1994, management also tried to take… Continue

A word of advice to the "vultures"

I don't mean "vultures" in the pejorative sense of the word but a bit of sense and sensibility to recruiters circling high above the din of Wall Street's failure...consider the character of the people who engineered this fiasco before recruiting them to your angelic little firm.

Not everyone can wildly thrive in a turnaround environment - or your environment.

Only the best recruiters need apply

Poor Financial Services now has Henry Paulsen and his version of the RTC to blame - no thank - for the handou...uh, bailout. From his Treasury Department bio, "...[before] coming to Treasury, Paulson was Chairman and Chief Executive Officer of Goldman Sachs since the firm's initial public offering in 1999. He… Continue

Don't be a vulture

Over one ERE's NYC Group, there's a juicy little thread debating what kind of bird calls into Lehman these days...

"The tidal wave of bad finance news is freezing credit availability and battering investment portfolios, but a more human toll is almost certain to follow."

Over on CFO.com comes an eye opener for the masses: With the carnage resulting from Wall Street's inability to lead and govern itself comes the reality of the worst case of musical chairs seen since the Great Depression...and their won't be that many chairs in the game.

Certainly many will find jobs; I certainly… Continue

He's Baaack...Invite him to RBC and give him a real welcome

From ASK Maureen over on ERE...

MESSAGE:
Good day, just wanted to let folks in this group know Im back. I have been absent from the board for a year while engaged in my new role.

I am currently leading recruiting for the East Coast, Federal and Canada at HDS in the sales and consulting groups.

A Cover Letter That Didn't Suck

I ghost wrote this blog post for one of my clients about 10 months ago to highlight how cover letters don't have to suck the lifeblood out of its readers. Readership spiked to 18,000 over the typical, uh, 30-40 hits; comments were aplenty.

For those who hate clicking, here's the cover letter that sent me over the edge...

"I’ve been bouncing boxes for Uncle Sam 2.5 years now in some of the most… Continue

"Last year, Mr. Fuld earned about $45 million, according to the calculations of Equilar, an executive pay research company. That amounts to roughly $17,000 an hour to obliterate a firm. If you’re willing to drive a company into the ground for less, apply by calling Lehman Brothers at (212) 526-7000."

In other words, better recruiters will speak less yet say more. Or to put it colloquially, give someone enough rope and… Continue

Nothing outrageous or titillating but worth a few minutes of your time. I especially liked the recent The Headhunter Always Rings Twice piece by Marcy Lerner of Vault.com.

I'm biased - with family members offering recruiters a range of disabilities, I used to cringe when I was asked to help them find new jobs. Recently the ADA Amendments Act of 2008 addressed many of the original law's shortcomings as well as Supreme Court rulings that whittled away the intent of the law.

The law will make it easier for workers to prove discrimination; it explicitly relaxes several stringent… Continue 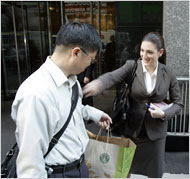 Lehman is already battling to avoid “job abandonment,” in which workers simply stop showing up even though they have not been formally laid off.

Some of that was clearly happening on Monday as some of Lehman’s trading floors were only about two-thirds full. A rush of résumé-writing signaled the melancholy of an institution in its final days.

Many employees toyed with their résumés in full view of colleagues. Others perused job-listing Web sites — Wharton’s… Continue

Law 3 - Conceal your Intentions (the Zen of Recruiting)

"Keep people off-balance and in the dark by never revealing the purpose behind your actions. If they have no clue what you are up to, they cannot prepare a defense. Guide them far enough down the wrong path, envelope them in enough smoke, and by the time they realize your intentions, it will be too late."

Ah, the Zen of Recruiting or better known as recruiting without recruiting. Or if you prefer, conceal your intentions...

Which is "worse" - concealing your… Continue

Can you picture the what the financial services recruiting landscape is going to look like one month from now? Read comments from today's NY Times article on 2 Wall St. Banks Falter; Markets Shaken.