“Jealousy is the tribute mediocrity pays to excellence.”

Sadly, many people are jealous of (some even hate) anyone who wants to be or achieve more and they will do almost anything to bring everyone down to their level.

Because of their own mediocrity and failure these people discourage success.

This is why it’s absolutely… Continue

What Got You Here Won't Get You There: CHAPTER 3

This chapter titled The Success Delusion, or Why We Resist Change concludes Section One of this book.

One thing that really struck me from this chapter was the powerful statement the author makes about how all of us in the workplace delude ourselves about our achievements, our status, and our contributions.

* We overestimate our contribution to a project

A video from the good people at Upstream Group.

A few of the great moments in Sales history…

“Sales Is What It’s All About!”

What Got You Here Won't Get You There: CHAPTER 2

Growing up through High School I always loved CliffsNotes. When I got to college I remember that SparkNotes was also pretty big. While I’ve never been exactly sure who “Cliff” is and why he felt he needed to create “Notes” for his classmates and students everywhere, but I thank him wholeheartedly for his efforts.

Me, Myself, And I

Blogs are great for airing dirty laundry especially if it’s the kind that has a familair odor to others. This particular situation is one I’m sure you can relate to.

It was the perfect book end to a crazy week. I’m always amazed by the number of working professionals who can’t grasp the idea that we’re here to help them. When I write “help” I don’t mean “serve your beckon call” even there are times when I wonder if someone has secretly put a “kick me” sign on me… Continue

Remember to use your brain and think for yourself! Sales (and Recruiting) is about reading and reacting to each unique customer and their specific needs and not about trying to sell them a one-size-fits-all solution. 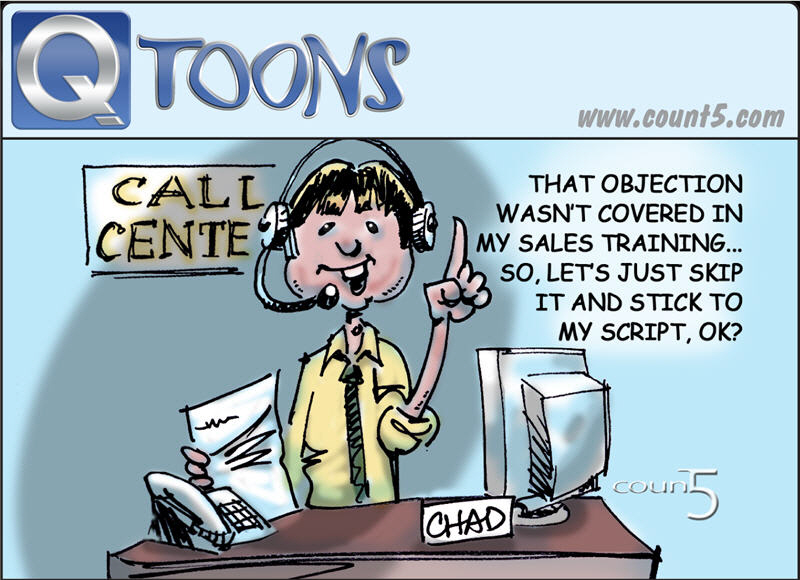 First and foremost, let me just say that it’s good to finally get back to work after being home sick since last week Tuesday.

The flu bug definitely bit me hard and although it was a battle of epic proportions (the sickest I’ve been in a LONG time; I was so sick I missed Easter!) I’m proud to say that I claimed victory.

Looking out my window this morning here in East Aurora, NY (and wondering when Spring will officially arrive!) a particular quote comes to mind:

Seemed apprpriate for not only the current weather and climate, but also for those of us in Sales and Recruiting.

In Sales (as in Recruiting) we must ALWAYS be ready to adapt to each unique individual and situation we’re working with.

Look for opportunities to be flexible on the fly!

There is often a silver lining to everything. You just need to look for it yourself.

The big news from last week was the negative report that employers slashed jobs nationwide to the tune of some 63,000 in February. In fact, this news was easily the lead story for much of the day Friday.

Well, here’s some news that’s equally important (and very relevant), but I’d be willing to guess that many people won’t see it unless they’re looking for it and you especially won’t find… Continue

The big news of the day is the Labor Department’s report that employers slashed 63,000 jobs in February or, the most in 5 years.

This news coupled with the current housing crisis has many people fearing recession. What is up for debate is whether or not we are headed in that direction or already in one.

Regardless, we shouldn’t let the drive-by media machine dictate how we feel and/or think about the current state… Continue

Score A Goal, Hit A Homerun!

We’re always watching to see how candidates attempt to separate themselves from their competition in the marketplace.

In fact, we’ve documented a few of these attempts and promoted them as good advice for those of you conducting a job search.

Over the course of the past two days, I noticed something that I’ve never encountered before from a candidate and I thought it was worth mentioning.

Dare I call it a… Continue

Be careful what you promise your customers because you always want to make sure you can deliver and follow-through!

A door-to-door Vacuum Cleaner Salesman manages to bull his way into a woman’s home in a rural area.

“This machine is the best ever!” he exclaims, while pouring a bag of dirt over the lounge floor.

The woman says she’s really worried it may not all come off, so the Salesman says, “If this machine doesn’t remove all the dust completely, I’ll lick it… Continue

Today’s post is for Recruiters and Hiring Managers who are tasked with adding Sales Professionals to an organization.

An excellent piece titled “Secrets Buried in a Salesperson’s Resume” on ERE today by Lee Salz talks about the importance of accurately assessing the Resume of a Sales Rep who is better than the average person at selling themself to others.…

I came across two job-related news items over the weekend that can only be classified as BIZARRE to say the least.

At first, I thought I was reading some satire the likes of which are usually seen on popular sites like The Onion, but to my surprise these were legitimate news stories.

If you’re a Recruiter, a good piece was published the other day on CNN’s website regarding the worst states for job hunting that you should spend some time with.

One frequently overlooked, but critical factor in finding a new job is a state’s Unemployment Rate - - hardly a news flash to us in the Recruiting industry.

The Unemployment Rate is the percentage of job seekers in the work force who are still looking for work. The higher the percentage, the more difficult it is… Continue

This is a good one from Work Joke! May we all consider this as it has both professional and eternal significance.


When a young salesman met his untimely end, he was informed that he had a choice about where he would spend his eternity: Heaven or Hell. He was allowed to visit both places, and then make his decision afterwards.

“I’ll see Heaven first,” said the salesman, and an angel led through the gates on a private… Continue

How To Bond Without A Camp Fire

There’s an excellent article today by Ken Forrester over at ERE titled Bond With Your Candidates that boldy asserts that “before the Internet, Recruiters successfully filled jobs without a Resume or Job Description.”

All kidding aside, he’s absolutely right and this reminder - slash - piece of advice can also be extended to not only our… Continue

You know what they say, be careful about pointing a finger at others because you’ll have 4 more pointing back at yourself.

Sadly, there are far too many so-called professionals who fail to take responsibility in even the most trivial circumstances.

“Accountable” can be defined as being “answerable” or “responsible” for one’s actions. Unfortunately, organizational accountability today is lacking.

Specifically, I want to focus on personal accountability of the… Continue

The Art of Negotiating in Sales...