I have to write about this every year so lets start 2012 by resolving to write better job descriptions.

It starts with your JOB TITLE.

The title is the first thing a job seeker sees when searching online so its important to give it context. It must inform the job seeker, not confuse them. And its a chance to add keywords which will help make it…

Job boards have gotten a bad rap over the past few years. A lot of it has to do with the reputation of the big boards like Monster and social media fairies exclaiming the end is near. The naysayers could not be farther from the truth.

Now, I have all the proof I need to know that job boards are…

Hey you, Occupy this job!

I love creative advertising strategies so when this came across my desk I just had to share. If your company's location has traffic going by you SHOULD be taking advantage of it for hiring.

CNC Industries of Indiana is…

Entitled "Life at Google" their twitter account is a living, breathing, active communication tool for their recruitment strategy. They link to job openings but they also COMMUNICATE WITH CANDIDATES! Something many…

IF I RAN RECRUITING

I've often wondered what I'd be doing if I didnt run AllCountyJobs.com any longer. I could probably do a variety of different things and one that comes to mind is a corporate recruiting department. I would bring a fresh perspective and shake things up.

Here's what I would do if I ran recruiting...

I received a call last week from my recruiter friend Maureen Mackey. She wanted to rant about the bad job seekers out there she is seeing too many of these days. I'll bet more than a few of you also have complaints so listen to hers and add a comment about what job seekers are doing wong.

How to spot a good job board

There are thousands of job boards to choose from if you need to post a job. But not all are created equal. Here are some telltale signs that the job board you are about to post on is worth using.

1. It Looks Good: If the job board has good design, meaning a nice logo and well done interface with clearly spelled out call to actions and navigation.

2. Contact Info: If the job board puts their phone and email in a prominent place…

Should recruiters start their own job board?

Lately my job board consulting business is getting calls from a particular audience: third party recruiters. Usually it's a one or two person team that has been recruiting for many years who now want to broaden their offerings through a job board to serve whatever niche they work in. They also want to make more money which a job board can be good for in terms of a supplemental…

Here are some job leads from companies who recently announced expansion plans. They are a good source of leads for recruiters. Get more with the Hidden Jobs app for Android or Apple devices.

“If you podcast they will come”


That is what I believed would happen when I launched this jobcast service 4 years ago in the online recruiting world. And that is what happened. Listeners came in droves and our clients reaped the benefits of humanizing their companies. One podcast (aka jobcast) at a time.

Today I am proud to… Continue

The Next Generation Job Listing

When it comes to introducing new products in the online recruiting space, innovation is an over used word. I’ve seen too many press releases that claim to be the “be all, end all” tool that you need. It’s now just a word with hollow meaning.

So I won’t be using it to describe JobSpeek, my new mobile…

A job board owners view of LinkedIn

There’s a post on Forbes entitled ‘Linkedin is about to put job boards out of business‘. Although I know the author Dan Schwabel and like him, he is off-base with his assumptions.

LinkedIn just announced a new feature that allows job seekers to ‘apply with linkedin’. Its a button that companies can put on their career pages and let job seekers submit…

Last week I attend the Career Planning on a Napkin conference where I recorded some of the career coaches speaking.
Jennifer Scott - Owner of HireEffect, LLC - “Beyond the Profile - The Job Search / Corporate Marketing Connection”. Find her on twitter @hireeffect

Do you really want to post that job on Craigslist?

I talked to a job seeker the other day and asked her how her job search was going. She replied 'its tough out there' but who can blame her. The competition is stiff and job hunting aint what it used to be.

We started discussing my local job boards (which she uses) and someone in the group mentioned looking for jobs on Craigslist. "Ugh" she said, "there's a lot of crap on craigslist".

CL seems to be attracting anything and…

A friend of mine who runs a small staffing firm in Connecticut asked me if I could recommend a software package that is not too expensive and can handle their candidate and client data.

It needs to store lots of notes on people, have good skill set sorting, etc.

Any suggestions? What does your firm use?

I'm looking for any recruiters who own an iPhone, iPod Touch or the iPad2 to become part of a beta test for a new mobile recruiting app. Please contact me for details via RecruitingBlogs or shoot me an email 'chris at allcountyjobs dot com'. 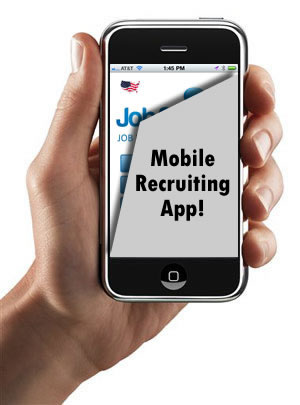 For the past few months one banner ad has caught my attention as I visit my favorite websites. It's a banner ad for Harry Joiner the eCommerce headhunter. I see it a lot on sites like BusinessInsider, TechCrunch and HuffPost.

And I love it. He is personalizing his business by adding his picture and the giant phone number is a clear call to action. The banner links to his current…

I created an app recently that tracks new job announcements of companies that are hiring and expanding. It's an app that links to a database of articles by state. Smart job seekers use it to stay on top of their job market. But it occurred to me recently that the app (called "Hidden Jobs App") is also a great way for recruiters across the country to find leads. The app is currently available for…

I build sites in order to sell them.


Today I am putting up ALL 32 niche sites I have started in recent years as one giant niche job board network. Combined these sites have over 20,000 uniques per month generating more than 50,000 monthly page views (and growing). They generate approximately $1,000 per month between postings, backfill revenue and Adsense. All are hosted on Jobamatic. Two of the…

I think apps are the new websites. As mobile devices become more prevalent it will be important to offer these users of smartphones and tablets a good user experience. The best way to do that is through an app. An app gives your users easy access to your site/content.....On Monday I launched my first app for sale in the itunes app store.

Its called the ‘hidden jobs app’ and it tracks hidden job announcements across the U.S. in a simple…