I'm planning to be at RecruitFest in Boston on the day before it opens (I'm taking Amtrak up from NJ). So, Wednesday night (perhaps at a wine bar) and, again Thursday during the day I'll be looking for a lively discussion on the pros and cons of the Candidate Experience. I might bring a poster like the one above. Then again, maybe not.

Why should we care about this phenomenon anyway? No one ever cared about candidates during the 'Olden' days' when the hiring process ran at the speed of the US Mail (Oh, and is the process that much faster now that we operate in 'real' time?). Or, did they?

If the candidate experience were relevant wouldn't there be a 'standard' definition for what it looks like? There isn't.

Wouldn't employers be increasing their investment in a better experience so they could see a marked difference in who showed up at the door, how candidates make their choices and how long they stayed while performing at ever higher levels rather than asking recruiters to increase their req load? They don't.

Wouldn't third party recruiters actually sell their ability to add value to the candidate's experience as a differentiator rather than selling the rather common and outmoded skill of simply finding a breathing candidate? They don't.

Wouldn't hiring managers set a priority on making sure each and every candidate is treated in a way to guarantee their interest now, later and even later than that?

Wouldn't recruiting leaders measure deeply the experience of the candidates and the correlate that to the performance bonus of the recruiter so that they are measured on what is really important? Nah.

And, of course, there are the candidates themselves. Should they care enough about what they've gone through during the various 'touch points' they've had with the employer (whether actively search or dug out through sourcing) that they consider it an indicator of what is to come and opt out in increasing numbers. I'm kidding of course, most (active) candidates either want the job and the harder it is to get the more they appreciate their success or, their idea of an improved experience(passive) is wrapped up in 'what's in it for me'.

Do you think the fellow below will opt out or will he... 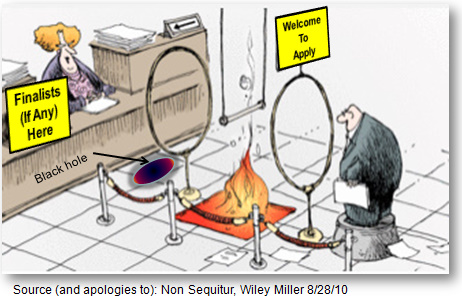 ...jump, and if he does jump through the hoops, does his candidate's experience really matter?

Comment by Pete Radloff on September 9, 2010 at 1:50pm
It's all about candidate experience. In the day and age when candidates can tell hundreds of people about your process in mere seconds, IT MATTERS. 20 years ago, when no one could be the "beat reporter" for candidate advocacy, it did not matter. Throw the candidate out with the bathwater, and fine 20 more. Now if you do that, other job seekers, potentially those who are the TRUE A-players you want to recruit, are already not taking your calls because of the posts or calls to FB, Twitter, Glass Door, etc.

Candidate experience in your megaphone to the rest of the community that says "hey, we have a good process here, and everyone matters when they walk through that door."

Comment by Chris Brablc on September 9, 2010 at 2:58pm
I agree with Pete. It's becoming more and more important to make sure candidate experience is great. Not only can candidates ruin your employer brand by talking bad about your company via social media and word of mouth but you also make it much harder to reach top candidates that have options. If you put too many hoops in your process, you are not going to end up with top candidates as they won't be willing to jump through those hoops.

A great candidate experience has more impact on the quality of the candidates you get rather than quantity in my opinion. And that matters.

Comment by Pete Radloff on September 9, 2010 at 3:03pm
I'm thoroughly embarrassed here. So I read this with about 4 other things going on, and in my mind, I'm thinking, "I just had a conversation with Gerry Crispin about this at RecruitDC" He'd be the PERFECT plug for this". Then seeing that Gerry wrote this, well, you can guess how happy I will be for the arrival of Friday.

Comment by Gerry Crispin on September 9, 2010 at 3:40pm
Thanks Pete. I can see you and Chris can see the possibilities but, its not about whether they CAN...its about about what they DO.

When was the last time someone you knew who was seeking a job said, "You know those firms just don't get it. they ask too many personal questions. I'm not going to apply even though it is the perfect job in the perfect spot at the perfect salary"

I want to talk to the person who won't jump through hoops if the opportunity even appears to be what they want.

And, I'm not speaking to an experience in which a candidate is trashed by an idiot hiring manager or recruiter. No one stands for that. I'm just sayin If the questions are a pain, if the obstacles are many, if the acknowledgments, feedback and ability to get status are few and far between, Is that not a challenge to the A player to overcome after her lesser competition has whined themselves out of the lineup?

Comment by Gerry Crispin on September 9, 2010 at 3:42pm
Oh, and should I be using a picture in which my tongue is more firmly seen as being stuck in my cheek?

Comment by Gerry Crispin on September 9, 2010 at 3:43pm
Where's @Jerryalbright when I need him.

You know my position on this. I'm happy to add it to your discussion here.

My position: there is no such thing. Obviously there are individual candidate experiences. I mean - of course they are living, breathing people and are aware of the process of interviewing - but there is no larger "Candidate Experience" to speak of. It's just another buzzword for the speaking circuit far as I can tell.

Sorry Pete - you're dreaming. Gerry somehow knew read my mind and nailed my response before I even read the post. (He's good!) Thinking that all these applicants are remotely interested in some social discussion about their specific experiences with any company in particular is laughable. Heck - you can barely get a candidate to tell you about their qualified friend who is LOOKING for a job in many instances. To think they all pick up the torch and any sort of momentum is built is in my opinion way off the mark.

You know what I think if (which has never happened) some guy I know tells me about his bad interview experience? I think "well - you must suck then - or they would have hired you."

Should we all be aware of the "human" side to all this? You bet. Is there a larger discussion? Possibly - but I think it's been had. Treat people as you'd like to be treated. Do the best you can to offer feedback. Don't string people along. Hire the good ones.

The rest is hogwash.

Want to know the experience I'm concerned most with? My client's. Now THERE is a good place to spend some time. For the most part on any given day there are millions of faceless resumes being emailed to HR folks and line managers alike. They all look the same. It's a daily barrage of 1 and 2 page Arial (or Times New Roman) type in the same structure and format as the last and the next. Nice little email message saying how perfect the candidate is in about 3 sentences......Word doc attached.

Know what experience a candidate wants? To be hired. The rest is over-hyped.

Know what employer brand they want to see? Your company logo on a paycheck made out to them.

Comment by Chris Brablc on September 9, 2010 at 5:25pm
Jerry and Gerry, definitely valid points and I agree motivations of candidates are probably more centered around incentives (getting hired, getting paid) than anything else (especially connecting with the company). And even when they "connect" with the company, they are doing so to get hired.

But when I hear candidate experience, I think of it more from a functional standpoint. I think of the process of a candidate hearing about a job position (through job ad, referral, etc.) through to when he finishes the interview process (not necessarily the social conversation side of things).

Sure you can put tons of obstacles in the way of candidates to apply or not fix a faulty application (one where you are losing significant portions of candidates), but understand why you are doing it (To get less candidates applying? To test skills?) and who's sticking through it (A-Players? Candidates desperate for a job?). I just don't see the point of making it harder than it needs to be without valid strategic reasons.

Lastly, totally agree with you that there need to be better solutions in place after candidates submit their resumes in terms of search and filtering. Dealing with the massive inflow of resumes is the hardest task recruiters have to deal with. And we definitely need to treat others like we want to be treated.

Comment by Gerry Crispin on September 9, 2010 at 9:52pm
Jerry. Perfect timing. You are the best. Candidate experience has become a cliche w/o defining it as you just did. The conversation should build from a fondation of what really matters. Everything else, as you say is 'hogwash'. I aspire to 'channel' your 'emperor-has-no-clothes pov this Fall but still- nothing like the 'original'.
Best

Comment by Gerry Crispin on September 9, 2010 at 9:57pm
Chris. I enjoy the basic point we all share to improve the efficiency of a process- especially the broken pieces that make life miserable for so many. The problem is that so many recruiters are driven by their technology rather than the master of it. Almost none have ever applied to their own jobs...ever...let alone at least once a month to test the 'path' in. I'm a fan of mystery shopping your openings to get at the broken pieces and unintended consequences. About 3% do it.