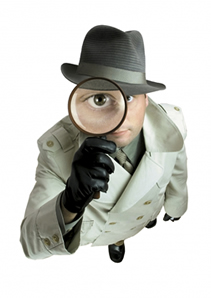 It was rather a fluke that I found out that private investigators make great sourcers. I had been working for a large multinational who's CEO had asked me to check on a couple of recent employees who had flown the coup to join some optical networking start-ups.

The thought was that they had taken intellectual property with them and the CEO wanted to see if I could find some information that would lead us to a fuller investigation. I hired a private investigator that was recommended by some friends and a week or so later, the PI comes back with a whack of data, not only on intellectual property theft but also a list with all the contact numbers of all the employee in the start-up, including full salary information, including bonuses, stock options and performance appraisals . Wow!

Let's just say that I continued to use the PI for many more sourcing projects as well as a few other legal matters for my clients. The cost of using an investigator vs. a sourcer are in some cases lower and the results very acceptable.

Let's face it many people say they are great sourcers/lead generators but they are for the most part recruiters. Sourcers need to get down and dirty, pick up the phone and work it for bits of information they piece together into a larger canvas. PI's are trained this way, they know human psychology and have the ability to maneover it to their advantage.

If your not getting the results you need out of sourcing, try hiring a private investigator for a short period of time to see how they perform. You might get a whole new perspective on what it takes to source candidates.

For more blogs by Francois Guay go to: https://attackdefenddisrupt.wordpress.com/

Comment by Tami Brittain on September 21, 2011 at 10:56am
Francois - I couldn't agree with you more! Having moved from research/PI work to recruiting (trust me, it's much more rewarding finding someone a job than finding someone in a compromising position) back in 2005, I can honestly say that when I *do* bring my work home, I don't cringe at the thought.

Sourcing is having access to directories and information on the best candidates avaiable. Believe me if I have the info and you dont on employeess re:their pay, stock position, performance evaluation and more, I am going to beat you to the punch most of the time.

Comment by Francois Guay on September 21, 2011 at 5:55pm
And Bill tell me how a company is paranoid if it's following up on intellectual property theft? Any company would do the same. Thru this IP investigation I found out PI's are great sourcers. Two members of Recruitingblogs commented above they used to be PI"s and are now recruiters. Seems like a pattern.

Comment by Amy Ala Miller on September 21, 2011 at 6:26pm
Francois - how does one safeguard company information (i.e. contact numbers of all employees at the start up) against a PI sourcer such as this?

Ha ha Bill and Amy. You must part of welcome committee. Thank you for the warm welcome. I feel warm.

Comment by Amy Ala Miller on September 21, 2011 at 7:25pm
Awww, come on Francois it's a fair question!  :)  It does seem like you're kind of arguing against yourself though!

Maybe I should have penned an article entitled " The Bullies of RecruitingBlogs.com" instead of Barbarians at the Gate.

Maybe this is what's keeping new contributors from submitting material. Constructive comments to conversations are one thing but some of the behaviors on this board seem to revert back to the little kid on the playground that likes to belittle and bully others. The best way to deal with those bullies is to ignore them, which unfortunately many people who's voices we probably would like to hear are doing once they have been dinged by some rude comment or other unexplained behavior.

Comment by Tim Spagnola on September 22, 2011 at 9:26am
The irony here Francois is that I have thought about writing that same article- several times. I do not want to take away from the original premise of this thread, but could not agree more with the comments you shared from a larger (more general) perspective. We are all recruiters right? or at least have ties to the recruiting community. By default we should all have rather thick skin. I am all for debate, all for offering constructive criticism, but draw a line when it comes to simply being deliberately confrontational. Unfortunately I feel that approach does deter folks from adding their voice into the mix. There is a simple saying - if it hurts- say ouch. Thank you for saying ouch.

I thought the post had some interesting info, and I think it would make sense that sourcers and recruiters would benefit to have investigative skills, since we use them all the time. Two people commented that they did come from a investigator background, and say they are doing well in the recruiting realm at least partly due to that background.

@Francois, you seem to be capable of holding your own. If you feel that you have things to contribute then just share. Some people may like it, some people may not. You may get reactions that you like or dislike - that's part of a community. (I thought Amy's question was just a question, didn't read it as an attack?)