This Session was on a CV Sourcing Tool and was ran by Scott Simmons of Groupon.

Having seen this before I still found it interesting, Everyone knows that sourcers have to constantly make search strings, and most for some reason do not keep copies of strings they make, or the logic behind them.

For anyone who has read my blogs on recreating the wheel this is exactly what I was talking about, not recreating strings over and over again but keeping a repository of strings that can be reused saving you time.. Well Scott presented a very useful way of doing this exact thing. 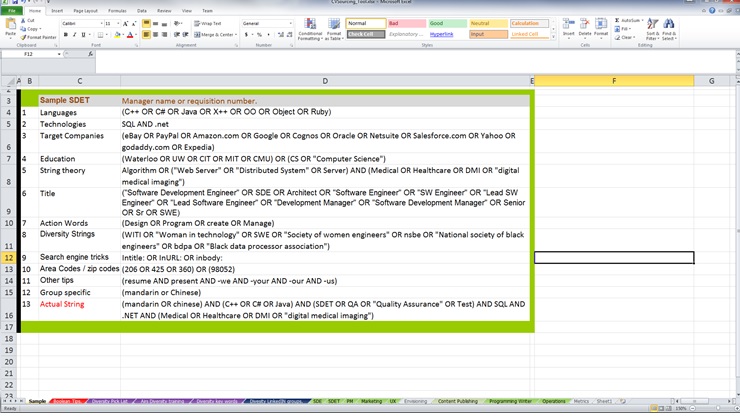 So as you cans see what you end up creating is a bunch of sub strings that when put together create a complete search string, and makes it easy to keep them for future use. I have thousands of strings I have created over the years and I have used this tools for many of them.  It just plain works

This seems to be a mixture of operators working on different search engines and includes some obsolete syntax as well. I'd be very careful saying that it "plain works". Trying these out without further guidance or updates on the search syntax - in search engines specifically - will only lead to frustration.

I am happy to point to specifics; there's also help files to clarify what works where.

Here are some reference links.

Thanks for the input, however the part that just plain works is the fact that the process and sheet allows you to create your strings, and easily maintain them so you do not have to recreate the wheel. I was not speaking to the syntax behind Scotts strings, just to the fact the tool makes it easy to create and maintain the strings for future use.