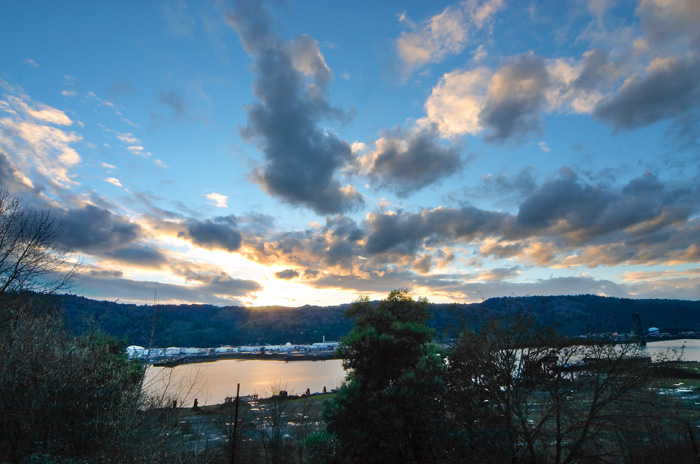 I recently returned from the Florida Kennedy conference and as part of my trip I got to visit my father in Tampa. He is a 40 year exec with technology company that competes with IBM among others. I got to spend time with him on his Birthday along with my boss from Germany. We started talking about great leaders and executives and what makes them truly great. My father got on this kick about focus. He said the single commonality that he saw in them was a deep, unbreakable focus. He talked about Steve Job's ability to focus on the right priorities.

I hadn't thought about the discussion again until about a half hour ago. I am not a big runner but I've been trying to do more of it lately. I grabbed my ipod this morning, threw on some tunes and went for a run. By the way, this all ties together...just bear with me for a moment here. I ran down my street, along the ridge on Willamette Blvd. near the University of Portland, down a dirt path along the ridge and ran on railroad tracks along the Willamette river. I ran by large tanker ships and old closed down industrial buildings. It was an intersection of natural form infused with gothic machine like relics. I cruised by this while listening to my favorite beats. The mix of imagery, rhythm and beat made me forget that I was running. This is important because when I focus on the running itself it's a boring act, my muscles ache, and I feel fatigued. With my favorite tunes and stimulating scenery I'm able to focus on my end goal--run three miles faster than I have in the past and turn my body into a machine.

Towards the end of my run my conversation with my father came to mind, as I was accomplishing my goal. I starting thinking about the ability to focus and how this is critical to success. I also started thinking about how this is very difficult to do in modern corporations. Everyday I get hit with a thousand ideas, pressures, roadblocks, etc. If I focus on strategy and it takes too long people get skeptical, want to do something easier, etc. It's a battle to pick the three most critical things you need to accomplish and make them happen without them being sidetracked, budget cut, death my committee. Yet, that's exactly what my father was talking about with these leaders. They sometimes come across as a$$holes in order to stay focussed; they may seem hyper focussed on something that someone new coming in doesn't have a clue about because what they are focussed on is an end goal established before that person started. And yet they stay focussed, their brains are like laser sights on an assault riffle and they never take their eyes off the target.

Not many people have this resolve. Nobody has it all the time; there are just too many distractions. But think about the parallel with my run. I don't like running but I accomplished it. Many people think the answer is clearing their mind to focus but it's different for everybody. For me I am more focussed at a rock concert than in a library. Quietness makes my brain wonder all over the place. Music and physical energy allow me to get focussed and determined. This is part of the problem with all the pop psychology that is out there...most of it talks about meditation, quiet time, figuring stuff out, bla, bla, bla...how about the complete opposite. Finding the things that get your adrenaline cranking, your blood pressure racing, heart pounding, mind working at full throttle and then go hit your toughest problem. Not everybody needs zen to stay focus.

The other piece to this is the intersection of music, sport and focus. How many people do you know that throw on some tunes when they want to stay focussed on a problem or task. How many people do you know that go for a run at lunch time or hit the gym after or before work to relieve stress? Try combining all three! Seriously. I think you will find it pretty amazing and maybe a total alternative to the zen approach. It makes me think of Rob Strasser, ex CEO of adidas North America. This guy was the brains behind some of our most compelling and emotional campaigns. He was anything but Zen like. The guy bellowed in meetings. Now--I don't think the guy really took care of himself and unfortunately had a short life span. But, he was a creative genius. I see Jobs as the same way---anything but Zen like. These guys have amazing energy, passion; they go at full throttle always. I'm not advocating everybody juice up five shots of espresso in the morning, throw on some hardcore thumping music and hit the gym right after work for a killer hour and a half workout....that's not too far off a typical day in my world by the way...but it's to find your inner focus and not let anybody break it. I meet so many people with amazing ideas but they have no focus and ability to execute them, drive them culturally, push the limits...I believe if you find your way to focus you can do all of these things. So if you tried the peaceful approach to staying focussed and that hasn't worked for you--grab some beats, push your body to the limit and shoot for your end goal if you if you were a sprinter in the Olympics. Oh, and tune out the nay sayers and non believers in what you do.

Tell me how you find you focus?

Comment by Susan Kang Nam on December 1, 2008 at 6:38am
great post Steve.. ~ for me I find focus shifting from priorities sought for that day. Also, somehow (and this may completely be transitional) but twitter has been both pro/cons in helping me focus on my goals. How is it pro? well.. it shifts my thinking with sharing my thoughts and focus my attention to details - opening my eyes to see other perspectives... cons because it can bee quite addictive and can distract yourself away from ur to-do list per se for that hour.. so better managed within a time frame.

Hmm..peaceful approach I attempt to utilize the settings in where I put my efforts to work - some settings def grab my attention (and may motivate) and some do not at all. It all depends on my mood at that particular "time". At the end of the day, I reflect on positive/inner strength as well.. and continue to generate creative ideas.

What motivates me to focus - that's another question I ask myself weekly -- when I find it, I write it down and/or share the details via journaling. Also that first hour of the morning definitely helps if u prioritize on "spending" some quality time to go through the list (within reasons to do a follow up details as well). I recall seeing an interview on one of those early news shows (i mean really early like 5am) -- showcasing this one CEO of a large firm in Asia who got up every single morning at 3AM and first thing he'd do to clear his thoughts and plan for the day would be to soak himself in the icy cold tub, then head to the gym, then off to his office by 5:30AM or something.. Obviously.. I couldn't do that personally however it helped me to focus my attention to those talents out there who tries anything to keep their mind focused.. that impressed me.

Comment by Steve Fogarty on December 1, 2008 at 1:40pm
Susan, thanks for sharing. One point that you make that is very interesting to me is around the CEO that gets up in the morning, takes a bath in ice water and starts his day at 3AM. I love it. In fact I think I was discussing this with Susan Burns once--that a lot of highly successful people have these bizarre sleep patterns and wake up ultra early or work all night. All i can say is that from my perspective the vast majority of people in business recycle old ideas and follow the herd...I think there is something to be said about the unusual behavior that this CEO displays--it's unconventional and that's exactly what we need more of in the business world. There is so much to be done and advanced and it takes this level of discipline and thinking to accomplish it.