Diversity, equity, and inclusion has seen a steady rise in search volume over the last 5 years, as evidenced by the graph below. That is, until June 2020 when it skyrocketed. 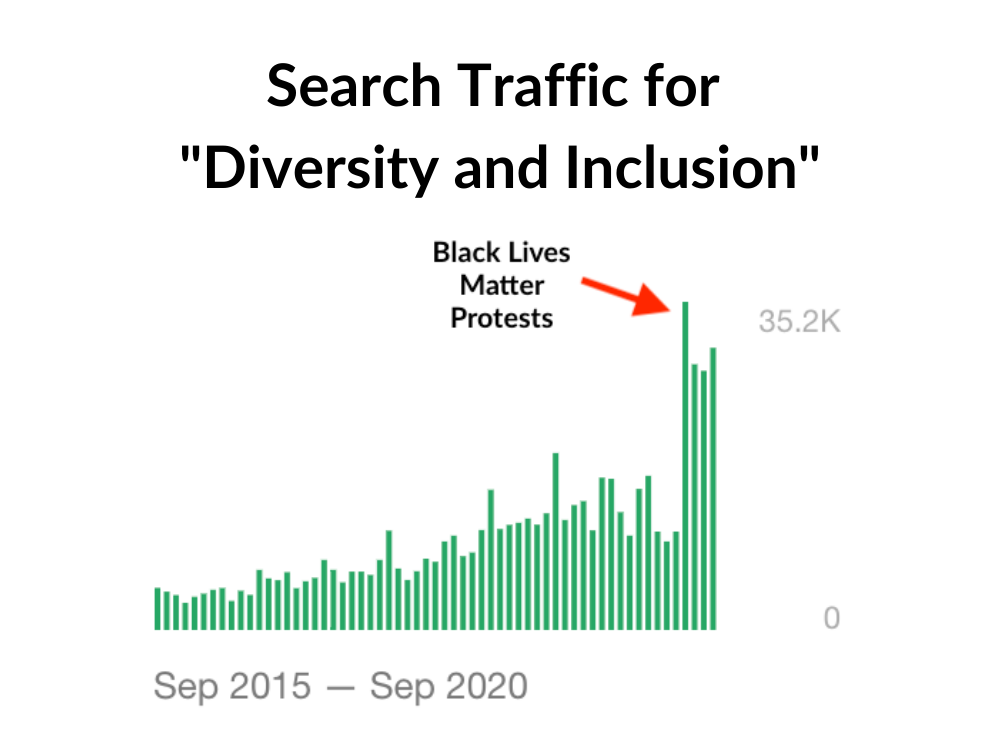 The killing of George Floyd on May 25, 2020 sparked national outrage, a powder keg of racial injustice that exploded after years of buildup. Protests followed, led by the organization Black Lives Matter that have been empowering the social justice movement since 2013.

Suddenly, diversity, equity, and inclusion in the workplace became a topic that needed to be addressed immediately, as evidenced by the rise in search volume. CNN Business found that 44% of millennials in the US are non-white, a major increase from just 24% of the baby boomer generation. In addition, the number of millennials identifying as LGBTQ grew from 5.8% to 8.2% between 2012 and 2017. As the workforce continues to grow more diverse, companies have dedicated whole departments to work towards meaningful DEI initiatives.

Out of the 16,000+ diversity professionals on LinkedIn, there were 574 Chief Diversity Officers. On top of those filled positions, there were 20 new job openings. Together, that’s a 16.2% increase in diversity executive team members over January 2020.

This statistic reveals that companies are starting to take an active role shaping their diversity & inclusion initiatives. Data from McKinsey even shows that companies that champion diversity have a 25% higher chance of financially outperforming those that don’t. Having a dedicated diversity leader on the C-suite payroll ensures that funding and effort are a reality and not just an empty promise. 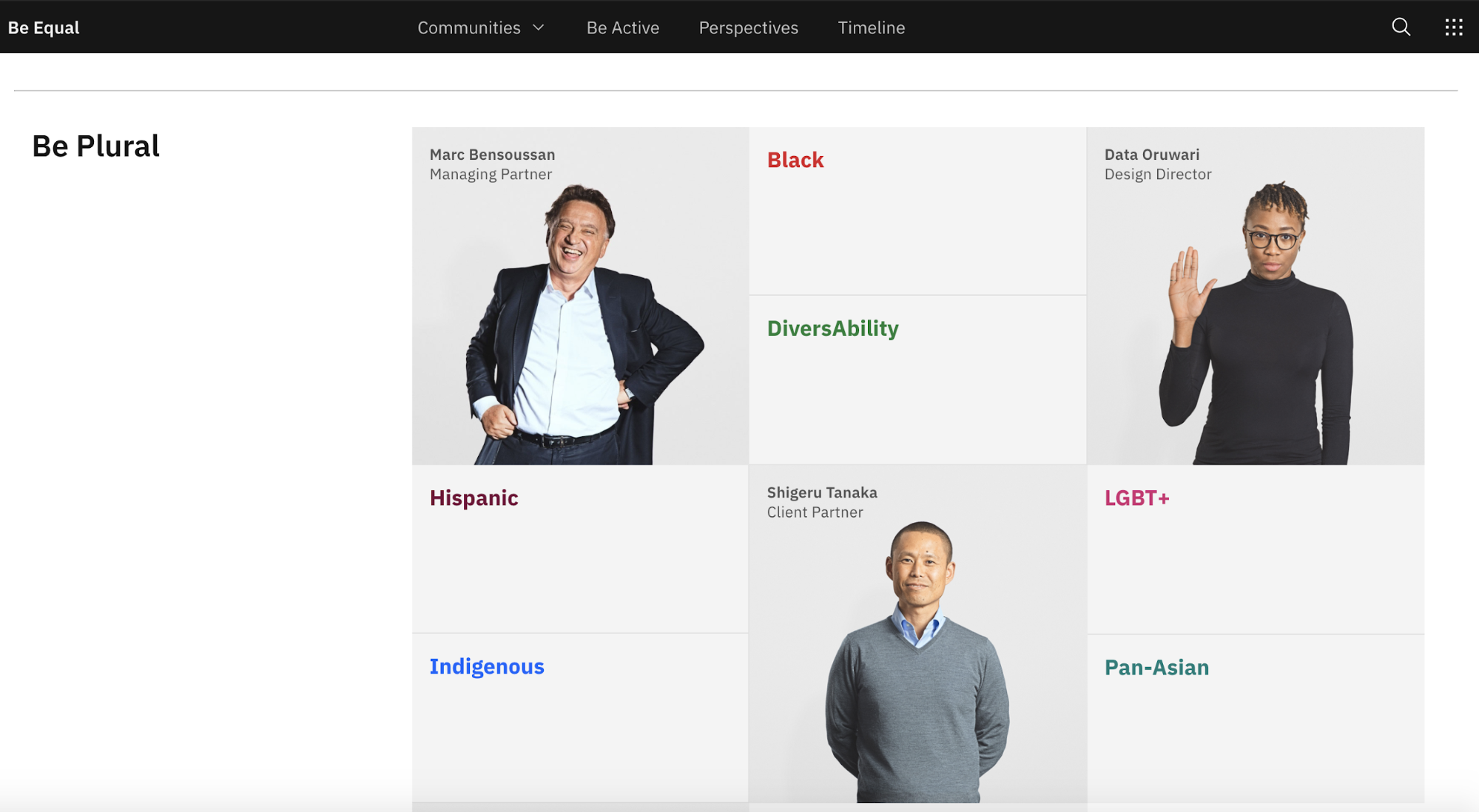 IBM shows its commitment to DEI by having 45 diversity professionals on staff. The long-running technology company has a dedicated equality page on their website as well. The webpage highlights diverse company leaders, provides statistics from their annual corporate responsibility reports, offers insight on allyship, and hosts specific community pages for race, ethnicity, sexual orientation, and disability.

Fastest growing industry for DEI leadership positions is Mechanical/Industrial Engineering, with 71.4% growth over the last year

Diversity, equity, and inclusion has only recently grown out of greater HR functions into its own department. But the results of the study certainly show how important those functions are to non-office work environments.

Therefore, it’s no surprise that the Mechanical/Industrial Engineering industry grew DEI leadership positions faster than any other industry, seeing 71.4% growth. Other industries with high growth include philanthropy and e-learning, both over 60%.

The San Francisco Bay Area is the fastest growing location for DEI positions, with a 19.7% 1 year growth‍

Tech companies are typically on the forefront of the future of work. From being some of the first to offer permanent remote working flexibility after the pandemic to having a seemingly endless amount of on-site perks, they run the gamut.

Therefore, it should come as no surprise that the San Francisco bay area, the hub of American tech, is the quickest to embrace diversity & inclusion leadership jobs. With almost 20% growth from January 2020 to now, tech companies are making a big statement that a diverse, equitable, and inclusive workforce is important to their success. 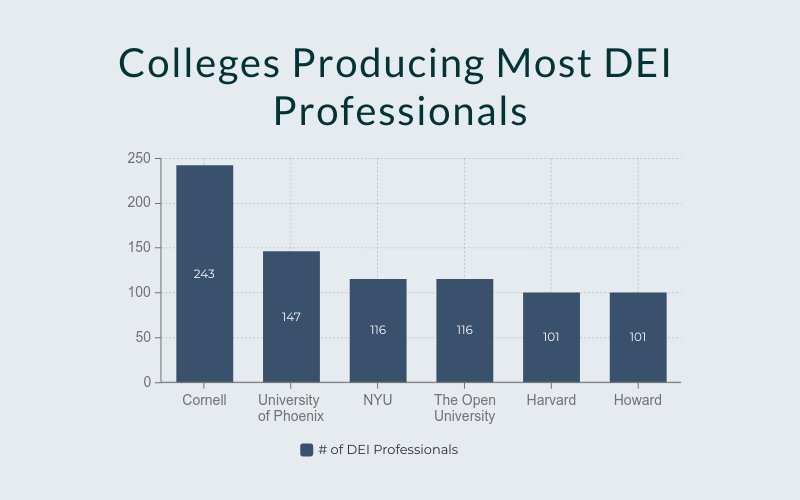 Cornell University produces the most DEI professionals, with 243‍

Cornell University has a dedicated School of Industrial and Labor Relations. According to its website, the school’s undergraduate major focuses on the study of people and workplace policies. They also offer a range of graduate degrees in such fields as Organizational Behavior, Social Statistics, and Labor Economics.

Knowing that, it makes a lot of sense that the largest chunk of diversity professionals are Cornell alumni. Many graduate from Cornell undergrad with the intent of becoming People leaders, while others attend School of ILR graduate programs to strengthen their foundation.

Other schools with over 100 alumni in DEI roles include University of Phoenix, NYU, the Open University, Harvard, and Howard University.‍

Don’t expect DEI leadership to go away any time soon. Glassdoor research found that 67% of job seekers consider a diverse workplace an important factor when deciding to accept a position. As a result, companies are starting to take their role in DEI initiatives more seriously.

However, a 2019 Glassdoor survey unveiled that 42% of employees have experienced racism in the workplace. McKinsey found that 3 in 20 LGBTQ women and 6 in 20 LGBTQ men are afraid their orientation will affect their career advancement. Both studies were only completed in the last few years. There’s still a lot of work to be done.

With diversity leadership teams on the rise, companies are likely to make better DEI decisions. And with a growing number of DEI hiring tools available, companies have no excuse not to bolster their diversity, equity, and inclusion efforts. ‍