Think about the last major purchase you made. For me, it was a weekend getaway and I was trying to figure out what hotel to book. Did you use customer reviews on sites like Yelp, TripAdvisor, Google? Chances are the answer is yes.

Even if you didn't live and die by stranger's sometimes anonymous opinion, it was an important signal in your buyer journey.

The same phenomenon is happening with job seekers. They are using websites like Indeed, Glassdoor, Comparably, FairyGod Boss, Kununu, etc to understand whether or not they want to work at your organization. This can impact apply rates, whether someone spends time prepping for an interview, and whether someone accepts the offer.

Some companies, as reported by the WSJ, have been a bit aggressive in gaming the employer review system. And, the most savvy candidates are asking whether Glassdoor is meaningful anymore, just like consumers should be questioning reviews on sites like Amazon.

Despite all that, reviews still matter, a lot. And, many TA teams aren't spending the cycles they need to in order to put their best foot forward online. They should have a strong career site, talent pipelines, JDs, etc. And, they need to have a strong reputation on employer review sites too...

To illustrate, here's the data from one company that had fairly abysmal Indeed reviews. This was a company that simply had never given much thought to their employer brand, and so the majority of reviews on various employer review sites were from ex-employees with an axe to grind.

The company's rating had started off as a 4.0 with their first review, and over the course of years had fallen into the low 2.0s. This is a 500 person company that has been around for years, and only had six reviews in total.  It just so happened that nearly all of the reviews were negative. Does this mean they have a bad culture? Of course not.

So, the HR team created a list of employees in the company that numbered approximately 1/3 of the overall workforce. These were people who hadn't had bad performance reviews, disciplinary actions, etc. But, it wasn't a super curated list of the very top employees.

They then setup an email cadence to ask five of these employees per week to leave a review of the company on Glassdoor and/or Indeed. They didn't ask for a good review, or for people to embellish what it was like working there. They just asked to share what it's like to work at the company.

If their only goal was to optimize the star rating and they wanted to sink a lot of time into it, they could've definitely done more here. But, it was important to have an accurate portrayal of the company online, not just a lot of reviews that have "none that I can think of" when it comes to the cons section. HR could've just written those themselves :) 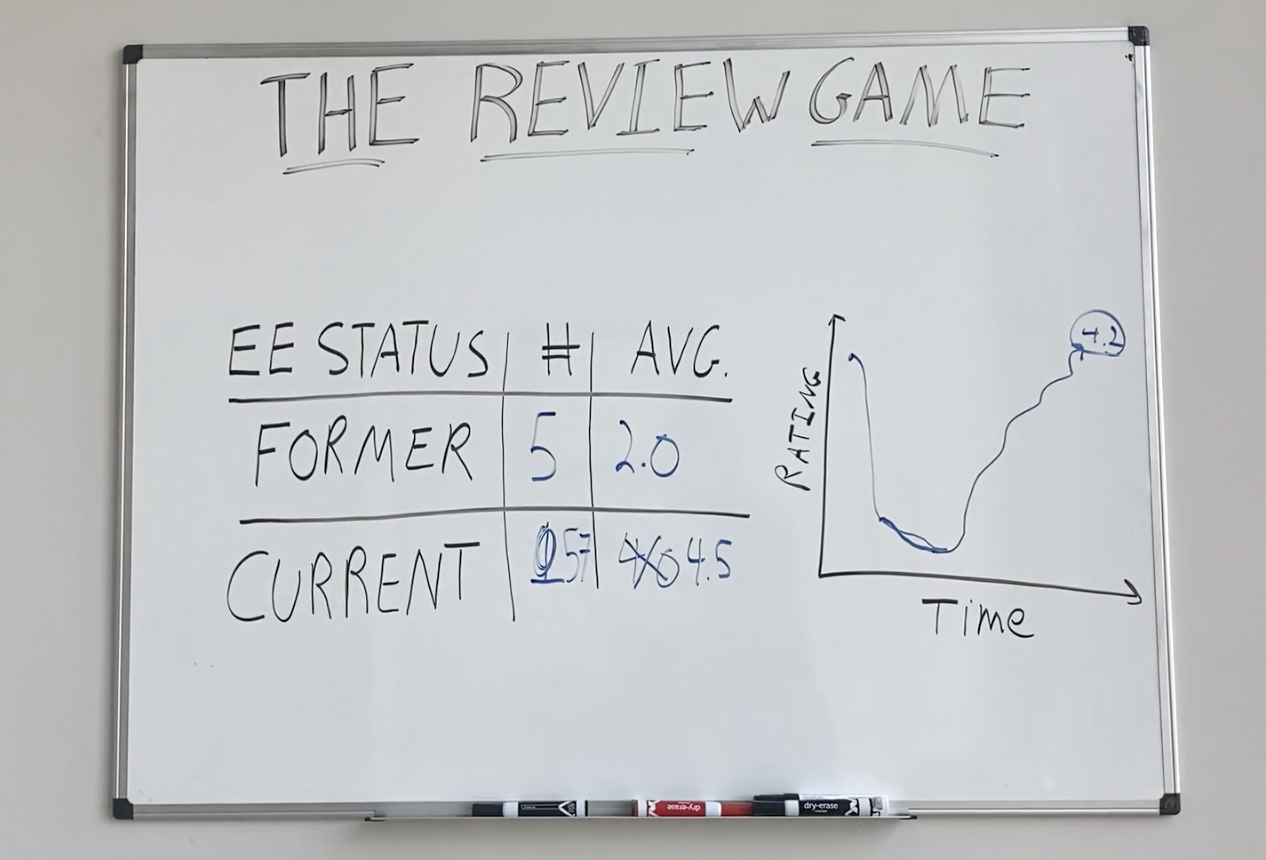 The results were pretty compelling. They collected 56 more reviews in the coming months through very little work on their part. This meant their overall score on Indeed was now a 4.2 as the current employees had given them an average rating of a 4.5.

This might sound high, but the average Uber rating is a 4.6. It's just that a high percentage of Uber riders/drivers leave reviews vs your average employee who never leaves a review.

The key is engaging employees in a way that makes it easy, non-compulsory, and not sketchy ("we need five star reviews, if you feel you can't leave one, let us know why and let's talk about it" - yes we've seen this in an email to employees).

At the end of the day, you can see your score reflected in soft ways - like more candidates coming in prepared as they want to work at your company. But the great thing is that you can also see this in the numbers:

Understanding reviews in general has become a big part of our lives as consumers of personal and business purchases. While trust in reviews remains in flux, this is still an important part of any TA leader's overall strategy. We hope you find this case study helpful!