It’s a feeling like no other. After months of meetings, projections, and gut-wrenching stress, the decision has been made: your company needs to lay people off. You sit in with the managers as one by one, employees are given the hard news, watching them try to keep a brave face as their world shatters.

Layoffs suck. Whether the people you’re laying off are in the office next door or across the country, the results are the same: your company’s decision is taking away somebody else’s livelihood.

But, sometimes it has to be done, right? It’s a tough economy, and businesses have to be sleek, streamlined and agile if they have a hope of surviving.

The thing is, layoffs don’t only hurt the people you’re laying off. They hurt your company too. First of all, they hurt its external brand. Think about it: would you be more likely to invest in a company that is growing and hiring, or one that just laid off a quarter of its staff? When a company lays people off, it sends warning signals about your financial status.

But one thing you might not realize is that layoffs REALLY hurt your employer brand.

How Layoffs Hurt Your Employer Brand

In the past, if layoffs took place, the people affected would grumble to their friends and loved ones. But it rarely went beyond that. In today’s global talent pool and online community, however, things are very different.

One prime example of this is on Glassdoor. We’ve looked at the Glassdoor reviews of companies who have undergone heavy layoffs. And without fail, their Glassdoor rating has dropped, with less than glowing reviewer commentary. The following chart shows the highest Glassdoor rating of companies before layoffs occurred, and their ratings as of February 2017: 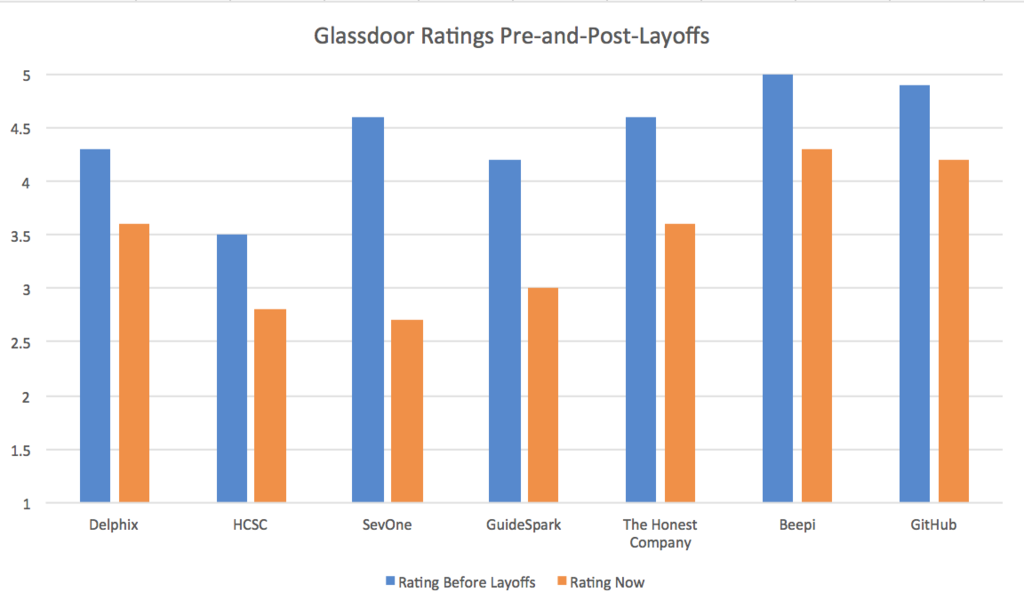 HCSC (Health Care Service Corporation) is a large health insurance company, employing over 22,000 people.  And, they’re hiring. A bright, talented individual might leap at the chance. However, that same bright, talented individual is virtually guaranteed to look online to see what HCSC is like to work for.  Eventually they will come across review sites and their first stop just might be Glassdoor. There, a different story is told, with a rating that has dropped from over 3.5 to 2.8:

“Many departments (Specially IT) are facing heavy layoffs. Which brings great sense of fear about job security as management is going through huge changes. Lot of contractors play key decision making roles which doesn’t seem to be in company’s best interest not to mention is gives a wrong message to full time employees.”

SevOne is another company that has been hit hard by layoffs:

“This company has lost its magic. They doubled in size from late-2014 to early-2015 and everybody was energized and ready to “ride the rocket”. Last year I would have recommended this Company to anyone – it appears it was a blessing that I was laid off now. I expect we’ll see more layoffs as time goes on. What happened to Culture of AWESOME?”

There is definitely a lot more to employer branding than just GlassDoor reviews. But these reviews do paint a picture of what can happen to your employer brand when layoffs happen — especially if they’re not managed optimally. It’s no coincidence that the companies whose reviews dropped the least are those with reviews stating that the company is a great place to work.

Companies that have weathered the storm

It’s worth noting that companies like Medium and AdRoll have gone through layoffs, but are still going strong.  In the case of AdRoll, their ratings actually increased!  Clearly, a strong culture, and the right procedures in place have allowed these companies to come out unscathed from a branding perspective.  Be sure to subscribe to our blog as we’re looking to do a follow up with folks from either company and get their secrets to success here.

If your employer brand suffers as a result of layoffs, it can make it difficult to attract new talent. Think about it: if you were a bright, talented go-getter looking to launch your career, would you apply at a company that has had three rounds of layoffs in the last two months? Where people are in survival mode, miserable, and nervous about who might fall next? Odds are, you’d run the other way as fast as your feet could carry you.

How to prevent this? It’s a combination of strategic management, good HR practices, and careful employer branding. If your company needs to trim costs, look at other options first. If you do have to lay off people, do everything you can to treat your staff with respect and consideration, making the process as quick and painless as possible for everybody. The very survival of your business may depend on it.

This post was originally published on the NextWave Hire Blog where we write about tips and trends related to employer branding and talent acquisition.