What Cities Pay HR Professionals the Most?

A lot of people will be looking around at new jobs this year, and maybe even new cities to live in. With that in mind, we thought it’d be interesting to take a look at salary data for HR professionals across the US to see what cities pay the most, and the least. On a side note, title matters a lot and we’ve previously found that PeopleOps make more money than HR across almost any level/geo.

One of the greatest aspects of HR jobs is that they can be found everywhere. Across industries and across the country, companies depend on HR to keep business running smoothly. But where is the best place to look for a job in HR? While a lot of this depends on your own personal preference, understanding the salary differences for HR jobs in different cities can help you make a more informed decision about where to look for an HR job.

With data from the Bureau of Labor Statistics, we mapped the average annual salaries for five different HR jobs across 50 cities to help you figure out where your HR job is most lucrative. Here’s what we found. 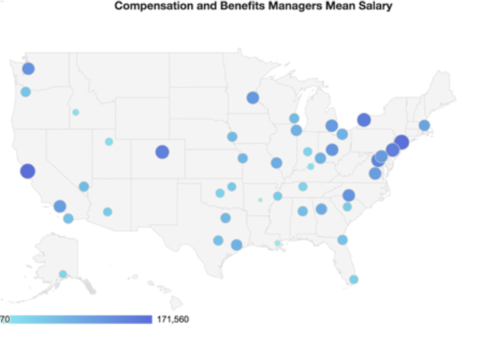 Compensation and Benefits Managers are in charge of planning and overseeing the development of an organization’s pay and benefits structures. They work strategically with executives to ensure an organization’s compensation planning is aligned with business objectives. With the highest mean salary of all five of the HR jobs that we analyzed, it is clear businesses are putting at a high premium on workers who can fulfill these duties.

With a mean wage almost $50,000 above average, San Francisco has the highest pay for compensation and benefits managers, with New York taking the second slot. Philadelphia, Denver, and Washington D.C. are other cities where the average salary is far above the mean. Little Rock is the city with the lowest average salary, while New Orleans, Charlotte, and Louisville also have lower wages for this position.

Of the five HR positions reviewed, compensation and benefits managers have the highest mean annual wage. However, this group also has the widest salary range with the highest and lowest salaries varying by nearly $90,000. 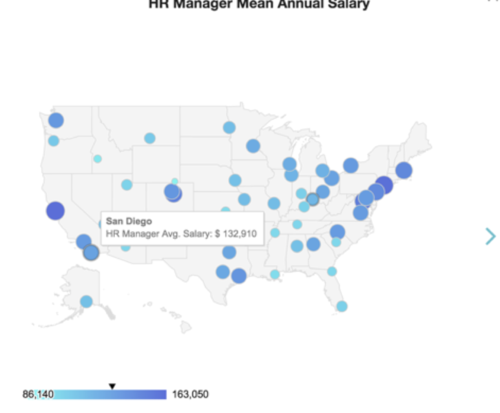 While the title of HR Manager can be associated with a variety of duties and responsibilities, the Bureau of Labor Statistics uses the term as an all-encompassing label for those involved in directing the administrative functions of an organization.

HR workers at this level coordinate an HR team and serve as a link between an organization’s top executives and its employees.

San Francisco boasts the highest pay for HR Managers, but New York City comes in a close second with an annual mean wage of $162,010. Washington D.C. and Denver are also not too far behind. The lowest pay for HR Managers occurs in Little Rock, where the average salary is about $40,000 below the national average. Boise and Cheyenne account for the only other data points below $100,000 for this position. 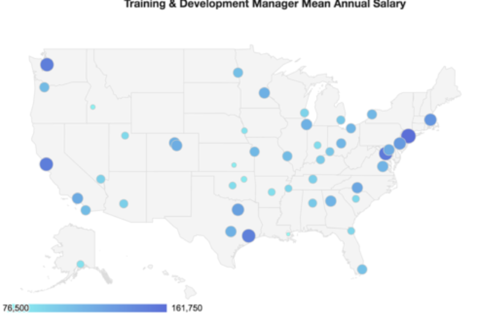 The highest-paid training and development managers can be found in New York City, with an average salary that is $40,000 above average. Washington D.C., Seattle, San Francisco, and Houston are also in the top tier of salaries for this position. New Orleans stands apart with the lowest average salary for training and development managers, but Boise, Tulsa, and Wichita are clustered near the low end as well. 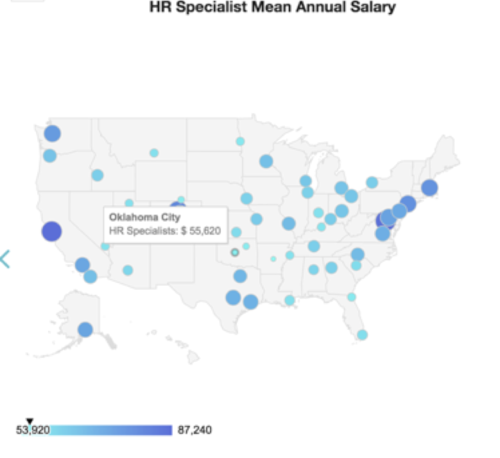 Serving in a lower management capacity, HR Specialists are those involved in carrying out the day-to-day operations of an HR department involving hiring, employee relations, and compensation planning. 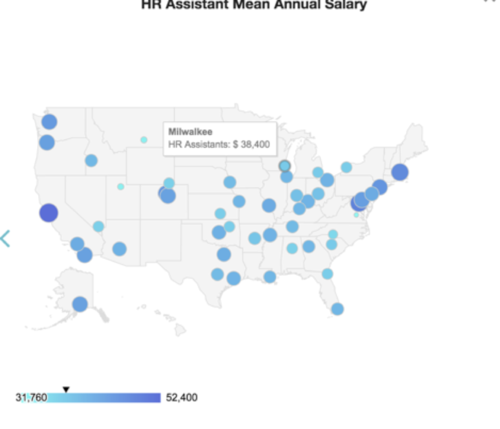 HR Assistants are the entry-level HR workers who handle more repetitive administrative tasks and take direction from upper management. Of all five HR jobs analyzed, HR assistants have the lowest mean salary as well as the narrowest salary range.

For this employment category, San Francisco takes the top spot again with Richmond is at the other end of the spectrum. With average annual salaries of $49,130 and $48,080 respectively, Washington D.C. and Boston are at the high end of the salary scale while cities like Billings ($32,590), Salt Lake City ($32,720), and Charlotte ($36,210) can be found near the bottom.

What the Data Tells Us

While factors such as the cost of living may have an impact on salaries, it is significant to note that certain cities offer notably lower salaries across the board. Little Rock, for example, has the lowest salary for compensation and benefits managers, HR managers, and HR specialists and is in the lower half for the other two jobs. Smaller, inexpensive cities like Cheyenne, Boise, and Salt Lake City tend to have lower salaries across all three levels of employment as well. While they never fall to the lowest salary position, even some larger cities like Jacksonville and Charlotte have salaries that are consistently on the low end of the scale.

On the flip side, certain cities offer consistently higher salaries. For example, San Francisco offers the highest salary for four out of the five positions. New York and Washington D.C. also offer high salaries across the board, with New York reaching the top salary for training and development managers. Boston, Seattle, and Denver also offer competitive salaries for HR workers in all five positions. While the cost of living in these cities does tend to be higher, the significantly larger salaries show that these locations are developing a deeper understanding of the value of HR Talent. With such a high premium placed on HR Talent, there may be a great opportunity to jumpstart your HR career in one of these cities.

Ultimately, money isn’t everything. If you love your job and your city, you shouldn’t be too concerned about finding the most profitable place to be. However, if you are in HR and are thinking about relocating, keeping this information in mind could definitely be beneficial for you and your career development.