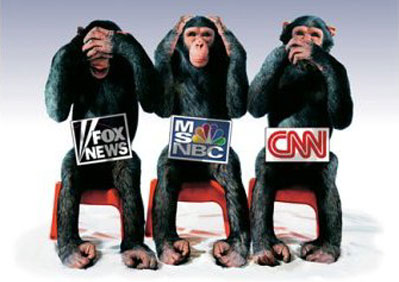 I asked this question over on LinkedIn yesterday: Do you think there is less/more hesitation (from media/populace) in criticizing this sitting American president (Obama) than the last (Bush)? Why?

I asked it because I am startled by the vehemence (though glad to see it) that is arising out of the town hall meetings on health care. Personally, I think there is much more public criticism of this president from the populace than there has been of past presidents and I'm wondering why. So I asked. A whole slew of responses are pouring in, some of them quite vehement as well. A theme, though, is emerging about the media. That theme seems to be summed up by the last response that just went up:
"network media = propaganda...lies...all lies..."

That gets me to wondering. If the mainline media is, indeed, full of "propaganda...lies...all lies" what about other forms of media, like what we imagine to be our own media, here, online?

Are the pundits among us pushing agendas? Do those "agendas" include propaganda and lies? What is propaganda anyway? What is a lie?

Permalink Reply by Harold Ensley on August 21, 2009 at 7:44am
See the propaganda model: http://en.wikipedia.org/wiki/Propaganda_model
- one of the academic authors cited, is a close friend of mine.

I have a tendency to think that the internet is not as bad as mainline media, as the concentration of ownership, and amount of starting up, is not as high. Likewise, there's a lower dependency on ad revenue, and if there's a dependency, it's not as much of a personal/business relationship, often there's third parties involved.

I would argue, a lot of the opposition is a result of propaganda by lobbyists and large corporations. Fear seems to be a large motivator for the population, post 9/11. Ironically this fear is not of failure - unnecessary deaths, bankruptcies, developing world infant mortality statistics.

Propaganda = "the private media as businesses is more interested in the sale of a product — readers and audiences — to other businesses (advertisers) rather than that of quality news to the people". Think if the entire HMO, drug industry, and the amount of money they spend on ads....

Permalink Reply by Harold Ensley on August 21, 2009 at 8:09am
Hard to say - In some situations you can say fear = "loss of the American Dream", and everyone's out to get us... The British as coming...

Some have argued it's easier to motivate people, as consumers, by fear. There's a whole other body of research on this one: http://en.wikipedia.org/wiki/Culture_of_fear
- Barry Glassner has a book on the topic

What are people afraid of?

We only see the vehemence of the town hall meetings being shown as vehemence because it's against obama.. if these same citizens were denouncing bush, they'd be hailed as patriots.

Permalink Reply by Maureen Sharib on August 21, 2009 at 9:09am
If the mainline media is, indeed, full of "propaganda...lies...all lies" what about other forms of media, like what we imagine to be our own media, here, online?

Are the pundits among us pushing agendas? Do those "agendas" include propaganda and lies? What is propaganda anyway? What is a lie?

Permalink Reply by Peter Ceccarelli on August 21, 2009 at 11:44am
If you are a smart person, who has the ability to absorb and decipher information on your own, and then come to your own conclusion, you would then NOT depend on the media as your sole source of accurate information. Most of the press and media in our country is no different than the propoganda delivered to citizens in controlled countries. That's the beginning, the middle, and the end of it. It's a lot like advertising. It's purpose is to control, to inspire a false sense of truth and then to sell an idea/product whether it works or not. Is the internet any different? I think not. But the internet source is mostly OUR point of view. OUR perception and re-filtered in OUR voice (for the most part on blogs) and is that any closer to the truth? Probably not.

But AND however.........the good news is that we live in a country where everyone gets to be heard, or at the very least attempts to be heard and our opinions count even if we're the only one listening to ourselves. So who cares if you liked Bush or have distain for Obama. At the end of the day it doesn't really matter. But our voice does. And the press is mostly slanted by the Party that happens to be behind the corporate curtain. So that means that propoganda will and DOES prevail in our country whether you want to admit it or not. If you want an unbiased opinion from watching the news, then I suggest you go to Europe and get it there. It's a much different slant than what we get shoved down our throats here and it's usually steeped in more of the truth than not. But that's just my opinion.