Climbing Idiots or The Right Stuff for Recruiting Challenges?

My question is:  Are there characteristics in individuals with daring do attitudes that translate well in a recruiter role?  Upsides and downsides?

The next-under pictures are challenges I'll pass on, but I am impressed with those who undertake such efforts and live to tell about them. 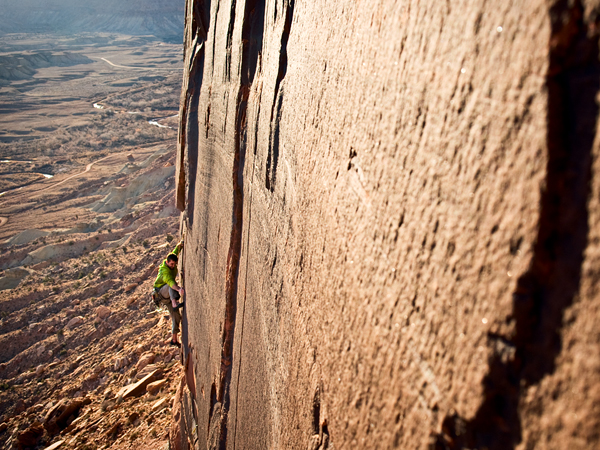 Photograph by Tobias Macphee - and article featured in  National Geographic

"The rock feels a bit like fine-grained sandpaper," says Jesse Mease, seen here trad climbing 70 feet up the route Idiot Wind (5.11c) in Utah's sandstone San Rafael Swell. "Basically I was wedging and torquing my fingers into the crack and scumming my feet along the wall because they wouldn't fit—great fun." With ample pitches to climb and no camping regulations, fees, or rangers, the San Rafael Swell is one of the state's best kept secrets. "I still don't know how to get there—I was blindfolded during the drive in," notes Salt Lake City-based Mease.

“The Swell is an amazing place. You have huge sandstone walls that seemingly run forever in every direction," says photographer Tobias Macphee. "And unlike Yosemite or Indian Creek, you can go days without seeing another person."

“Shooting climbing in the desert is always a challenge," notes Macphee. "In order to rig the ropes to shoot from, you also have to be able to climb the routes,” says Macphee. “For this shot I knew that I wanted to capture more of the open space around Jesse, so I climbed a different route off to the right. I wanted to shoot this route at sunset, so most of the day was spent waiting for that 15-minute window of perfect light. It all boils down to communication and team work,” says Macphee.

I will say, however, that graduating to an even more thrilling and dangerous challenge posed by climbing a giant "icicle" is just plain crazy. Here "foolhardy" and imminent danger seem to be more pronounced--but that may just be me.

Upsides and downsides as it relates to recruiting? "I have been blessed with natural flexibility, but this route was still physically demanding!" says climber Craig Pope of crossing from an ice cave to a free-standing, 82-foot-tall icicle—without ropes or protection. An ice climber's paradise, Banks Lake has one of the highest concentrations of easily accessible ice in Washington. Pope, a longtime rock climber, got hooked on ice climbing three years ago. "I fell in love with the movement, environment, companionship, and danger," recalls Pope, who lives in Moscow, Idaho. "I began ice climbing every day. During the winter of 2009/2010, I climbed more than 400 pitches!"

"For this shot the real challenge was the constant dripping water from the icicles on the cave ceiling above. And there was the small possibility of Craig skewering me with his crampons," recalls photographer Ben Herndon. "I decided to move directly underneath Craig. The trick was to time the shot when he was looking down to find feet placement, so you end up with this sprawling profile on top of the intense eyes."