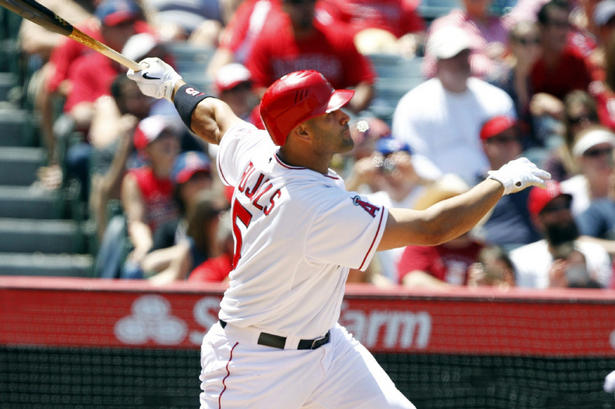 Albert Pujols watches his first home run of the season, in the fifth inning of Sunday's game against the Blue Jays.

ANAHEIM, CALIF.—When Albert Pujols slammed his third home run in Game 5 of the World Series last year in Texas, there was not as much spontaneous dugout celebration as there was in the fifth inning Sunday when the slump-ridden Angels first baseman went deep against young Drew Hutchison. The rally monkey had been lifted from his back, his homerless streak over at 27 games.

That the Angels went on to a 4-3 victory over the Jays and a split of the four-game series became incidental to the really important story for the Halos and their fans.

With Pujols batting and Mike Trout perched on second base, Hutchison and catcher J.P. Arencibia could not get on the same page as to what pitch to throw. First base was open with two out. Arencibia trotted to the mound and then settled back behind the plate. With one swing of his once-mighty bat, the albatross turned into a swan. Could the Jays have been thinking of walking Pujols?

“We’re wanting to get the out,” manager John Farrell said. “We’re in a 2-2 count. He’s got two strikes on him. He struck him out the previous at-bat. He flew out the previous one to that, so at that point of the game, where we are with a left-hander coming on deck and Hutch has done very well against right-handers, no that was not a thought. If he gets his breaking ball to an area that he’s intending to go, it might be a different result. You’ve got to tip your hat. He hit it out of the ballpark.”

How this relates to the profession of recruitment is that droughts will come and go--you just keep swinging for the fences...vbm.