Track and field star Jackie Joyner-Kersee took the Olympic world by storm from 1984 to 1996. Now, the gold medal winner and her husband Bob Kersee (who was her Olympic coach), raise funds for the Jackie Joyner-Kersee Foundation in East St. Louis. Jackie, 50, talked to PARADE about her favorite Olympic memory, how she handled being coached by her husband, and more.

On her favorite Olympic memory.

"Winning is great, but being able to finish my last Olympic Games on American soil was very important. Even though I was injured, I didn’t let my psyche get the best of me and cause me to doubt myself, so I was willing to pull every muscle in my body in ‘96 in order to get the job done and I came away with the bronze medal. In some ways, means more than the gold medals."

On what it takes to be an Olympian.

"It takes dedication, it takes a lot of patience, it takes a commitment, but with the understanding that you need the support of others to really help you. There are a lot of other people that really play a significant role in helping you become an Olympian.

On being coached by her husband (who still coaches) during her Olympic years.

On paving the way for female athletes.

"There are many women who came before me who didn’t really have the same opportunities that I have had. That’s why I always wanted to be a great ambassador — not only today's generation — but for the women who really didn’t have a voice, but who paved the way for me."

On what she's up to today.

"I do a lot of work with my foundation. I also do speaking engagements and I’m involved in the community. Teaching kids about health and fitness is important to me. It’s about being fit for life. Even though I’m not a competitive athlete, I have to still maintain things and try to keep myself fit because I am at that age where I need to make sure to get those regular checkups and make sure everything is in tact."

On the London Games."I'm excited about it, but I’m nervous for the athletes. I want them to do well. I'm looking forward to it being a really successful Olympic Games for our team because in Beijing, it was all about other countries, like Jamaica, so I’m looking forward to these Games in London." Jackie Joyner-Kersee as she lands after the long jump, part of the heptathlon, 1984 Los Angeles Olympic Games.

Jacqueline "Jackie" Joyner-Kersee (born March 3, 1962) is a retired American athlete, ranked among the all-time greatest athletes in the women's heptathlon as well as in the women's long jump. She won three gold, one silver, and two bronze Olympic medals, in those two events at four different Olympic Games. Sports Illustrated for Women magazine voted Joyner-Kersee the Greatest Female Athlete of the 20th century

I had the good fortune to see Jackie Joyner-Keersee compete in the 1984 Olympic Games in Los Angeles and be in the audience at various social and sporting events where she's a very special guest in the St Louis area over the years.  She's another true role model still inspiring youth to stay competitive in sports and careers. 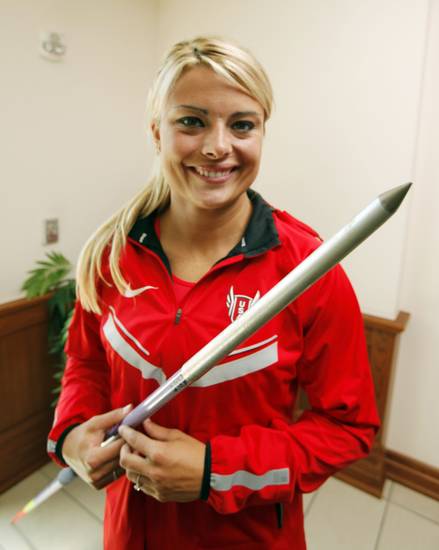 Brittany Borman holds the Nemeth javelin on Thursday, July 5, 2012 in Norman, Okla. which she used on her final throw during the Olympic qualifiers. Borman is among six athletes from the University of Oklahoma who have qualified for the 2012 London Olympics in track and field, wrestling and men's gymnastics. Photo. Photo by Steve Sisney, The Oklahoman STEVE SISNEY - THE OKLAHOMAN 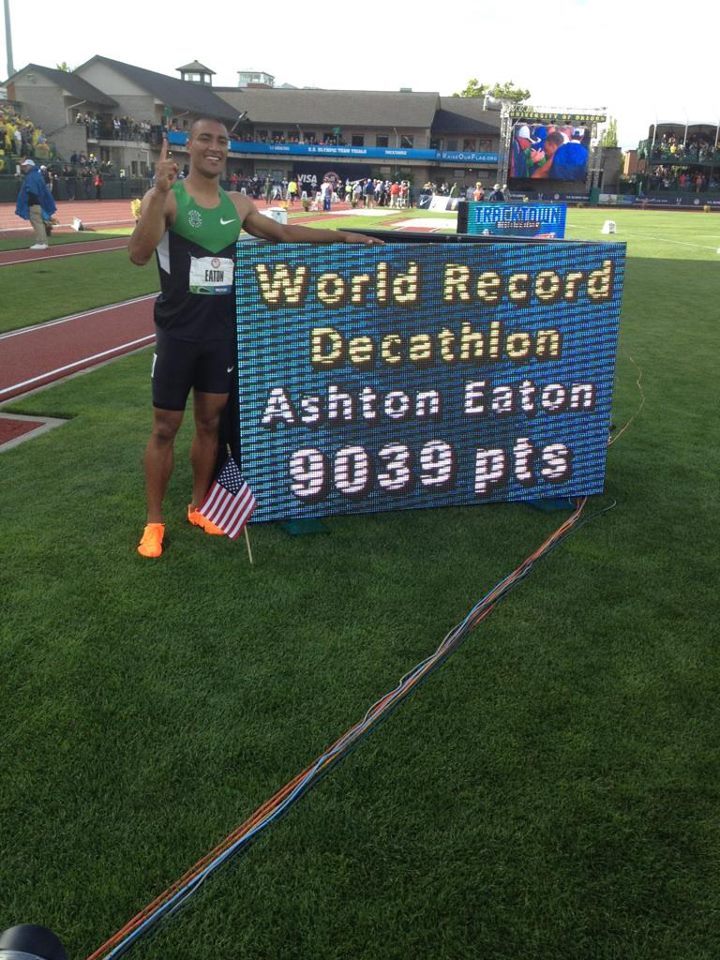 EUGENE, Ore. -- Meter by meter, Ashton Eaton kept swallowing up real estate on a track that has always felt like home.

Second by second, the clock to the side of that track ticked away -- daring him to cross the finish line in a time that would put his name in the record books.

Eaton was every bit as relentless and stubborn as that clock Saturday. He set a personal best in the exhausting 1,500-meter finale and is now the world-record holder in the decathlon -- the cream of the crop in the event that determines the world's best athlete.

"It's like living an entire lifetime in two days," Eaton said.

He finished the grueling two-day event with 9,039 points in the U.S. Olympic trials to beat Roman Sebrle's 11-year-old mark by 13 points.

Eaton joined the likes of Bruce Jenner, Dan O'Brien and Rafer Johnson among the Americans who have held the world record. He did it on the 100th anniversary of the first Olympic decathlon -- and many of the American greats who have made history in the event were on hand to watch Eaton do the same.

He did it in terrible weather -- drizzle, rain, cold and then, finally, sunshine as he got ready for the final 1,500-meter push.

"He was in position for it, and he went for it and there was no letdown," O'Brien said. "The most impressive thing was that he kept up his intensity in this weather."

When it was over, he bent down and put his hands on his knees, then brought them up to cover his mouth. Tears were falling -- elated and shocked all at the same time.

A few minutes later, he took the mini American flag he'd been handed as a newly minted member of the U.S. Olympic team and stabbed it into the turf near the scoreboard that displayed his accomplishment: "World Record Decathlon. Ashton Eaton. 9,039 points." Photographers lined up for the historic shoot. Certainly, Eaton will own a copy or two by the time this night is over. 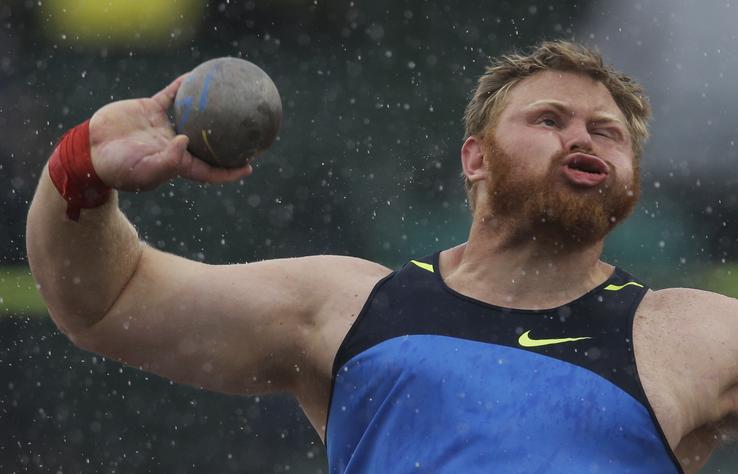 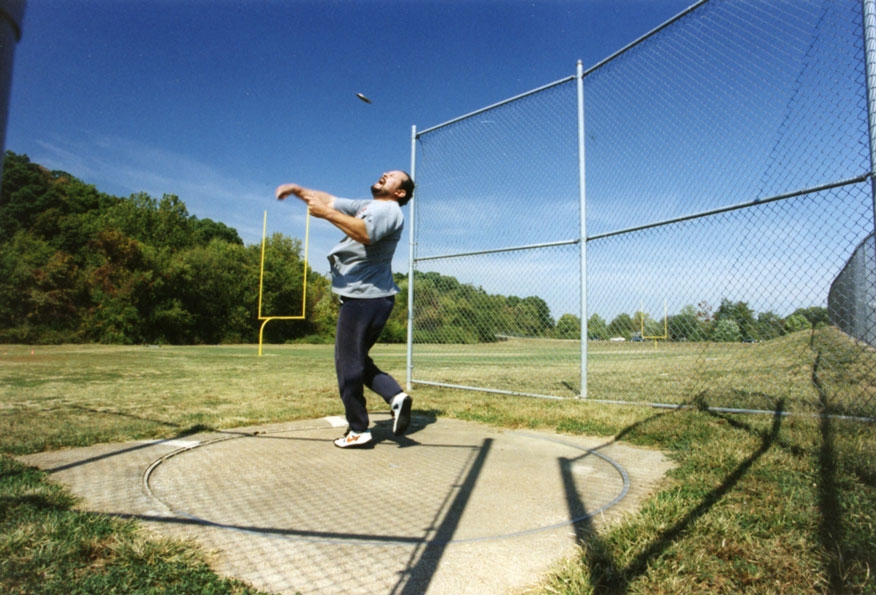 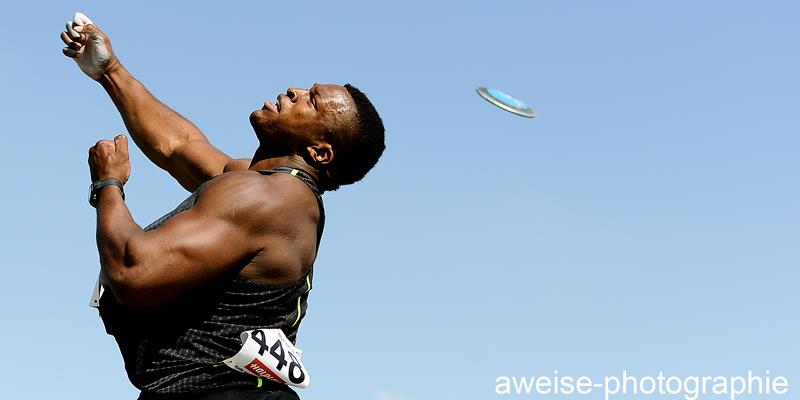 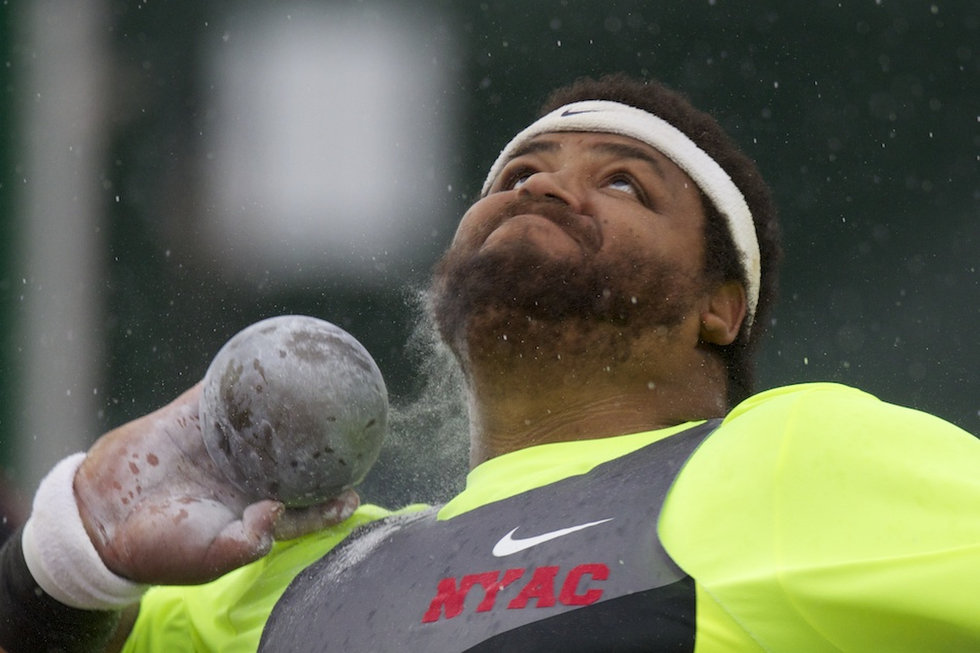 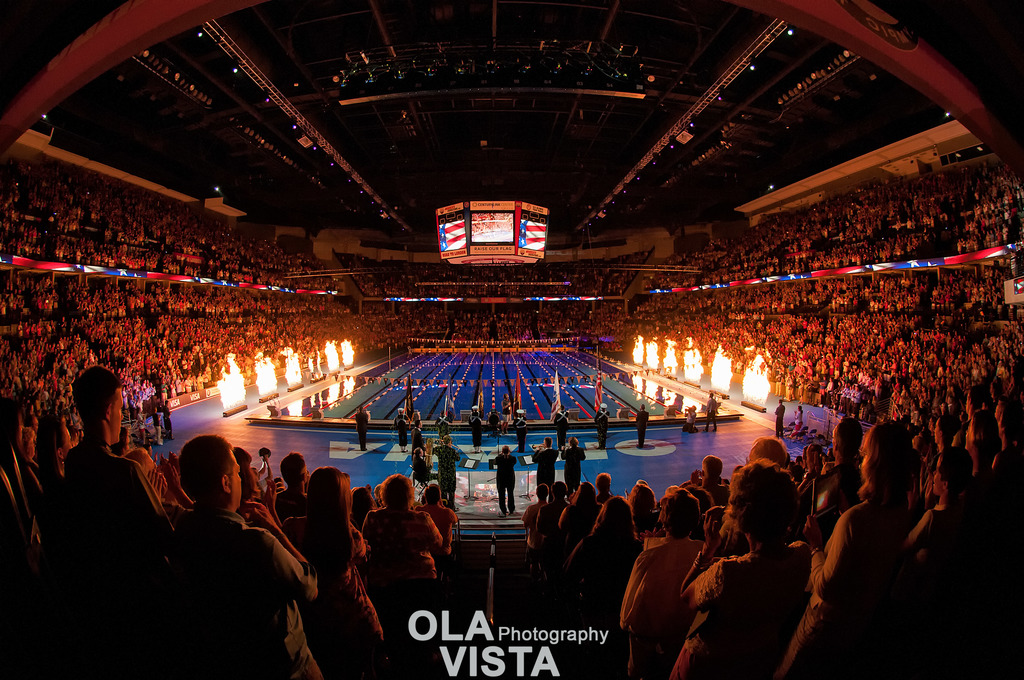 Kudos to Ola Vista Photography for capturing a ...A SPECTACULAR VISUAL BY ANY MEASURE.  The Olympic Spirit at U.S. Olympic Swim Trials at Omaha, Nebraska's CenturyLink Arena. 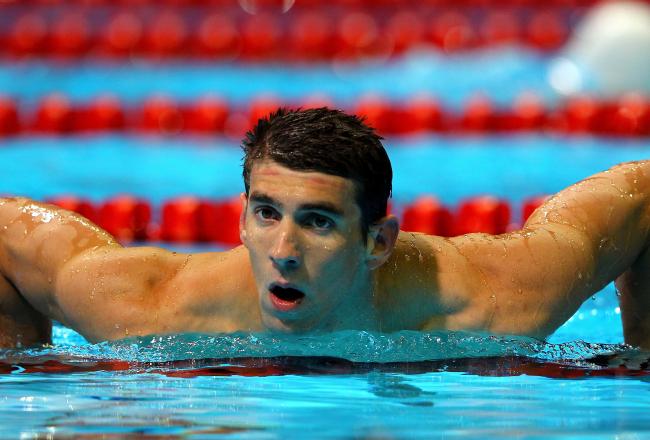 The United States Olympic Committee today announced the 2012 U.S. Olympic Team that will compete in the upcoming London Olympic Games. The 530-member team is comprised of 269 women and 261 men, marking the first time in history that Team USA features more female athletes. The United States will be represented in 25 sports (38 disciplines) and 246 of the 302 medal events that will be contested in London. 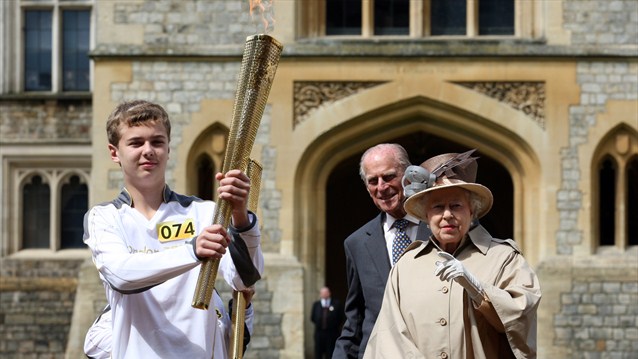 Permalink Reply by Valentino Martinez on July 11, 2012 at 1:18am
The Olympic Flame takes to water at the London 2012 Olympic Games venue, Eton Dorney Lake 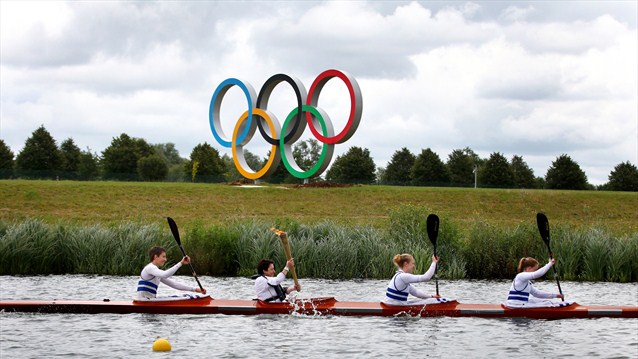 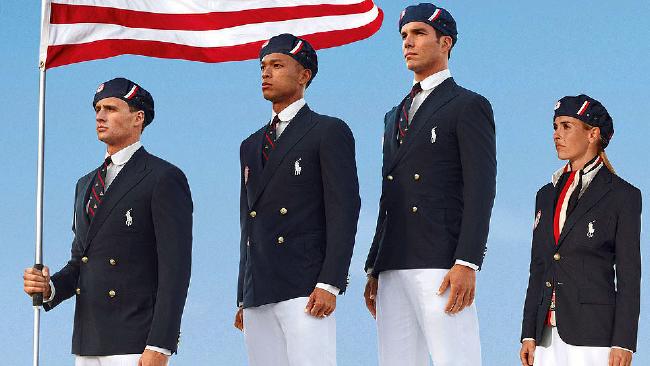 Republicans and Democrats rail about the U.S. Olympic Committee's decision to dress athlete in Chinese-made berets, blazers and pants while the American textile industry struggles and U.S. workers are desperate for jobs. (AP Photo)

I'm interested in finding out what were the contributing factors for the looming problems with security coverage and where the London Recruitment Community is on the subject of the London 2012 Olympic Games security related recruitment and training effort that has apparently come-up-short.   So much so that the government is outraged and has now enlisted additional (3,500) British Army troops to make-up for the expected shortfall in the recruitment and training effort by G4S, the “world’s leading international security solutions group” – contracted to recruit and train the London Olympic Games' security force.

Nevertheless, the clock is ticking on the start of the 2012 London Olympic Games—12 more days.  And “security”, of all disciplines and concerns, has to be at the top of the list for the largest international sporting event in the world—THE OLYMPIC GAMES.

Check it...Those who have never experienced competing in the Field Events of Track&Field competiton, or have, may appreciate this video.

As part of his 2012 London Olympics video series, "How Hard Can It Be?", WSJ's Stu Woo gets two-time Olympic shot put medalist John Godina to show him how to throw. It's harder than it looks.