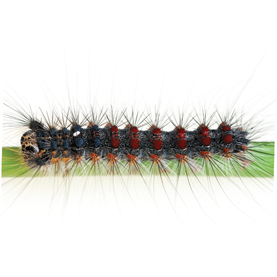 You recently identified a gene known as egt that allows a specific group of viruses to control the behavior of caterpillars. Tell me what it does.
Gypsy moth caterpillars have a normal behavior they do every day. They climb out onto the leaves to feed at night. During the day they climb back onto the branches or bark to hide from predators because they’re very obvious when they’re on the leaves. But once caterpillars are infected with these viruses, known as baculoviruses, their levels of the EGT protein become elevated. Once that happens, you find them on leaves in the middle of the day. It’s like: “What are you doing here?”

And how does that harm the caterpillars?
Eventually they climb to the tops of trees, where they get converted into a sac of virus that liquefies and rains virus particles down on the foliage below so that new hosts can be infected by eating the virus on the leaves. Egt is manipulating the insect to die in the right location to transmit the virus to new hosts.

What is the mechanism by which the gene does that?
In short, we don’t know, but we have a couple of ideas. It was already known that egt blocks molting in caterpillars. What happens when the insects molt is they stop feeding for quite some time; if they’re kept from molting, they’re kept in a feeding state. It’s possible that because they’re being stimulated to keep feeding, they’re staying up in the tree when everybody else is climbing down.

What are some other viruses that can change host behavior?
If you think about rabies, rabies causes the infected animals to come out during the day when they’re normally nocturnal, and their behavior becomes more aggressive. There’s also a really cool virus that is sexually transmitted in moths. It causes the female moth to keep calling for mates by sending out pheromones, even though she already just mated. That way she infects more and more males. Finally, in toxoplasmosis, cats are the primary host, but mice get infected. When mice are infected, they lose their fear of cats, and they’re more likely to get eaten, which allows the pathogen to be transmitted to cats.

What does this mean for humans?
It certainly does suggest that other pathogens may contain genes that influence behavior, even in humans. When you have the flu, you cough a lot, which can help transmit the virus to other people. Is that a symptom, or is it the virus making us do that? And has that been selected for through evolution? Who knows?