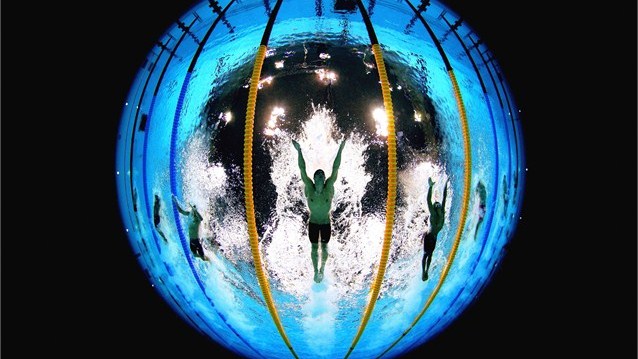 Michael Phelps of the United States competes in the Men's 100m Butterfly Final on Day 7 of the London 2012 Olympic Games at the Aquatics Centre.

Second, kudos to Michael Phelps.  His accomplishment of winning over 18 Olympic Medals has exceeded the record which stood for 48 years.

“In a Los Angeles Times poll, more than 65 percent of voters say Phelps in the greatest Olympian. Jesse Owens comes in at a distant second with just under 14 percent of the voters. And Carl Lewis, a 10-time Olympic medalist, including 9 gold, and who won 10 World Championships medals, including 8 gold, came in third with around 7 percent.“

Michael Phelps is certainly the most decorated Olympic Athlete.  Whether he's the greatest Olympian ever depends on how one regards "greatness" in the context of the Olympic Games.  For me Michael Phelps is certainly the greatest Olympic Swimming Athlete to-date.  However, his records, medals and impact is in one discipline--swimming.  And some of his medals depended on a team effort.

For me the Greatest Olympic Athlete is the Decathlete and Hepthlete because these champions excel in a grueling multi-event competition of running, jumping and throwing events that test an individual through a greater variety of totally unrelated events that have to be mastered to the degree to be the best in the world. 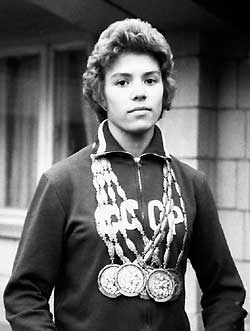 Larisa Semyonovna Latynina (Ukrainian: Лариса Семенівна Латиніна, Russian: Лари́са Семёновна Латы́нина; born December 27, 1934) is a former Soviet gymnast. Between 1956 and 1964 she won 15 individual Olympic medals and three team medals. Her total of 18 Olympic medals was a record for 48 years until surpassed by American swimmer Michael Phelps on July 31, 2012. Although Phelps broke her total medal count record, her record for individual event medals (14) still stands. She is credited with helping to establish the Soviet Union as a dominant force in gymnastics.[1]

"Bolt has sprinted hard into immortality; he is indisputably the fastest man ever, and maybe one of the most cheerful, too. It doesn’t hurt that he knows how to freeze for the cameras while we’re still trying to recover from the breathless shock of watching him run. But Bolt himself knows that his claim to sit atop the Olympic pantheon with double golds in the 100 and 200 is nonsense. His boasting, “I am the greatest athlete to live, I am a living legend, bask in my glory,” was just a lot of noisy post-victory exultation. He may not even be the best in the Olympic stadium according to the decathletes. “Just because you’re fast doesn’t make you an athlete,” silver medalist Trey Hardee said."

Olynpic Champion Bruce Jenner also weighed-oin on the Bolt boast -- and he is right about Olympic Decathletes have a larger challenge vs. Olympic Athletes with fairly narrow focused competitive events.  And who better than an Olympic Gold Medal Decathlete to weigh-in on a discussion on athletic greatness in the Olympic tradition?

The competitive athletes and loyal sports fans in the room know and respect past and present champions regardless of the sport.  Each of us has an idea about what is great and greatness.  Sometimes it comes down to the effort and the accomplishment...like the marathon champion Abebe Bikila who won the gold medal for the Olympic Marathon in 1960.  Bikila BTW was a last minute substitute for an injured team mate.  Winning a gold medal in one of the more formidable races known to humankind is significant anywhere, but doing it against the best in the world magnifies the accomplishment.  Then there’s the fact that Abebe Bikila who won the 1960 Olympic Marathon running with no shoes.  The Adidas he was given did not fit.  Bikila ran and won the most demanding competitive and illustrious footrace in the history of the Olympic Games -- barefoot.