TEDxSF, find a TED Event in Your Area

I managed to secure an invitation to TEDxSF, an independent version of TED, at the Academy of Sciences in Golden Gate Park. I've never been to the Big TED conference but I've been a fan of the videos on the website for years. Calling TEDxSF a conference is not doing it justice. The event was more like a series mini-performances featuring musicians, entrepreneurs, scientists and change-makers.

All in all, independent TED events, TEDx,… Continue

So here's the deal. For the past couple of months, customers using our applicant tracking software have been asking for an efficient way to acknowledge candidates that don't make the cut. At first blush, this seemed easy enough. But, as our product team began researching and designing the feature, all sorts of complexities became evident.

We call it “Support Driven Design”. I’ll explain this concept in just a bit, but first I’d like to give you some background on how we came to believe that free technical… Continue

Wouldn’t it be nice if you had an applicant tracking system that would store resumes in one place that you could search easily any time? How great would it be have applicants apply to one place? You could finally get rid of all of those email folders. And, how helpful would it be to be able to automatically track where all of your applicants are coming from?

Make it easy for applicants to apply for jobs right on your company’s website. Sign up for… Continue

Hiring the Newton Way: A Framework for Interviewing Knowledge Workers

To say that I think a lot about recruiting and hiring is an understatement. Before I co-founded a technology company that builds recruiting software, my business partner and I, started and ran a couple of recruiting firms, an RPO and over the years managed dozens of corporate recruiting departments. In addition to helping countless other organizations hire, we’ve had to build quite a few of our own teams over the… Continue

When will Applicant Tracking Software Get the Message?

The message above was sent to a prospective candidate from an applicant tracking system -not ours. This system is managing a fortune 500 company’s careers site. Yikes! It can hardly be debated that… Continue

Last week we joined the Silicon Valley chapter of the NCHRA at Hakone Gardens in Saratoga, CA. The evening event billed as the Summer Social brought together members of the regional HR community including some interesting guest speakers and local vendors.

We want to quickly share some of our takeaways from the event.

Why We Built Instead of Bought: The Genesis of an ATS 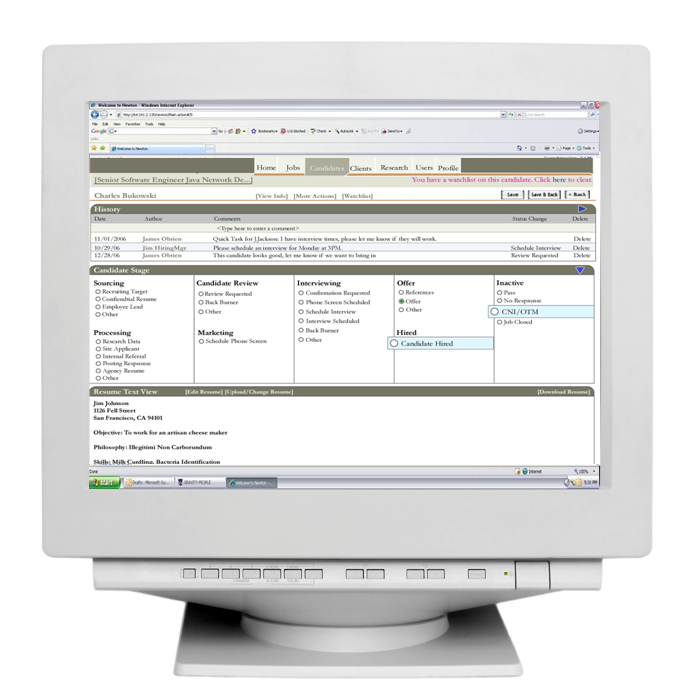 OG Newton Interface Circa 2005. We've since ome out of the dark ages.


Does the industry need more recruiting software? Many think not.

We think that as long as the current offerings do solve the major problems, there is room for competition.

Recently, I received a request from an industry analyst to outline our history. Unknowingly, she made a in January 2009. Little did she know. But, how would she know? No one… Continue

Why the Recession is Good for You, the Buyers of Software. 3 Emerging Trends From the Fishbowl

“You better start swimmin' or you'll sink like a stone. For the times they are a-changin’”
Bob Dylan

A couple of weeks ago I learned that my co-workers call the office that I share with our CEO, “The Fishbowl”. The Fishbowl is the nerve center of Newton Software. Given our small footprint, the Fishbowl acts as the design studio, front office, communications center and test lab. Sometimes our co-workers might say it more resembles an… Continue

“Our Age of Anxiety is, in great part, the result of trying to do today’s jobs with yesterday’s tools.” Marshall McLuhan

I was at a barbeque in San Francisco this weekend and while everyone agreed that it’s nice that summer has finally arrived, our conversation inevitably meandered into talk of work and our summer work intentions. Alex, a partner in a small marketing consultancy, remarked how he planned to lay low and enjoy the summer, taking… Continue

Newton Software has debuted the Newton® Affiliate Program, a third-party sales program for its smart, easy-to-use, recruiting technology, Newton®. The program allows qualified individuals to refer Newton® to friends, contacts, and companies and earn a percentage of the revenue generated from each sale. Ideal affiliate partners include agency recruiters, contract recruiters, human resources consultants, and other service providers.

What's in a name? How we screwed up naming in Newton once and why we won't ever again.

Be really (really) careful how you name things. And, NEVER use the same word to describe two different things.

Sloppy naming can lead to minor frustrations, or it can lead to some really big problems for your users. The road to sloppy naming is paved by the careless use of synonyms or by naming two different things with the same word or phrase.

First of all, let’s look at synonyms (the more obvious of the two naming blunders). When considering a naming framework for… Continue

If you need to explain how something works, it probably won’t. Why designing ATS software for the critical users matters.

At Newton, we believe that the people who use our software the most aren’t necessarily the people that are critical to its success. Our “Critical User” is the person that uses Newton intermittently, every now and then, once a day, once a week, or maybe even less.

Up to this point, companies have designed business software almost entirely for what we might call a “Power User”, i.e. people that are going to use it day in and day out. If you… Continue

I was recently asked to speak to a group of Human Resources professionals about emerging trends in recruiting and Human Resources technology. The moderator of the group asked if I could send some preview collateral, a PowerPoint or PDF, that he could distribute to the group prior to the meeting. Having created, reviewed, deleted, ignored, and edited thousands of PowerPoint’s and PDF’s in my career, I decided that I was going to do something different. Knowing that most audiences have a very… Continue

How’s the market? I can’t even begin to guess how many times that I have been asked this question. Having worked in and around recruiting for over a dozen years, people assume that I see trends in the labor market that can indicate the overall health of the economy. To a great extent this is true. The companies that I have helped start and run for the past 10 years are proven leading indicators of market conditions, especially for the technology markets: people stop hiring when things get… Continue