In the world of recruitment, there is also a shift required to more gender smart recruitment advertising.

Changing your ads
Job advertisements on job boards would typically provide a brief paragraph with information about the company, followed by some description of the role, as well as some of the responsibilities attached to the vacant position. Some clues or filters would then be provided in terms of competencies that applicants should have, in order to be considered.

Despite the great advances we have made in technology, all that has happened today is that the same ads that used to be published in newspapers are now being replicated on job boards. As result, we have seen a massive increase in quantity, but quality has in fact deteriorated. Often ads would include some basic errors, and sometimes some grave ones.

Why Should I Apply?
These job ads are usually doing a reasonable job of providing limited information about the job, but usually fail to encourage the job seeker, particularly the passive job seeker that may just glance at an ad, that the recruiting company is offering a real career.

Often in job ads there is a discrepancy between what recruiting companies say and what they have done. This perception difference between external perception and internal reality is the driver for employer branding initiatives.

Lack of awareness
There is still a major lack of understanding or awareness of how job advertisements are demonstrating that the organisation was attractive to women and in what way. Recruiters would expect applicants to access the company’s web site, but not be thinking about how the organisation appears to women, when the board and executive team photo’s clearly highlights the lack of senior women leaders.

As an aside, there is ample opportunity with hyper links, to facilitate and influence this search process by directing prospective applicants to relevant information on the company’s web site.

Adapting the recruitment process
Gender balanced organisations have adapted their recruitment approach to include those themes that are the most likely to be of strong interest to women, focusing on flexibility, the culture, collaboration, and opportunities for development.

There needs to be an alignment and consistency of what the recruiting company is saying and what it is doing. Progressive organisations will always ensure that there is a person that applicants can talk to and discuss the role and potential opportunities in more detail, rather than directing applicants through the applicant tracking system, without any conversation.

Perhaps an example will better illustrate my point. Real estate agents have been very effective with advertising houses, using pictures and being able to tell a story. Now I am not suggesting that recruiters should apply the same creative license, but one thing real estate agents are doing well is to convince buyers that they are selling a home, not just a house.

This was really well illustrated by the popular Australian movie – The Castle. In this movie, the Kerrigan family is threatened by the compulsory acquisition of their family home, which is not just a house, but in their eyes – their castle filled with memories that can’t be replaced.

Telling a story
Writing a good job ad takes time, particularly we make the transition. Working with a HR team recently, we devoted half a day to finalise the ad for a role that was really difficult to fill. Every job advertisement should tell a story. It takes more than just a picture of a female.

Rather than using words such as challenge, drive, determination and results it may be more effective to use language such as opportunities, engage, contribution, partnership, team, relationships and outcomes. This is not about being politically correct, but to be more aware of the subtle messages we communicate to applicants.

Language is very powerful and unconscious bias may impact negatively on our ability to attract talented staff, particularly if a company is trying to attract and encourage more females to apply for certain roles. Gender smart organisations are aligning their HR systems and processes to achieve a better balance in talent management.

If you have any ideas or suggestions please share your views.

Comment by Nate Fischer on July 8, 2011 at 3:22pm
Interesting article; however, it would seem to mislabeled.  I understand your statement; however, it doesn't really seem to state where the disconnect is between women and men when it comes to advertising.  It shows the crappy job us recruiters put in our advertising in general, not just a general gender bias.

I like this post charles.  Words are powerful tools.  When we can effectively take buzz words out of our language and start using words that have meaning it is amazing what the results can be.

One of the most effective lines of type i have ever used to attract a female candidate was, "This client understands that children  and education are important to it's employees."

what that seemed to parse to candidates was that if mom needed to get the kids to school or attend a school function the employer agreed with them.  There were a lot of dads who liked it too.

Thanks for all the feedback

@ Nate - agree that ads in general are "crappy", but there is also a real lack of awareness - we don't know what we don't know. I added my concern about poor ads as it is a general malaise that the recruitment industry suffers.

@Sandra - thanks for the great example - much better than using the overused "family friendly". In company it meant attending the annual children's christmas party.

@Valentino - fair comment about my selected photo, though the focus in listed companies is at the senior end, it should be about building the talent pipeline. The general thrust of my article is however about gender smart advertising, not about specific recruiting strategies for appointing more board members or executives.

(REVISED) While I agree with your interest in promoting "gender smart" organizations and your mention of the need for recruitment Ad copy (verbiage & photo) with strong visual & message impact to attract women more favorably.  In particular "focusing on gender equity at board and executive levels"...yet in your prompt, which amounts to a "Promo Ad", if you will--you use a photo of twenty-somethings, or younger.   Is this your idea of what executive board members and corporate executives look like?  Young in fact or young at heart?

I would highly recommend more sensitivity to your target audience, particularly if you are going to use an impacting photo that does send powerful and confusing message at the same time--in this case a very "youthful photo"--unless of course your representing:

...and I doubt if  even a&f 's board & executive levels are all composed of twenty-somethings or younger. 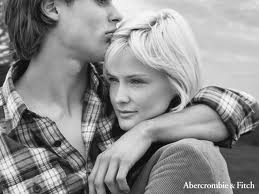 Thanks for an interesting artcile Charles. I agree with the principal of being more targetted with our advertising and if that applies to gender, as well as other demongraphics, then let's apply the theory.

The artcile and subsequent comments also highight the generla problem of poorly written adverts. I recently published a blog about the tendency of recruiters to over use superlatives in their ads which you can find on Recruiting Blogs and as stated in there it is my very worst pet hate of recruitment. More than anything else, because it is the outward and very public voice of our industry, badly written ads diminshes the professionalism that some of us strive so hard for.

Hi Luke, thanks for your comments. I suspect part of the problem is that we don't spend sufficient time writing these ads. Because of lack of time we take our most recent ad that was for a similar roles and then do a quick cut and paste job.

Many ads fail the acid test - why should a passive candidate that is happy in her or his current role apply for the advertised role - house versus home.

I particularly agree with your sentiment that badly written ads also diminished the professional image of recruiters.

Comment by Tom Dimmick on July 11, 2011 at 3:35pm
Each Corporation or Organization has unique needs.  Each position with those organizations has unique components in the make up of the requirements.  Therefore; each recruiting specification (ad) should focus on those unique attributes.  Frankly, gender should not be the determining issue.

Hi Tom, thanks for your comments and I fully agree that companies have different needs. What we need to consider, and in my view change, is for companies to be more gender balanced in the way we design roles and the way we recruit. Rather than using quotas and gender ratios, I am suggesting we think about how we attract females into certain roles by increasing our own awareness.

The more I am working in this space, as a middle aged male, the more I am learning about the hidden messages we include in our recruitment, intended or unintended.

Comment by Gavin Redelman on July 14, 2011 at 8:09pm
Great article Charles - Very interesting, thanks for sharing !
You mention in your opening paragraph "As result, we have seen a massive increase in quantity, but quality has in fact deteriorated." - It reminded me of an expression I used to hear on a daily basis working for an unnamed recruitment company ..."If you throw enough mud against the wall, some of it is eventually going to stick" - It seems as though in today's technological world we live in it's become quantity not quality.