We Owe Them Their Dreams

Cross-posted to The Green Suits: 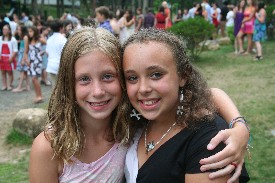 Today at breakfast I looked across the table to my daughter who was pulling herself together for her first week in fifth grade. I was filled with pride and excitement, but also much anxiety. And I wondered to myself: what have I given her to dream about?

But when I asked my daughter the same classic question today she shrugged, then plugged in her iTunes.

In that respect, I fear my kid is like others in the vast Millennial cohort. Tuned out? Perhaps. Dream deprived? For certain.

When I--a late Baby Boomer--was her age, I looked up at the evening sky and wondered aloud about the next moon shot. During the Space Age, our imaginations ran wild. And our futures seemed limitless.

Many of her peers look down at their smart-phones and wonder "who IM'd me?"

Later, I logged on for some quick online reading and I immediately stumbled upon New York Times columnist David Brooks' latest op/ed Where the Jobs Aren't, a sobering piece about the best of [green job-producing] intentions gone awry. In it, he writes:

"The gigantic public investments in [green energy] may be stimulating innovation and helping the environment. But they are not evidence that the government knows how to create private-sector jobs.

A punch to the gut that was.

Yet, I still think there is a causal relationship between a big positive turnaround in the job market and encouraging our children to dream big dreams. As people become fully employed again, many will connect with great jobs that will launch satisfying careers.

As they dream. They will innovate. And as they innovate, they will create new opportunities (for many who follow them).

And yes, these developments will yield so-called green jobs. Whether or not my daughter pursues a "green" career is for her to decide. Still, we owe her--and her generation--their dreams.

And let's teach them to DREAM BIG.

Comment by Doug Munro on September 7, 2011 at 10:32am
That's a fantastic sentiment. Any parent, any human being for that matter, would want this for our children. I hope we can all nurture and encourage their dreams.

Being someone who graduated college in 2009 (when it felt like the job market couldn't be any worse), I found that many of my friends and I all lost a little hope with the idea of our dreams coming true.  Yes, I was that big-eyed student trying to soak up as much information as possible ready to take on the world before I graduated.  Then, once I started the job hunt, I realized - my generation has to settle.  We have to settle for mediocore jobs in fields that are probably not even close to what we dreamed of our entire life.  Granted, I went through many dreams and changed what I wanted to be when I grew up every so often, but I still think about that "dream" job that I don't have because it just wasn't in the books.  The job I have now is amazing and I love being a recruiter, but sometimes I look up to see a plane stretching across the sky and think "What I would do to be that pilot."  Maybe one day. :)

To wrap up my rambling, I think that our generation is really just afraid to dream - afraid our hopes will get crushed.  Everyone is taking the safe road by picking fields that are still hiring.  It's a sad reality and hopefully, one day soon, we can remind kids how great it is to dream and to dream big.

Great post, Dan. Having a son in 5th grade, can relate to what you are going through.

I try to emphasize to my kids, that the world is getting flatter and just being an American is not an inherent advantage. They will have to earn it.