Should Succession Plans Be Disclosed? 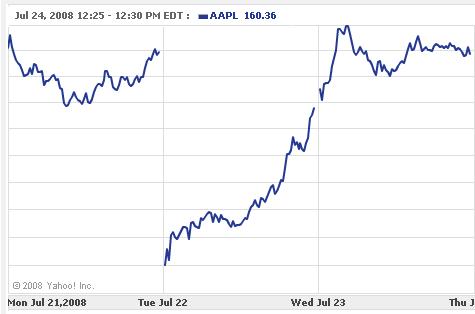 Apple's stock price went on a roller-coaster ride last week in response to rumors about its iconic CEO's health. Jason Corsello raised the question of whether this suggested that companies ought to disclose their succession plans publicly. My answer depends on what one means by "ought to disclose."
If it means, "a company does not want to see large movements in its share price then it ought to communicate succession plans to investors," then I would agree. As AAPL's example shows, a company led by an iconic CEO with a history of pancreatic cancer can expect to go through large gyrations every time said CEO gets the sniffles. Them's the breaks.

If on the other hand it means, "a company should be required to file a succession plan that names names with the SEC," then I would disagree strongly. Like product release plans, succession plans are forward-looking, subject to large uncertainties, and filled with proprietary information. They are nothing like a quarterly or annual financial statement which is an objective (or at least auditable) accounting of the recent past. Companies also choose to maintain various levels of confidentiality internally around these plans, for reasons their management teams regard as extremely important.

While I emphatically do not mean to point a finger at Jason, it should also not go without saying that there is a disclosure lobby out there whose motives are primarily selfish. New mandates create "forced buy" situations for companies subject to rules which are rarely easy to understand, and offer windfalls for vendors that are only too happy to provide answers. It is one thing for firms to provide such assistance, and another for them to lobby for rules which effectively require companies to buy from them.

At the other end of the scale, they also create new opportunities for specious scrutiny that effectively criminalizes the ordinary uncertainty of business. For instance, if a company discloses that the CEO candidates are persons X or Y, they choose X, and Y leaves to start a hugely successful new venture while X leads the company down the drain, have the shareholders in some way been defrauded? And does publicly stating that X and Y are the presumptive candidates create liabilities should the board in its wisdom decide to select someone else at the last minute?

None of this means companies cannot, or should not, disclose as much of their succession planning process as they feel is in their best interests. Berkshire Hathaway's stock price, for instance, does not seem to reflect concerns about the advanced age of its equally-iconic CEO Warren Buffett. Apple's shares have for their part gone through many wilder fluctuations than this one over the years, and with a beta of 2.59 (meaning it is very volatile compared to the market at large) no one invests in Apple because it's good for their blood pressure. Apple's management has chosen to pursue a high-beta strategy across the board, and investors are entitled to decide whether they wish to be along for the ride.

Comment by Colin Kingsbury on July 29, 2008 at 2:15pm
Maren, thank you! Succession planning definitely has a huge impact on retention, especially where there is a strong ladder-climbing component. Succession isn't just about CEOs retiring either, it's also what happens when an entry-level manager gets promoted and how the company goes about replacing her. Companies that have a strong promote-from-within culture (UPS and Enterprise Rental Car come to mind) do see increased retention. However, I would add that overall performance is the measure and not just retention.

As to how this applies to private companies, there it is a matter of internal communication to employees. The whole rationale for public disclosure is that shareholders in publicly-held companies have certain rights to understand how the company is operated. Private companies are generally subject to only minimal disclosure rules as it is assumed their owners are either wealthy enough to make informed decisions (the so-called "qualified investor" rule) or they are owned entirely by management and as such have the right to manage their company as they wish.