I had the privilege last week to attend the launch of the San Francisco Summer Jobs+ and see Democratic Leader Nancy Pelosi and Mayor Edwin Lee speak about the importance of the initiative.  This is a city based program that mirrors the National White House and DOL Summer Jobs+.  It was really inspiring to be in a room with government, non-profit, business and industry leaders coming together to combat youth unemployment.  The United Way of San Francisco had a significant presence and made clear the positive impact the program will have on the cities youth.

According to the press release on the DOL site:

"As the nation continues to recover from the deepest recession since the Great Depression, American youth are struggling to get the work experience they need for jobs of the future. According to the Department of Labor's Bureau of Labor Statistics:

At City Hall in San Francisco in an "Oprahesque" live call for commitments of jobs to the program - employers stood up and committed positions that they will post in the HireSFYouth.org site.  There were also young people present that will benefit from the program that the "suits" in the room were committing their resources.  The recipients of the program watched and cheered as each company committed more summer internships - you could see faces light up of at the prospect of having a summer job or paid internship with some of the top named companies like Starbucks, Jamba Juice, UPS, Twitter and Zynga.  There were also smaller companies represented that were only able to commit to one or two positions, but it was clear every little bit will help.

I challenge you my friends in the Human Resources and recruiting space to be one of the "hands on deck" and either create and post OR post your existing summer jobs and paid internships with the Summer Jobs+ Programs Nationally or if you are in the Bay area in San Francisco.  It's FREE and you can feel good about yourself!!

AfterCollege was invited by the White House to deliver the national Summer Jobs+ program and  has volunteered to power the technology driving the San Francisco Summer Jobs+ program.  Their CEO, Roberto Angulo stated "AfterCollege is also willing and excited to replicate this initiative to other major cities around the country that are interested." 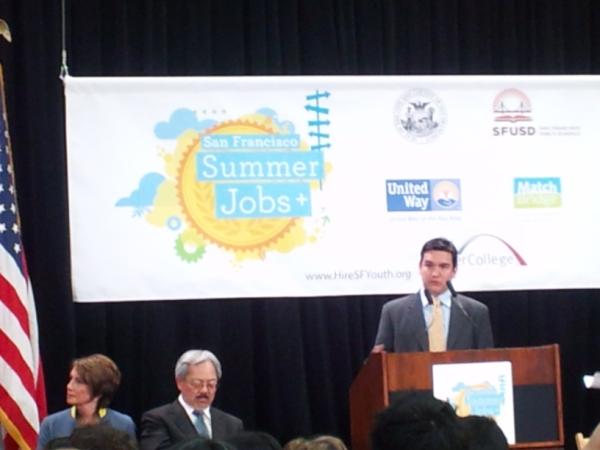