Are You Stranded in the Desert?

Desolate and lonely, you find yourself in a vast space where it seems no one, absolutely no one, can be found. Parched and hungry you trudge on, getting wearier by the moment. You just want to give up, thinking, “this is it. This is where it all ends.” 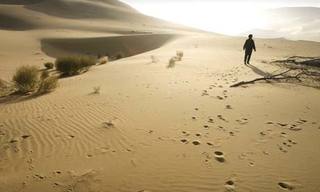 No, this is not a vain attempt at channeling Stephen King or Dean Koontz. Rather, the “desert” described above is the mental space that salespeople find themselves in at points in their career. Selling, at times, is incredibly lonely, especially when things don’t seem to be going well. There are lean times, or lolls, in every salesperson’s past and future, and for some of you reading this, maybe even the present. It’s common to think, when this occurs, that this is it, the end of whatever run of good fortune you had experienced. You are hungry, for that next deal, and certainly parched if you’ve been making a lot of calls or having lots of meetings that seem to be going nowhere.

Wouldn’t it be a shame if you were in a real desert and you gave up just before cresting the next hill, as there is a town there, full of people waiting with food, drink, and shelter. The same is true in selling; there are people who are going to buy, if you just keep showing up.

I’ve been in these lolls, and since I still sell my consulting, coaching, and speaking services, I’ll, most likely, be in one again. Yet, I never give up. In fact, my mantra, during these lean times comes from James Taylor’s Never Die Young:

“Never give up, never slow down,
Never grow old, never ever die young.”

The moment we give up, even if for an instant, is when we miss that next opportunity that’s right around the corner. If we slow down, we lose the momentum that allows us to build and sustain a healthy book of business. We grow old and weary when we stop doing the things that work, even though they don’t seem to be working in the moment. Successes are not sustained and end early, dying young, when we don’t evolve with the times, learning new skills and constantly sharpening and improving our abilities.

Often, deserts are of our own making. And when they are not, we make them worse when we don’t do what works.

Deserts always dissolve away, sometimes quickly, sometimes slowly. So, keep trudging the road to happy destiny, no matter, no matter what!