Recently I had the opportunity of attending a Talent Net Live event hosted by JCPenney in Dallas, Texas.  For those who don’t know, Talent Net is a social recruiting forum featuring big names in recruiting and social media covering the hottest tips and topics of the day for job seekers, social media enthusiasts and talent professionals.  While I attended the event to learn more about up and coming social media tools and their application in the recruiting industry, my biggest take away came from the Keynote address delivered by Michael Long and part of his Culture and Communication Team.

Michael Long is the Head of Culture Branding at Rackspace Hosting, and yes, his department is really called the Culture and Communication Team.  Michael and his team were on hand to give us an inside look at how Rackspace is building their culture brand from the ground level.

Michael, also known to many as @theredrecruiter, shared an interesting analogy that really hit home with me: bird watching. Michael has a serious disdain for the overused buzzwords “employment branding” and considers what he and his team are charged with as “culture branding.”  Sounds like a simple play on words and not much difference, right?  So what’s the big deal, and where’s the connection to bird watching? 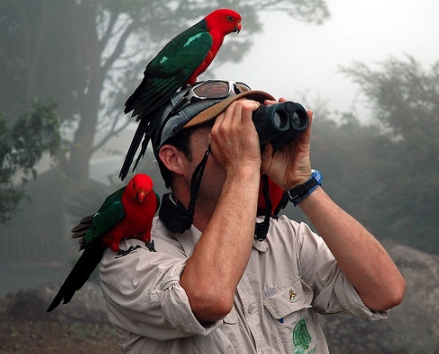 Bird watching, as Michael put it, is simply going out into the woods and faking like you are a bird in order to see, chirp, and/or interact with a bird.  Employment Branding is similar: fake and dis-ingenuous. The Culture and Communication team isn’t in charge of developing and imposing a culture at Rackspace, they are PART of it.  They are Rackers.  They are the bird.  Culture Branding is being the bird, documenting  the life of the bird, and sharing it as appropriate.  This my friends just might be the next great hash tag if you are looking to get one kicking #BeTheBird!!

The crazy thing about Being the Bird is that is seemed like a lot of people didn’t get it.  I got the feeling they were looking at this idea in a very shortsighted nature, as in, “be the bird like they do at Rackspace.” Michael wasn’t suggesting we make the same kinds of videos or share same stories, he was suggesting that every company has their story, culture, and reality to document and share.  In essence, birds of a feather flock together.  An accountant might HATE the culture at Rackspace, and that’s OK.   A Racker might, and probably would, HATE the culture at Deloitte, and that’s OK too.  The point was that each company should embrace what makes it special, document it, and share it.  What better way to build the culture of an organization than to embrace the culture that is already there, and let it grow organically.

The bottom line; there are over 10,000 species of birds in world.  All of them look, act and sound different. Don’t try to make your company look like something it isn’t, and don’t try to make your brand like some other company. Embrace who you are, document it and share it with the world.  Just Be The Bird.

Here are some of my cryptic notes from the Keynote: