Beauty and Value and Potential ...are in the Eye of the Beholder - BEHOLD a Photograph that Sold at Christie's for $4.3 MILLION! 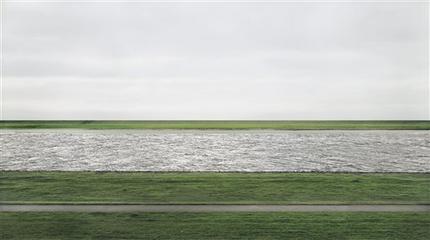 The highest paid and highest priced photographer alive is Andreas Gursky.  He's considered by some critics as the tip-top best for the kind of photos he takes, e.g., "his handsome images of trading floors, hotel lobbies, raves, and landscapes were charged with a visual force and intellectual rigor that let you imagine that you were gleaning the grand schemes and invisible rhythms of commerce and consumption. His amazing picture of a convenience store brimming with goods, 99 Cent II, Diptych (2001), which recently became the most expensive photo in history when it was auctioned for over $3.3 million, fizzed like cherry cola but packed the formal power of a Monet."

The picture above sold this week at Christie’s for $4.3million.  It is the highest amount ever paid for a photograph.  Someone obviously considered this photo such a work of art that it was worth that amount of money.  Others wouldn’t buy a $5.00 poster of this photo—thus underscoring the old adage—beauty is in the eye of the beholder.

We recruiters experience the same conundrum when we recommend a candidate we feel is a great match for a job and an employer’s culture only to see him or her dismissed out of hand as not a good fit. It’s particularly painful when the HR recruiter, not the hiring manager, does the dismissing.  I think most of us have been there or will soon have that experience at the hands of someone who didn’t recognize the beauty of the fit, value and potential we saw in a candidate.

That experience is escalated when an offer is being positioned against our best advice.  I’ve had the experience of having an employer’s HR recruiter (my interface was limited to the rep and not the hiring manager) ignored my best advice that their proposed job offer package was so out-of-whack with what it would take to land a highly accomplished, high potential minority candidate who happens to be gainfully employed.  They extended the DOA offer package and it actually insulted the candidate.  What makes it worse is the employer’s HR recruiter was miffed that the candidate rejected the offer with an air of, “What’s wrong with this candidate?”  That experience, for me, qualifies as Dumb and Dumber can happen in the selection process.