He wrote a blog posting in which he declared: "We all know that diversity helps make everything better."

He hadn't thought the issue through and all he could say was, "The teams I've worked on have always been better when they were diverse. I don't want to work on a team full of me."

But, in fact, he also said that people are naturally attracted to people like themselves. That's why every minority needs affirmative action.

Because most of the hiring managers are going to be from the majority population and they are naturally going to favour people like themselves. Inotherwords, everyone in the world is, by nature, averse to diversity.

So, if people like people like themselves, how can teams be better when they are diverse? Chris didn't tell us that either. He wants to come back on the show. And maybe he'll have answers then.

When Ed Newman was a guest, he said that the sole purpose of diversity programs is the prevention of standard bias in hiring. But they don't promote innovation through the hiring of diverse thinkers.

I had some problems logging into my show yesterday so there might be a delay on the recording before the show begins. Also, sorry, but Chris called on a lousy phone. 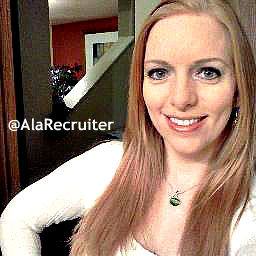 I should note that I also had award-winning guest, Amy Ala back for her third appearance on the show. I asked Amy to come on to counsel me about dealing with job hunters who approach recruiters for help at funerals and other social occasions.

After 10 or 15 minutes I thought we had covered the problem and I ended the show -- much to Amy's chagrin. She said she had a lot more to say. But I didn't know. You see, I've started scheduling two guests for each show and I've been trying to focus each guest on one issue.

I intended to discuss only one issue with Chris, too. But I had read many of his blog postings so when we finished one topic with lots of time left in his segment I just moved on to another. In fact, I should have kept him on longer than I did.

I hadn't reviewed any other issues for Amy so I wasn't ready for more discussion after a quick resolution of the intended topic.

So, I need to schedule three guests in the future or plan to discuss multiple topics with each of two. Sorry, Amy.  But give me a break: you're back very soon.

thanks Animal, it was fun as usual. :) See you in a month.

You know what it's going to say on my epitaph? Recruiting Animal was the humblest of men.

I think the epitaph should be.

I TOLD YOU I WAS SICCCCCCCKKKKKKKKK!

Dear Amy, you had run out of interesting things to say. Okay?

And I didn't prepare any other topics 4U.

I ran out of interesting things to say? HA! Take a poll of your listeners and see if you can find even one that would agree with you.  :)

We could revisit the diversity topic. I think my kid made an interesting rebuttal to Chris' viewpoint.

He wants to come back at the end of May and prove himself. We can take it up with him then.

PS: How do I poll my listeners?

If UR a guest on the Recruiting Animal Show it's good to check the show literature B4U come on.

That's true even if you are a return guest because you know sometimes things change.

I had a lot of bad shows last year so I tried to upgrade my performance by having a new policy of two guests per show so that one wouldn't bear the burden of creating a full hour of interesting conversation. You can read about it here.

I say very clearly in my announcement that I will invite people on for one issue interviews.

So, if you come on for a one topic interview please don't cry afterward that U were not on for a half an hour. Because, after all, I invited you on to discuss that one issue and that's probably all I prepared for.

However, in the future I should prepare a number of topics for the one topic guest just in case, when the one topic is done, she still feels like talking.