Do We Really Need to Be Afraid of Artificial Intelligence? 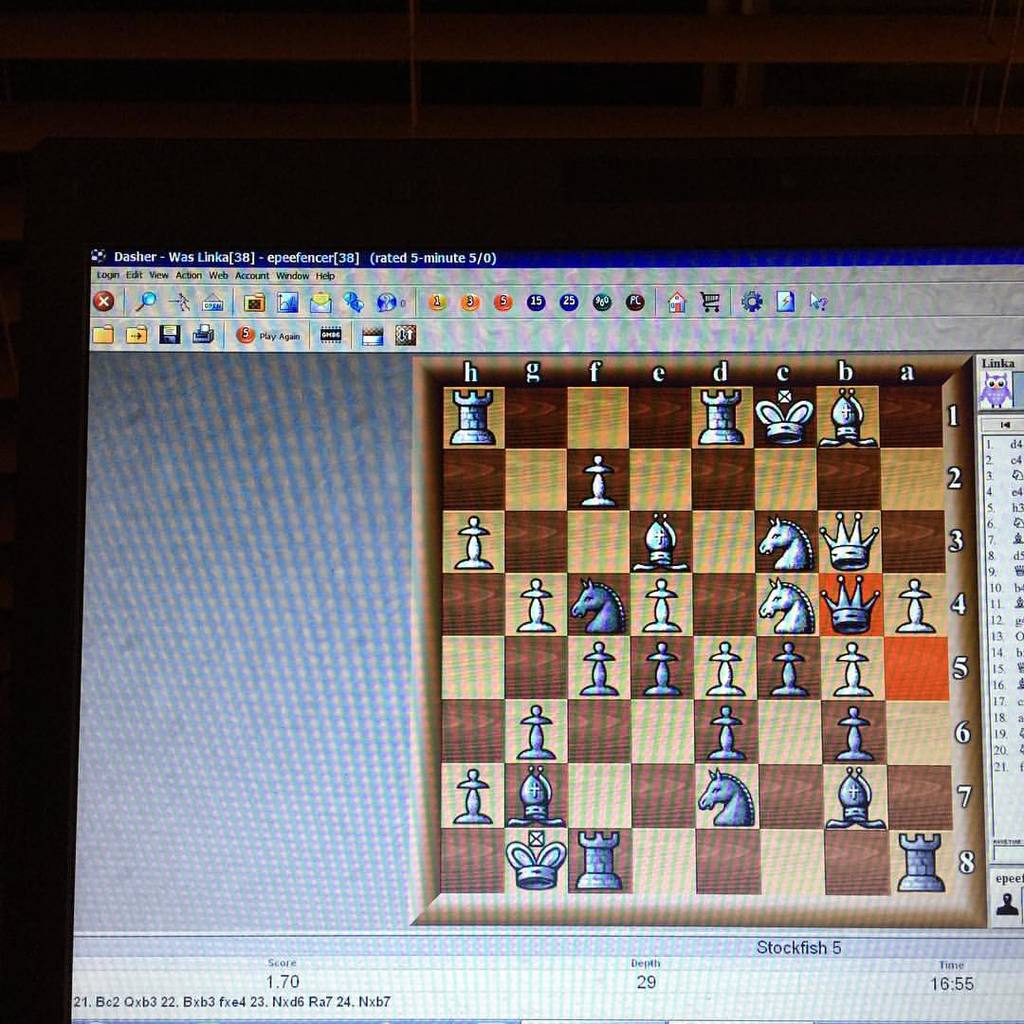 Stephen Hawking and Elon Musk both think that Robots and Artificial Intelligences might eventually try to take over the world and destroy life as we know it, in a "Terminator" kind of doomsday scenario.

I think people like Stephen Hawking and Elon Musk are frightfully clever people, but I would like to point out where humans retain an advantage over Artificial Intelligence, even at a sport or game where computers can clearly outplay all human competition: chess.   Ever since Kasparov lost a game to Deep Blue, this has been a known fact.  All the same, I say that in irrationality (and intuition) is Humanity's salvation... because computers will never be able to think like the crazy, mad people that live on this planet.

In this example from one of my recent games on Internet Chess Club  (http://www.chessclub.com), I played this King's Indian Defence.  I find it interesting that the computer has analyzed this position to 29 half-moves depth (according to it), and it wants me to capture (recommends that I capture) White's knight at c3. After White plays the forced recapture Qxb3, Black has a beautiful fork with Ne2+ (forking King and Queen)... definitely a beautiful move choice and Black is evaluated at 0.93 pawns ahead....

However, I totally disregarded that possibility (never even thought of it), and I automatically moved Qb4 after thinking 14 seconds. The Stockfish 5 computer program immediately evaluates this as a better move (1.46 -- more than 0.5 pawns).... thinking for about 8 minutes, Stockfish 5 moved its evaluation of my move up to 1.58. So, it clearly agrees that I made a superior move to what it is able to calculate.

After only 35 minutes of calculation, Stockfish 5 evaluates my move choice at 1.84 (nearly 2x the value of the move it had calculated on its own after about 8 minutes)...  Based on the rules of Elo rating calculations, this would yield me a "Performance Rating" of 3683 (on that move! not necessarily anywhere else).... and because speed chess generally reduces player ratings by as much as 600 points (I have played many FIDE rated Masters with ratings of under 1700 at speed [5 minute] chess), that could actually yield me a "performance rating" of 4283, which is pretty high.

Yeah, OK. I got lucky! No human has ever achieved a rating above 2900, but the theoretical maximum for a "performance rating" earned by playing against a human would be 3300...

What's interesting about this is the fact that Stockfish 5 has a rating of 3284 (which is 400 points above any human rating ever achieved -- meaning that the probability of Stockfish 5 beating any world champion is about 80%)....

Doubling the calculation time, after 73 minutes of calculation, Stockfish 5 still thinks 20...Qxc3+ is the best move, even after I showed it conclusively that 20 ... Qb4 is superior.... which it recognizes immediately. This is a calculation to 36-ply, meaning 18 moves by each side... a calculation involving 3.7 billion nodes (which are distinct variations evaluated by the computer)... It took me 14 seconds to come up with a better move, without even calculating and just playing the first thing that popped into my head.

The intuitive human mind can still calculate faster than 200 million positions per second, based on that fact.

The computer has calculated 3.7 billion variations, each to a maximum depth of 36 half-moves... simple multiplication should give us a rough estimate at the minimum number of positions calculated as at least 133 billion positions calculated in 73 minutes.... this comes out to 30 million positions per second, which is less than one magnitude of order off from the original estimate of 200 million positions per second, so it must be 'fairly accurate'. I let it run another hour or two and it examined 10 billion variations (nodes), but still couldn't come up with the better move 20...Qb4!

Realistically, if the computer can't come up with the better move in 2 hours, it can't really be thinking creatively like a human can... that much is obvious.  So, in a day and age where we need to worry about Terminators and AI Robots coming to get us, I just suggest that is nice to know that Human Intelligence can still outperform computer programs that calculate over 200 million positions per second, and which could easily defeat the world-champion, Carlos Magnussen (or whatever his name is).

Not to belabor the obvious, but if a computer can't perform better than this, how will they ever replace humans as recruiters?  The computer SEARCHED through 100+ billion positions (i.e. "candidates") but couldn't evaluate them correctly, so it failed in its mission... and proved the unreliability of computers being trusted to do a human's job.