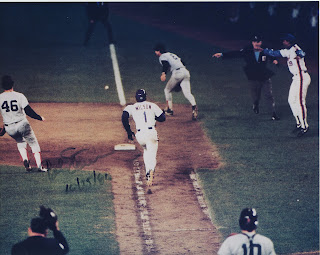 Are you Bill Buckner?
Ok…I admit it. I am a huge baseball guy. You may even call me a baseball geek. It’s early February and I’m already wondering how close we are to having pitchers and catchers report to MLB training camp. (Seven days or so in case you are wondering).
This time of year, my mind always wanders in two distinct directions. First, what is my team going to do this year to shore up their pitching and power hitting deficiency? Second, I can’t help but go back to the best Fall Classic of my life – the 1986 World Series and famous/infamous (depending on your side of the ledger) “Buckner Ball”.
Let me just relive the moment for my own amusement. Late October, Game 6 of the World Series, Boston leads the best-of-seven series 3 games to 2, and has a two-run lead with two outs in the bottom of the tenth inning. New York has 3 straight singles to tie the game and then Mookie Wilson, of the Mets, steps up to the plate. After fouling off hundreds of pitches (or several anyway), Mookie hits a slow ground ball down the first base line towards Buckner (an All-Star first baseman). “Billy Buck” had quite literally fielded thousands of these ground balls through his career (though originally an outfielder). This was just another routine ground ball….field it, step on the bag, game over….Boston Red Sox break the “curse of the Bambino” and are World Champions.
Then it happened. The routine ground ball somehow goes right under the glove of Buckner and dribbles into right field – allowing Ray Knight to score the game winning run. Mets win!...then come back to win the Series in Game 7. Yes…I’m a huge Mets fan.
So what does any of this rambling have to do with Job Searching? Everything in fact. “What are you doing to find a job?” This is a question I ask people at least 5 to 10 times each day. The answers are surprising. Typically, the answer is, “Well, I check Monster.com and I’ve talked to a few recruiters.”
So how important is your job search? Is it really only important enough to check a few job boards and send an email to a recruiter or two? Well, most of the candidates I speak with are really just doing what they’ve done in the past. It’s not that they don’t care…it’s more that they are creatures of habit, and have done it this way…many times. So many times, in fact that the job search for many has just become a matter of routine. A routine that is so in-grained in many job seekers, that they just take their eyes off the ball and it trickles in to right field and costs them the game, the World Championship, and immortality (the good kind, not the “Buckner” kind).
Yes, times have changed and there is definitely more to finding the right career spot than checking a few job boards, talking to a few recruiters, or gasp……looking at the classified ads in the paper.
Do you know about the “Hidden Job Market”? Some professionals say that nearly 80% of openings are filled before they ever become public. If that is the case, then a true job search needs to be able to both identify and penetrate the “hidden job market”. If you are unable to access the hidden market, you risk competing for the 20% of advertised positions with all of the other job seekers.
If you are looking for a new opportunity, do you know:
• How jobs are created…and what sets the process in motion?
• What is the first step an employer generally takes to look for candidates?
• If the first step doesn’t work, what is the next step?
• Finally, when the job becomes public/posted, how do you get noticed?
More information to come. Stay tuned, and Go Mets! I hope we get some pitching this year.