Embarrassment To The Profession 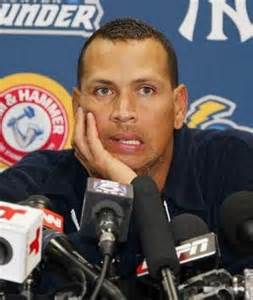 Yesterday was a sad day for the baseball profession. 13 major league professionals were handed suspensions for steroid use. I think a better use of words rather than sad, would be embarrassing.  This is not the first time we have seen this happen and it certainly won't be the last.  The names are astounding.  Alex Rodriguez, Nelson Cruz, Jhonny Peralta were the 3 biggest names.

Let's talk a little about Alex Rodriguez.  In 2000, Alex signed a $252 million 10 year contract with the Texas Rangers.  At the time, it was the biggest contract ever signed for any US based professional sport.  He was 25. After essentially bankrupting the Rangers in years to come, he went to go play for the New York Yankees in 2004 and has played there ever since.  In 2007 he had the opportunity to "opt out" of his contract with the Yankees and the Yankees signed him for another 10 years for $275 million which would have him playing until he was 42 with the Yankees.

He was loved by most of America.  He was idolized by children and players.  That was then, this is now.  It is 2013 and he is facing a 211 game suspension from MLB that will essentially end his playing career.  There are 162 games in a year and if it withstands appeals, it will be the largest suspension ever given to a major league player other than a complete ban from the profession.  This is truly a tragedy.

We have seen some of the "greats" go down in the history book as steroid users, but truthfully, I thought it was over.  Alex was supposed to be the good one.  Mark McGuire, Barry Bonds, Roger Clemens, Sammy Sossa.  That was the "steriod era" and the game was cleaned up.  I thought.

You see, we all want to be successful.  We all want to achieve greatness.  At what point is it worth compromising your integrity?  Alex was drafted out of high school.  He lived in New York, the Dominican Republic, and Miami.  When he was with the Seattle Mariners, he already achieved more than he ever thought imaginable.  Money, greed, power got to Alex.

What one person is worth over $500 million dollars?  No one.  Baseball is a team sport.  Alex made it all about him.  He lied, he has tampered with evidence surrounding the steroid accusations.  Baseball will not have it anymore.

I am a recruiter.  You may be a nurse, a police officer, an engineer, or maybe a school teacher.  We are challenged everyday with making decisions.  There is a fork in the road and we can do what is right or honorable, or take an alternative path.

What is your decision?   In the end, who is Mark McGuire?  Who is Barry Bonds?  Who is Alex Rodriguez?  Truth is no one cares any more.

I was asked in an interview one day: "In four words describe who you are".  I answered: "Relating to work"?   The answer was "No".  I responded:  "Faith, Family, Integrity, and Trustworthiness".  What are your 4 words? How do you want to be remembered?

If you liked this article, please follow me on twitter at @WThomsonJr, connect with me on Linkedin and subscribe to my blog site by clicking the link below.