On the occasion of a wonderful long weekend dedicated to family, food, and fun it’s imperative to remember what this holiday celebrates. Over the course of generations, Americans have sacrificed their youth, their bodies, and all too often their lives to protect our nation and its citizens. To pay homage to these incredible sacrifices is the very least each of us can offer, but it is even better to try to repay these brave patriots with something more tangible. For those of us involved in Recruiting and Staffing there are multiple avenues in which to make a difference.

There are obvious benefits to hiring veterans. Many come out of service having been involved in highly technical arenas, bringing with them exceptional skills and training. Veterans will typically excel in the areas of discipline, teamwork, reliability, commitment – areas that are integral to a successful military career and which directly impact any professional organization.

Unfortunately, some designations in the military do not translate as easily into the civilian sector. Military Transition offices do much to help ease veterans into civilian life, but all too often veterans are ill-prepared for the realities of employment in the commercial arena. They may need help translating their skills for their new environment, deciding on which training and education might have the greatest benefit, dealing with employers and recruiters, even writing an effective resume.

So while we’re enjoying a long weekend and paying respect to those who serve and have served, let’s find a way to do something tangible: post jobs on veteran-oriented sites, volunteer services to help educate transitioning military personnel on resume writing or job searching - anything that can help bolster their ability to find vital, rewarding work after the military. There are myriad groups doing exceptional work in these areas, but here are a few worth contacting:

There is no shortage of other organizations to work through in order to help. Any effort, no matter how small, can have a mighty impact. I hope we can all take a few minutes to leverage our skills, experience, and available opportunities to help those who have done so much to ensure out liberty.

BRAVO!  Doug--well said.  For those who pay and paid the price by serving in the military deserve a fair shake in the pursuit of happiness.

As a proud veteran coming from an extended family of very proud veterans--I salute your call to action on behalf of: "Helping Our Veterans" relative to employment consideration.

A heartfelt thank you! 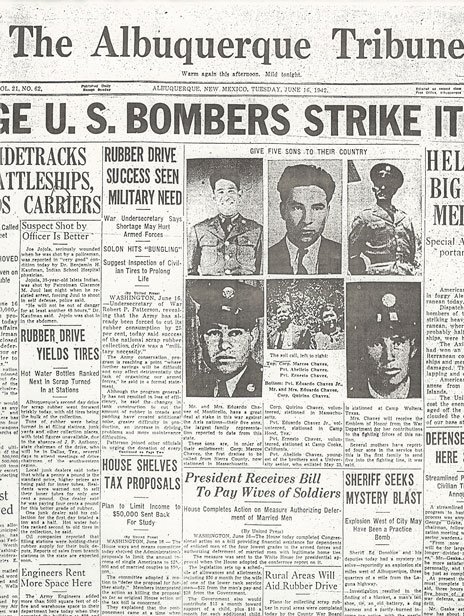 On June 16, 1942 the New Mexico Albuquerque Journal had a front page article with photos entitled "GIVE FIVE SONS TO THEIR COUNTRY".  The photos are those of my grandparents, on my mother's side, and their five sons (my uncles-THE CHAVEZ BROTHERS) in military uniform, all in the service (Marines & Army) at the time--all fighting in airplanes, tanks and in the infantry in WWII.

My uncles went into the service when the U.S. entered the War in 1941.  Except for one uncle who died in Italy, four of my uncles did return home.  Three of them were still living when I and three of my brothers entered the Marines and the Army during the Vietnam War.  My two eldest brothers went to the Marines; a younger brother and I entered the Army (my younger brother retired from the National Guard).  My father was also a proud veteran—a 100% disabled Army veteran from the Korean War related experience.  On the younger side of my extended family are four additional veterans Marines, USAF and Army soldiers--my nephews (one with a wife who served in the USAF).

I share this here of all places because I actually owe my Army experience to getting into recruitment in the first place.  As fate would have it, I entered the Army in 1971 with clear knowledge that I was Vietnam bound.  Boot Camp was at Fort Polk, La--the jump off point to go, non-stop, to the war zone.  The graduating class just ahead of my class all went straight to Vietnam after Advanced Infantry Training.

Then something unexpected happened.  My graduating class were dispersed everywhere but Vietnam.  Some went to Korea, Germany and to bases stateside.  I went straight to Washington D.C. for assignment to the Presidential Traveling Team (that part of the team that arrives ahead of the president to secure places he was scheduled to appear).

My recent college degree, high test scores and performance evaluations rated me tops to go to one of the plum assignments in the military--but I turned it down.  I had just been married during Christmas leave and noted that the Traveling Team would be traveling 100% of the time.  As a newly married soldier I asked for reassignment and got it.  I interviewed with the Deputy Director of the Officer Personnel Directorate (OPD) at the Pentagon.  He, a full-bird Colonel, reporting to the Brigadier General for OPD, commented after our interview, "Any goddamn private can do any goddamn GS 13's job (his GS-13 Action Officer was retiring) and he placed me on an Action Officer's desk with responsibilities for Civilian staffing (recruitment, transfers, promotions, and terminations) for the fourteen DA level branches of the Army, e.g, the Adjutant General, Finance, Infantry, Quartermaster, Aviation, Air Defense, Military Intelligence, Signal, Logistics, etc., along with the Army Suggestion Program and Special Projects.  So, I've been involved with recruitment, inclusive of veterans, since then--39 years now and going strong.