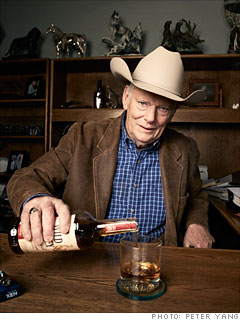 Traveling on Southwest Airlines has the potential to be a pretty miserable experience.

There are no assigned seats and no first class, so it is always a bum rush to get A or B seating. The in-flight meal consists of “various forms of sodium,” as one quick-witted flight attendant once told me. Compared to other airlines, there are less TVs, leg room and the décor is, well, either overly brown or overly blue.

And yet, it isn’t. Why? Because generally, the safety instructions that start every flight go something like this:

Just about all of the dozen or so Southwest flights I’ve been on in my life have had flight attendants providing a hilarious break from an otherwise monotonous day of traveling. And this was no coincidence – the airline’s overall hiring strategy is to get genuinely funny people who can make an airline that is cheap, but still a nice experience.

And it is working, in a big way.

Starts At The Top

Southwest Airlines was conceived by Herbert “Herb” Kelleher, a chain smoking, whiskey drinking wise cracker, on a cocktail napkin in the 1960s and began in 1971, despite legal challenges to stop it. Kelleher, who is known for his flamboyant personality, stressed since the beginning that his employees should take their work seriously, but not themselves.

Kelleher primarily sought to compete against other airlines on price, as his strategy was to offer among the cheapest fares on the market. However, while he couldn’t match other airlines on certain amenities, he figured he could make it up by having funny, outgoing workers.

"We look for attitudes,” Kelleher said about his hiring process, according to workforce. “We'll train you on whatever you need to do, but the one thing we can't do is change inherent attitudes in people."

To be fair, Southwest has two distinct advantages that some other companies don’t: they get a ton of applicants (although that might be a result of their great employer brand) and the FAA mandates they train all their flight attendants, so no experience is required.

That allows them to build a massive applicant pool – 10,000 people applied for 750 flight attendant positions in 2013 – because a lot of people want to work there and the only requirements is that applicants have to be 20-years-old and possess a high school diploma. So the real magic of their hiring approach is the screening, not the recruiting.

As Kelleher stated, that approach is all about finding funny, outgoing people. Generally, the first interview is a group interview, so screeners can see how candidates interact with each other.

For example, in one group interview witnessed by Fast Company, candidates were asked to read aloud a “Coat of Arms,” where they finished statements like “One time my sense of humor helped me was…” and “My personal motto is..”. In that interview, a man who said his personal motto was “I am the master of every situation” – a line that drew laughs – moved on to the next round.

From there, there is a one-on-one interview, where again the focus is on cultural fit and attitude. Southwest Airlines has created a profile of the type of people they are looking for, and through behavioral interview questions, they actively seek that type of person.

Again, all flight attendants have to go through a four-week training program paid for by Southwest, as mandated by the FAA. A big part of this training is handling emergency situations and learning some basic First Aid, but there is plenty of time for fun as well, like balancing eggs on straws and scavenger hunts.

The lesson is reinforced: take the work seriously, not yourself.

This is all managed by Southwest’s famed People Department. Kelleher hated the term “human resources,” arguing that humans aren’t resources like oil or iron, and just called his HR team the “People” department instead.

Once aspiring flight attendants graduate, they make a solid if not spectacular $24.39 an hour and have to work a minimum of 66 hours a month. They do get other benefits as well, including a flexible schedule and free standby airfare.

Paying Off – In A Big Way

So how is all this doing? Since Southwest started in 1971, it has been a trailblazer in air travel, with its low prices forcing fares down across the industry. The company now brings in $17.7 billion annually - $754 million net – and is nation’s largest carrier in terms of originating domestic passengers boarded.

On top of it all, in its forty-plus year history, Southwest has had just one onboard fatality.

Why so much success? Kelleher’s new ways to reduce fares obviously played a big part. But, according to Bloomberg, their exemplary, offbeat customer experience ensures that people keep coming back.

There are so many hiring lessons companies can take away from Southwest it is almost hard to know where to begin. They are a great example of the value of a great onboarding process, to hire for attitude instead of skill and of having a great understanding of who you are, just to name a few.

But this is perhaps the biggest: that cheap doesn’t have to mean bad. Southwest is the cheapest or one of the cheapest airlines. And yet, it isn’t a bad experience because they hire great people and put the effort in to keep them engaged.

And that’s a powerful lesson for any company: price matters, no doubt. But so do people, first and foremost.