The wonderful people at RBC were very welcoming, and even the mean comments were worth something. I made some great online friends and worked with AMAZING people like Sandra McCartt to drive even more conversations around all things recruiting. When The Angry Young Job Seeker went live, I got into my first twitter war. I hung my head, shuffled down to Ecommerce and asked if I was in trouble for having my employer’s name invoked by a guy calling me an ageist. They read the post and laughed for about 20 minutes, congratulating me on becoming a “real blogger”.

Somewhere along the way, RBC suggested to Animal that I might make a good guest. We exchanged a few emails, I listened to a couple of podcasts, and figured this was no scarier than family dinners with my crazy Italian in-laws. I’ve handled them gracefully for years. This should be a piece of cake.

Animal made me get permission from my boss and treated the whole process very professionally. I think he waited until we were about 2 minutes into the show before he yelled at me. To be honest I don’t even remember everything we talked about. I know he brought up several posts I had written, and made me defend my stance on things (some we disagreed on). At the end of the hour I hung up knowing the after show was going to grade me and there were probably twitter mentions flying. I had NO IDEA what to expect. Had I blown it? Embarrassed myself or my employer? Was I now the laughingstock of the recruiting community?

I walked back into my office to a standing ovation. My colleagues had listened to the show live and thought it was GREAT. The twitter mentions were fabulous. People were entertained. And I scored about a gazillion points during the after show. I was WINNING. More importantly, I had FUN. 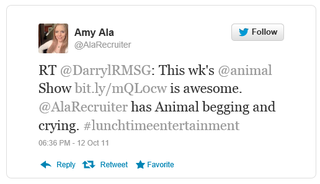 Believe me, there have been PLENTY of more interesting/exciting/successful guests than me. I’m humbled to be in the same club as some of these people. Even better are the friendships I’ve made as a result. Too many to list here, and I don’t want to risk missing anyone. You know who you are.

So has being a guest on the Recruiting Animal Show destroyed my brand? If my “brand” is my over-inflated sense of self-importance, the bubble I put myself in so I don’t get in trouble for saying what I think, my fear of offending someone even though I’m right, then yes. My guest appearances on the show napalmed it.

Hey, Animal will be the first one to tell you this show isn’t for everyone. It SHOULDN’T be for everyone. Only for the ones who are in the trenches keeping it real. The career coaches, recruiters, resume writers, even the job seekers that are actually involved in real recruiting. Not stuffed shirts hiding behind a “brand” thinking they can tell everyone else how do their jobs.

Animal can destroy my brand any time.

Well put Amy.  Now, were are the ex-trolls hiding?

Well said Amy, maybe now Animal will comment here too.  Sorry to have missed this weeks call. Sounds like it was interesting.

Thanks Alan. Animal prefers when I criticize him but I know he appreciated the post :)