few RT’s sprinkled in, several hundred #’s here, and……BAM!!! You’re a Tweetin’ machine! The first time I set up my first Twitter account, @MikeChuidian, I really didn’t know what to expect, nor did I completely understand it. I mean who understands this….?!?! 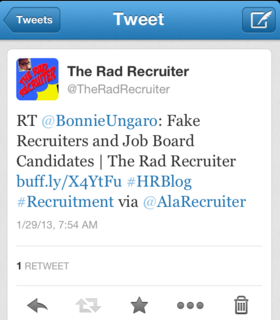 Huh?!?! Yup, those not familiar with Twitter and its landscape can and will be utterly perplexed. I know I was. But I did what any other forward thinking individual would do…. I Googled it! Novel idea, I know. I Googled what hashtags were, the meaning of RT’s and @’s, and those funky random characters that don’t make bit of sense!

I started following some famous peeps I had interest in and then started following people in my industry. At first, I just started to observe my twitter timeline and tweeted a little bit, engaging here and there, but nothing to generate a steady following. But getting that first follower is pretty awesome. I mean, who wants to follow a regular Joe like myself, right?! For a year I had my account and I had a little under 120 followers and was following about 100, most of them people I knew personally.

By this time, I knew how powerful Twitter could be and how it could help build my personal brand. I decided to step my Twitter game up, but how was I going to do that? I only had 120 or so followers. Being that I love all aspects of Recruiting/Staffing/HR and Social Media, I decided to start following the relevant industry influencers, thought leaders and fellow recruiters alike.

So my Twitter score at that time… Followers- 122….Following- 500+. As I started getting a hang of how Twitter worked, I decided to put the pedal to the metal and began engaging with those influencers, thought leaders and recruiters more than ever. The result was a steady rise in my followers accompanied by me following more relevant tweeps along the way.

I frequented the chats on Twitter, as I do to this day. Particularly #Jobhuntchat, which I co-moderate on a monthly basis and the likes of #peoplechat, #Tchat, #nextchat, #Internpro, etc. Not only was this the vehicle within Twitter that helped build my brand, but I was becoming someone of influence. A small one, but an influence nonetheless. I saw my following increase and quickly. WHOA, wait a minute….ME? I guess so! I have a passion and love for what I do and I love sharing that with people.

The chats on Twitter allowed me to have a voice to share my vision and outlook on my industry. More importantly it has allowed me to help people out and give them valuable advice. I was floored the first time OOMF (One Of My Followers) whom I had little interaction with, reach out to me via Twitter and asked if I could give them advice on recruiting! My response…ABSO-freakin-lutely!! After this, I knew Twitter was going to do wonders not only for my personal brand, but my credibility in the industry as well! After 6 months of goin’ all in on Twitter, here are my current stats to date and growing daily…..Not Rockstar status, but it’s building…. 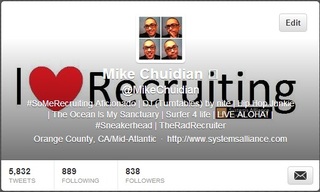 I’ve got a pretty rad brand going right now and it’s because of Twitter. More importantly I’ve got a rad brand because of the awesome friendships and professional relationships I’ve developed over a 6 month period. I’m no overnight sensation by any means and am proud to have grown my following organically. But let’s get one thing straight before you whisk into the Twittersphere…..Building your brand on Twitter is a lot of work. It takes a lot of motivation, purpose and thought to build your brand there. Use Twitter wisely and be conscious of the content you’re tweeting.

Here are the Top 5 Elements that built my brand on Twitter:

RT @MikeChuidian: Be rad & Tweet ur way 2 an awesome persnl brnd! #Branding #SoMe #Engage via @theradrecruiter at http://goo.gl/xGFZo

Jerry: Mike and Amy may not meet for business but it doesn't mean Mike wont leave with business.
It's the modern version of the "round of golf". If Mike can get an order from his efforts, maybe this approach has merit. And to be honest...Mike's approach is very common for his generation.

I dont know how it translate into fees. Everyone seems to be a bit mum on that.

Comment by Sandra McCartt on March 14, 2013 at 1:35pm
Correctamundo Jer. Ain't no bidness been done yet.

If we post a few more times Mike can achieve his goal of being the #1 trending post on RBC.

After all negative strokes are better than no strokes at all.

We used to have an expression in my part of Texas. When somebody went to work on a ranch, they "rode for the brand". Loyalty if you will. Now it's all "day work". :)

Thanks. My only advice would be...do it if it makes you happy but don't let it interfere with your work.
Nobles / Finkel would say "Stop playing with your wah-wah and get back on the phone."

Comment by Sandra McCartt on March 14, 2013 at 1:42pm
If thought leaders got paid for thinking and talking about it. All of us could quit recruiting and just think and talk. Oops, a bunch of them have. What do you suppose is the reason for that. Maybe more conferences than placements. I gotta go deliver something before I become a broke guru, thought leader or "branding expert".

Darren - while I do believe in personal connection, rounds of golf (always a good thing) and stopping in for a cup of coffee (which happens to be my signature move) - Mike will not be leaving his visit to Seattle with a req. from Microsoft.  I'd bet some money on it.  :)

Comment by Sandra McCartt on March 14, 2013 at 1:48pm
But Jerry, he can tweet that he hung out with a recruiter from Microsoft. That might give him some cred as a big ya ya. And maybe he can refer a good candidate to Amy, but will he get paid for it? Probably not.

2 thoughts - I'd rather hang out with / refer people to / work with a recruiter I know and trust. Mike (thanks in some small part to Twitter) is becoming one of those people. Jerry, Sandra, and a bunch of others are in the same group thanks to RBC. So maybe I'm less valuable because I haven't sent a check to anyone... but I still enjoy your friendships and would GLADLY recommend anyone to you guys if the opportunity presented itself.

You guys are an effing hoot! Lolololololzzzz!! Can we all hang out at one point in time?   All this talk about will he land this, will he get this business, etc? Relax, I'm doing just fine. BTW, I'm makin my money, takin care of my family, buyin sneakers and lovin life. If I were to leave this Twitter thing behind, I'd still be the same guy and I'd still be making placements. FACT!

one more thought - I'd damn sure rather hear about this stuff from practicing recruiters making placements like Mike than the so-called "thought leaders" who make a living conference hopping telling the rest of us how to do it.