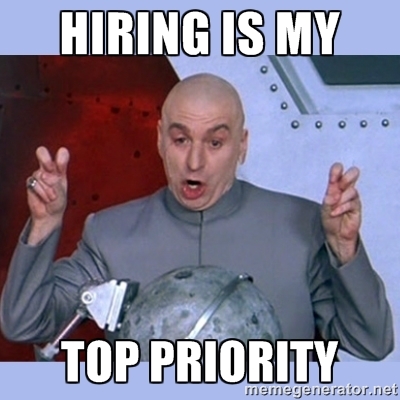 Yes… no…. depends? It is a question I most often ask of every manager or leader I meet for the first time, whether a prospective client, an existing client, or a new colleague. One simple answer speaks volumes about mindset and puts a stake in the ground indicating where the conversation, if there is to be one, needs to start and where it needs to lead. We are obviously required to assume that this applies only to people who hire people and it applies only in a professional context.

Yes is the answer to the question – the one you’re looking for. If you’re thinking no, we probably couldn’t work together unless you were open to change. That’s not meant to be snarky or snobby. It simply makes sense to me that hiring is, and should be, the most important management responsibility, regardless of whether that manager is currently hiring, or not. Certainly we could alter the question to something like “Is Hiring the Most Important Thing You Do, When You’re Doing It?” But, that dilutes the spirit and gravity of the question. It’s akin to asking “is oxygen the most important thing you breathe, while you’re breathing.”

The exceedingly unscientific poll results, from my having asked this question hundreds of times, lead me to my own conclusions. Managers who answer yes, undeniably, are generally more successful, more respected, are better managers, and consistently make better hires. They tend to partner with recruiters, are open to expert advisement on the process and best practices of hiring, and they engage throughout the entire process in the form of ownership, sense of urgency, relevant assessment, meaningful feedback and decision making. Those who answer “it depends” tend to act accordingly. In that case, other priorities often usurp hiring and, well… there you go. If the significance of hiring depends on what else is currently on a manager’s plate, that’s the same as a no answer in my view. So, in fact, the “it depends” response is not valid. It either is or it isn’t.

Oddly, It Is Part of the Culture Thing

We so often talk and write about corporate culture. I’ve railed against what most companies now relate as culture and cultural fit – mostly what it isn’t. It’s become the practice of cultivating individuals who fit neatly into a “they-look-like-us” container – frightening, actually. Moreover, it’s become a universal mechanism for censure of candidates someone thinks might not fit in. However, hiring being the top priority is one of those big ideas that does belong in the corporate culture discussion. Not only should managers treat hiring as the top priority, but it should permeate the organization and be a highly-touted component of the guiding principles for any company worth its salt. And, that should not only be reflected in the behavior of leadership but should be a metric against which all managers are measured. I’ve implored companies to move away from the normal bucket of quantitative recruiting metrics like time-to-hire, offer-as-compared-to-midpoint, requisition aging, and other measurements that have no significant bearing, nor shed any light, on the performance of acquiring top talent. I have seen a trend where organizations are warming to measurement of things more closely related to quality-of-hire, but these are often aimed at the recruiting or talent organization (aka HR in most companies) and not the business (managers). Why?

Put a Ruler on It

If hiring is the most important thing (and remember, it should be), then shouldn’t the people doing the hiring be measured? What I do see, in the rare case of a manager being graded on hiring, is where managers are measured on the quantitative aspect of putting a butt in an open seat. When annual performance rolls around, a small line item on the review form titled something generic, like hiring, is often rendered as “met requirements” – that is, if the manager had three open heads and managed to make three hires. If they only hired two out of the three and can throw talent acquisition far enough under the bus, they may still get the “at requirements” grade. And, we all know what rolls downhill. The fact that it took 120 days, on average, to make those hires ends up in the lap of some unknowing recruiter who pulled hair and teeth in an attempt to get the manager to engage in the process, but didn’t have the gravitas to stand up. And, we’re still talking about those idiotic and meaningless quantitative metrics. I know it seems we’ve steered off track – stay with me.

Be Careful of That For Which You Ask

To assume that hiring is the most important thing, most managers would say we have to project that assumption forward into things well outside of their own sphere of influence. The list is infinitely long – things like production outages, client issues, executive priorities, birthday parties, etc – and yet, I see this as a simple unwillingness to own a process so critical that it is literally make/break for the organization long-term. Why is this such a hard concept to appreciate? I believe it comes down to a single common denominator – because most companies haven’t elevated hiring to a top priority and because managers are not assessed or measured on it. Until hiring carries a sense of urgency as the top priority – not a burdensome task we just want to complete so it goes away – companies will continue to do what they do. And, the ripple effect is enormous, including things like:

This is an abbreviated list at best. Understand, I’m not advocating to make managers who are not engaged the bad guys here. The idea of hiring being a top priority is a shared responsibility among leadership, hiring management, and talent acquisition. It should be engrained in the fabric of the organization. When that happens, managers who don’t embrace the ideal don’t stick around. It’s impossible because the lack of engagement sticks out like a big nasty zit and the manager is either forced to raise the game or simply won’t survive. It becomes a universal expectation. Conversely, when a company doesn’t embrace this value, it’s ugly. Managers run amok, leadership looks the other way, HR and/or talent acquisition puts up a weak fight but usually has no voice or leverage in these types of organizations, and the company slips into a talent coma only to figure it out when it’s either too late or very expensive to right the ship. And remember, it shows up in the hiring process, and when a candidate has a great experience with your company, they will tell a handful of their closest friends. When they have a bad experience, they will shout it from the Glassdoor rooftop and tell everyone they know.

Start Small, Be a Hero

I hate to leave the site of a condemnation without offering some constructive suggestions. While it may sound like an all or nothing proposition (i.e., either hiring, as the top priority, is part of your company’s belief system or it isn’t) that’s not what I’m proposing – all is not lost. Sure, most companies who have not embraced this ideal do have a pervasive issue up and down the food chain, and most companies who make this principle a top-down imperative have success in large part and very few organizational dissenters. But in the former, change can begin small. One manager who partners with one recruiter can create magic in the midst of chaos. That manager can engage his or her team as part of the change, can partner with talent acquisition to leverage recruiting expertise and can remain open to advisement on hiring best practices – egos completely checked out. I’ve seen it happen and I’ve seen it propagate like the swine flu, in a good way. When well-intentioned people see others enjoying success, they usually gravitate towards the light. Adoption often starts small but grows through evidence and outcome. In fact, when I encounter companies who are clearly off the rails in this regard, I never make an attempt to start at the top. The bite is too big. Leaders often don’t want, or have no capacity, to admit there’s a flaw. The behavior is pervasive for whatever reason. So, winning one line manager, one director, one VP, one recruiter at a time is invaluable, if they are really willing to act as change agents and to be the change. I’ve never seen an employee, regardless of rank, punished for making hiring a top priority – never.

And the Answer Is

Is hiring the most important thing you do? The answer is yes. The question is rhetorical. If you believe otherwise, my hallucination is that your belief is reflected in ways of which you are not aware – in the morale of your team, in your own personal performance, and in your inability to make an impact outside of your immediate sphere of influence. If you do believe that hiring is the top priority, and you’re stuck in an organization who believes differently in whole, you have two viable options – find an organization whose values align or decide to be the change. All other options are untenable over the long haul.