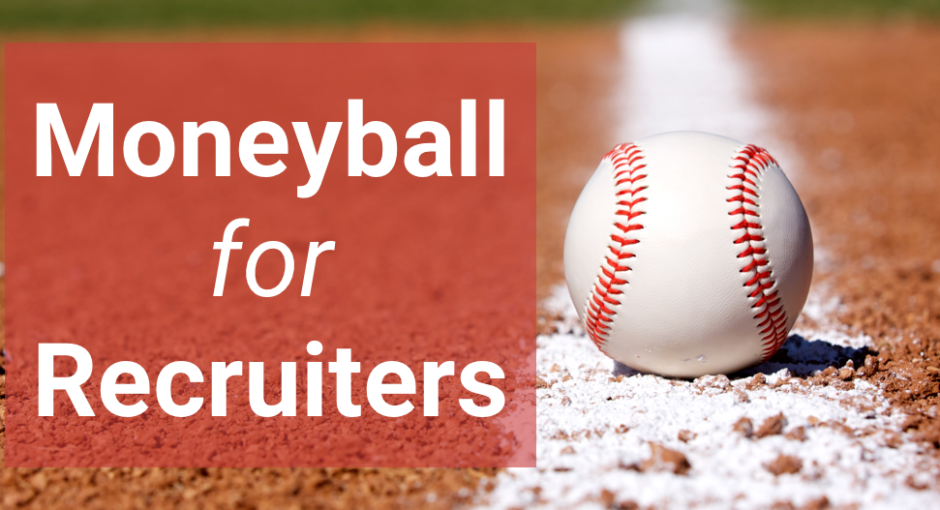 Even if you’re not a baseball person, you’ve probably heard of Moneyball. It’s a book (later adapted as a movie starring Brad Pitt) based on real events that rocked the baseball world. And your sports-obsessed friends love to talk about it. Why am I even bringing this up in an article for technical recruiters? Well, surprisingly it turns out that Moneyball has a lot of important lessons to teach us about sourcing and recruiting engineering talent! As a refresher for those of us who don’t eat/sleep/breathe baseball:

The manager of the Oakland A’s needed to change the way he recruited players so he could build a winning team on a tight budget. (Sound familiar?) Players were usually recruited based on a scout’s gut feeling about their skills, leading to costly missteps that the A’s couldn’t afford. So instead, he started recruiting players based solely on their performance metrics. He discovered undervalued, but skilled, players and built a team that actually won games. Other teams adopted this strategy, and today the “moneyball” approach has revolutionized how players are recruited and, in a lot of ways, how the game is played. All because one guy used data and statistics to build a better team!

This story has a lot of parallels with what’s happening in technical recruiting today. Before they started using statistics wisely, the A’s were hampered by three big things that will also feel familiar to recruiters:

The old way: For the A’s, scouting players was done a certain way that conventional wisdom accepted as the best way. Old-school technical recruiters also have preconceived notions about the best ways to recruit engineering talent. But these ways are based more in tradition than on what actually gets the best results.

The new way: The tech industry has changed a lot in the last decade. Reasons why include a shortage of qualified candidates, expanding hiring needs, and a more democratized educational system. Moneyball technical recruiters recognize that they need to adopt new practices to keep their company competitive. They use cutting-edge ideas and practices to find great candidates and assess their skills at different stages in the recruiting funnel.

Focusing on pedigree instead of skills

The old way: In baseball, a major focus was on player pedigree. Teams might try to recruit a player just because they’d played for a particular college or had previously been on a well-regarded team. Old-school technical recruiters often source candidates in a similar way, relying only on a limited pool of people to find candidates. (Think engineers who got a computer science degree at a top tier school, or who’ve worked at a big company in Silicon Valley).

The new way: Moneyball technical recruiters know that surface-level information about a candidate, like where they went to school and where they’ve worked before, doesn’t tell you very much about their actual skills. Nor does it tell you anything about their ability to perform a job well, or how right they are for the role and your company. So instead, they rely on verifiable skill data to inform their recruiting decisions. This leads to a bigger, more robust, and more diverse pool of candidates.

Relying on gut feelings instead of data

The old way: Scouts used to base their recruiting decisions on gut feelings, which relied on optics and superficial numbers. These were things looked good on paper, but didn’t really have much to do with how well a player performed in a game. And for old-school technical recruiters, too many decisions are similarly based on gut feelings about a candidate.

The new way: Moneyball technical recruiters know that gut feelings, whether their own or the hiring team’s, can be very misleading. Instead, they rely on objective data about a candidate’s skills when they’re making recruiting decisions. They create internal skill benchmarks so that they can compare candidates to each other and to their engineering team’s technical bar.

Moneyball technical recruiting is skills-based recruiting. It relies on having objective, quantifiable data about candidate skills in order to work. Since you have cold hard facts to base your decisions on, you don’t waste time sourcing unqualified candidates. You’re able to recruit a more diverse pool of people. Your engineering team doesn’t waste time screening or interviewing candidates who don’t have the right skills. And you get a significantly better onsite-to-offer ratio! You can focus your efforts on people who would be a great fit for the role at every stage in the recruiting funnel.

In order to have a recruiting process that’s truly skills-based, you need access to a data-driven job marketplace. In this marketplace, the right talent can be matched with the right opportunity, at the right company. Candidate skill needs to be measured and quantified, of course. But the same methodology needs to be used on the company side to analyze open roles. In moneyball technical recruiting, companies and candidates can only be matched meaningfully if there’s enough data about both sides – and a way of using these data sets to put them together. Every technical recruiter can become a moneyball recruiter when they start using data and skills-based best practices to guide their recruiting decisions.