More Than Just Ink: Are Tattoos in the Workplace Becoming More Acceptable? 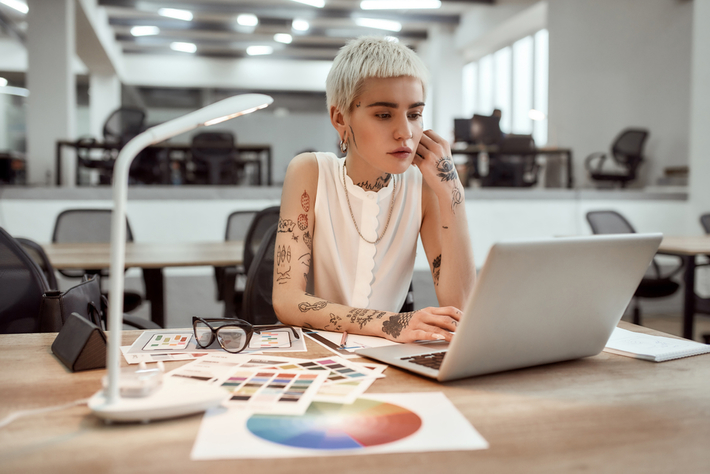 Tattoos are a type of body art that has been celebrated for thousands of years, yet a lot of people have had to hide them in the workplace due to negative associations and connotations.

While the stigma around tattoos in the workplace is definitely shifting, and Virgin Atlantic’s new policy is a prime example of that, there are still some conversations to be had when it comes to tattoos.

Today, we explore Britons’ attitudes towards tattoos in the workplace, what industries are more accommodating to tattoos, and how to comply to a workplace’s appearance code.

Changing the stigma around tattoos

The art of tattooing has been known to humanity since 12,000 BC and has served many purposes, from a means of communication to a reflection of culture and tradition.

When tattooing was introduced in Europe, it was first popular amongst mariners and the lower classes, and that has likely contributed to the stigma around it. For a long time, it was associated with jail, criminals, and misfits.

Nowadays, tattoos are seen as a means of self-expression and an appreciation of this ancient body art. According to a recent YouGov study, little over a quarter (26%) of Britons have tattoos, with the younger generation more likely to get one than the older. Tattoos are popular amongst the working population too, with 31% saying they have a tattoo.

They’ve become so commonly accepted that even world leaders from the past and present are known to have tattoos. King George V, who reigned the United Kingdom from 1910-1936, for example, had a red and blue dragon tattooed on his arm, which he acquired during a trip to Japan. Winston Churchill also supposedly had an anchor tattoo on his arm, while the Prime Minister of Canada, Justin Trudeau, boasts a Haida raven on his left arm.

As society embraces this type of body art more and more, the stigma around tattoos in the workplace is also shifting.

Are tattoos accepted in the workplace?

Britons have a generally positive attitude towards tattoos in the workplace. In fact, 86% said that they don’t see non-visible tattoos as unprofessional.

Nevertheless, things look slightly different when it comes to visible tattoos, especially on the face and neck, as 63% of the general public would consider them unprofessional. The older population, aged 55 and above, have a firmer stance on this, as 80% see face and neck tattoos as unprofessional.

With such attitudes, it’s no surprise that many industries still have certain appearance codes. According to Susan Harris, legal director at the GMB union, tattoos are not a protected characteristic, meaning legally you could be dismissed or be ruled out of a job due to having a tattoo.

Nevertheless, there are some prime examples that prove that the stigma is slowly shifting. Vladimir Franz, for example, who has a full-fledged face tattoo, ran for president of the Czech Republic. While he didn’t get elected, he serves as an example of the shifting attitudes and outlook towards tattoos.

Responsible tattoo artists also have a duty to inform clients about the complications of visible tattoos. Sheffield-based Krissie Langley always explains to her customers what impact hand and neck tattoos could have on their future jobs.

She said that she “puts off a good 95% of people” from getting a face or neck tattoo: “This is how I earn my living, but I also want to sleep at night. I do like to point out to people that this could affect their life.

“If you know you’re going into a job that is accepting it, then it’s good. But, at 18, how many of us know what we want to do forever?”

Krissie added that a lot of people have rang her back thanking her for putting them off from getting a visible tattoo, because it has allowed them to secure a job they otherwise wouldn’t have been able to.

What industries have a more relaxed attitude towards tattoos?

A lot of young people see visible tattoos as something trendy and impressive. Nevertheless, they don’t consider the impact it might have on their future careers.

“It’s all very well following your favourite rapper or favourite singer, but unless you're going to be a rapper, a singer, or a tattooist, you probably will hit these problems,” added Krissie.

Indeed, there are certain industries that have a more relaxed approach towards tattoos, such as music, art, and media. Most Britons consider it acceptable to have visible tattoos for workers in low-end customer-facing services, such as waiting staff, mass market retail, as well as firefighters and paramedics. Teachers in primary and secondary school, those involved in legal work and high-end customer service workers are subject to more scrutiny.

How to hide your tattoos at job interviews and the workplace

Before going to a job interview or starting a new job, it’s important to study the company policy. Based on the industry and company culture, it might have a more relaxed or a stricter approach to tattoos in the workplace.

As we mentioned, it’s not illegal to get fired due to wearing a visible tattoo; therefore, it’s important to learn how to adhere to certain appearance standards.

When attending an interview, consider wearing a full suit that will cover any tattoos on your arms and legs. This is the case if you have face or neck tattoos too. While you can’t hide them, you can opt for a smart and refined look that will highlight your professionalism and help the interviewer see beyond your body art. Match your suit with men's boots, a watch, and a tie for the ultimate interview look.

If you have tattoos on your hands or fingers, accessories such as rings and watches can help hide them.

While you’re at work, consider wearing long-sleeved shirts and pants, accessories, and even putting on a special tattoo concealer if required.

Covering your tattoos doesn’t mean that you are undermining your own identity. Tattoos are a unique form of self-expression, and while we’re in the process of shifting the stigma around them, it’s useful to learn how to comply to certain workplace appearance codes.