There has to be a line drawn and adhered to that separates the quick tweet and actual business correspondence.  How can, in 6 words, a person leave me with 200 words worth of complaints about this sentence?  That’s a ratio of 1:33 action : negative reaction.  Right in line with the disdain created by Dennis Rodman bantering with Karl Malone in the 1998 NBA Finals.

My proposed interview time was Thursday. Is this response telling me that the person can’t do Thursday, or asking me something cryptic about Thursdays.  Typically statements end with periods, questions with question marks.  I don’t see anything gained by dropping the C and replacing it with a K in the word KANT.  I understand the drop of the apostrophe, if you’re on a Droid like I am, it’s an entire option button away on the keypad, and who has the time in the day to hit option buttons?  I don’t understand replacing the C with a K, much like I have never understood why hip-hop artists often replace an S with a Z.  There is no efficiency gained by such a substitution.  And to be clear, I’m also a big hip-hop fan, so I ain’t hatin on this substitution just for the sake of hatin.

See what I did there?  Saved myself precious time by dropping the G on Hating and gained credibility with my audience by not sounding so stiff as to be lack knowledge on the subject.   Back to the Email: “can Friday?” What does that even mean?  Is it a question, a statement, a confirmation of the meeting? And why the sudden drop of the K in KAN?

People, let’s be professional.  I’m all about personality and style and efficiency, but we must present ourselves professionally in Email until a consistent rapport is created and protocol is understood by both parties.  My simple suggestion is never fall into text language over email, it’s a different tool with different rules. And when texting, practice brevity, but efficient brevity. At the very least, just make sense please.

This was originally posted at http://www.eleverpro.com/2012/03/omg-kant-believe-ths-just-hapend-l...

the joys of auto correct are legend.  Do you suppose that when the apostrophe was dropped it auto corrected philospohically?  Also s and z are a slip of the pickie apart. Let's keep trying to do business on a 31/2 inch screen.  Really sexy isn't it to be so Kool er' Adikited.

My response would have been, "Kall me?

Looks like the text exchanges I have with my teenage niece....And that's not good.

Haha.  I'm LOLing like a mad man over here.  Thanks for commenting, yall. 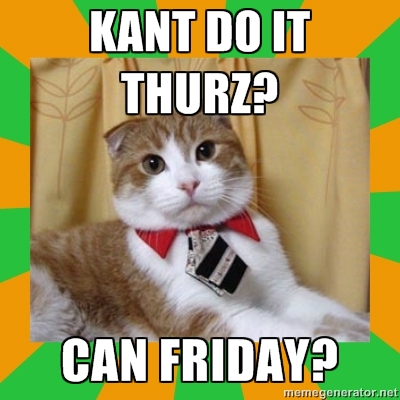 Because we were all thinking it