RECRUITING TALENT IN A MULTI-CULTURAL MARKETPLACE: DON’T GET LOST IN TRANSLATION 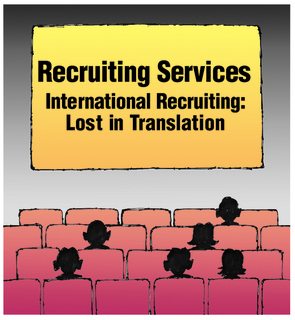 Whether achieving diversity goals for our clients or simply presenting the best available talent in an increasingly tight candidate marketplace, our recruiting practice at CFOs2GO is uniquely organized to execute talent acquisition strategies with recruiters from different cultural backgrounds who speak multiple languages.

As an immigrant myself, I am especially aware that I, like everyone else, am a product of the cultural and personal experiences that I have lived.  We are all drawn to what is familiar to us as that simplifies life and how we approach the cultural norms of behavior in our world.  In order to be successful acquiring talent in a diverse marketplace, we have to be especially observant of the norms of business speech and customs that we commonly use in the US and how those norms affect the evaluation of diverse candidates especially those from other countries and societies.

Recently we had two candidates interviewing for a controller positon with a prominent manufacturing company.   It was a difficult search due to the particular ERP system experience required and the company’s location.   There was not going to be a surplus of candidates if the client was going to meet its budget for compensation.  The client’s CFO came to our offices so that I could sit-in on the interviews.   Both of the candidates exhibited the skills and abilities the client was seeking in prior interviews with me personally.   Different issues arose with each candidate as I and my client, the CFO, met with and evaluated the two candidates.

John was a male originally from China.  When he arrived I asked him where in China he was from.  I was delighted to learn he was from Beijing where I had lived and worked for five years. We exchanged words in Mandarin and briefly discussed the dramatic changes in China over the last twenty years. This exchange broke the ice and John relaxed and spoke confidently. He easily expressed his extensive knowledge of accounting and the manufacturing industry as I spoke with him.  As the CFO began to enter the conversation and question him, the candidate’s answers seemed not as effective. As I observed their exchange I realized that because English was not the candidate’s first language and the CFO was speaking rapidly and using professional lingo, he was struggling to fully understand the nuances of the CFO’s questions.  He may have been a little nervous as well.   At any rate, his skills were literally being lost in translation.  I intervened to rephrase some of the questions to enable the candidate to more easily understand them and his answers improved. Had I not had the experience of living in China I would not have recognized the situation as easily nor been as adept at responding to it. Years of teaching English in China served me well in this instance.

Jane was an Ethiopian female who interviewed well in the session with the CFO and me.  She was more humble than John but expressed herself well in English (not her first language) and had the skills the client was seeking.  The CFO had no reservations about her work ethic and technical knowledge. There were, however, reservations about her personal impact.  “She seems meek and unassertive” the CFO said.  The CFO was concerned about workplace “fit”.  Her skills were seemingly being lost in the translation of her demeanor as measured by common US workplace behavior.  While I had observed her humble nature it did not occur to me that this would be a liability knowing as I did the workplace culture of the client. I was taken aback. I had viewed her humble demeanor as endearing. The client though was troubled by her lack of eye contact. Reflecting on this I realized that I was viewing her through the prism of the African culture.  In patriarchal African societies with which I am familiar, a woman making eye contact with an unfamiliar or older male is considered disrespectful.   There is also a norm of interaction in certain African societies that when something needs to be said it is said and when there is nothing to be added silence is golden.  Small talk is not common in those societies the way it is in the United States.  For someone unfamiliar with this norm it can be misinterpreted as a lack of interest or knowledge. The CFO did not have my knowledge of African society and was misreading her behavior as a result.  It was up to me to explain that aspect of her behavior and why she should not be regarded as a poor fit for the position. Jane was moved forward in the interviewing process and was ultimately hired.

Be Aware of Cultural Norms and Behavioral Differences

These experiences are a reminder of the role that cultural cognizance and languages play when recruiting in a low unemployment, diverse candidate marketplace.  It is paramount for companies to become more aware of cultural norms and behavioral differences, not only to avoid losing out on candidates with good technical skills and behavioral adaptability, but also incurring costs of delayed searches, miss-hires and/or more expensive hires.

Mwape is a member of CFOs2GO’s recruiting team. Her emphasis is on the International, and Food & Beverage practice groups, where she incorporates her 6 years of experience as a Concessions Manager and Hospitality Manager and her international background.

She is a team player demonstrating a high-level of accuracy and thoroughness; frequently acknowledged for her aptitude to work independently as well as collaboratively and take initiative, ownership, and accountability.

Her clients and candidates benefit from her personalized service, experience, and passion for her work. Her knowledge of the candidate marketplace, and best practices in recruiting allow her to offer direction and acumen along the way. Mwape speaks Chinese and has studied French, Spanish, Zulu and Afrikaans.

As recruiters are more relying on ATS Software platforms which ease the process of recruitment. But when it comes to the multi-cultural barriers it becomes hard to get things done. I have been using iSmartRecruit multilingual Web Based Recruiting Software that helps to overcome every multi-culture barrier and in acquiring a quality hire.

Hope it will help to overcome recruiters and staffing agencies and ease their multilingual hindrances!