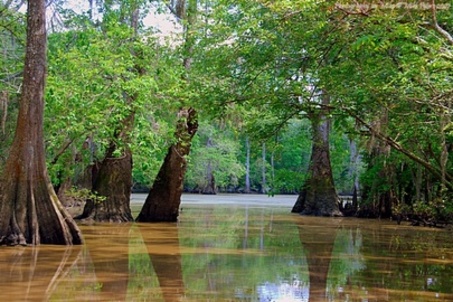 As he replayed the episode, my first thoughts were “what happened to my intelligent, educated husband that he would be so enthralled by these crazy people and this show?” (A few beers aided his enthusiasm.) The longer I watched the more intrigued I became of this Bayou lifestyle. I was raised on a 1500 acre grain farm in western Kentucky where hard work was expected and land was appreciated.  I grew up in a lucrative agri-business that produced a great lifestyle.  It was also the place where huntin’ & fishin’, shootin’ & boatin’ or anything outdoors was just normal recreation; so seeing this in the Bayou scene was familiar.  Although gators are not part of our landscape in Kentucky, I had the chance to get up close with gators in Georgia when my brother Jerry lived there (not Jerry Albright but from what I read about Jerry and hear him say on the Recruiting Animal Show these two Jerrys could be twins; although blasting coyotes from windows in the house would be a first for many).

The show was Swamp People and a new season begins this February.  Swamp People are intriguing for just the way they live their life – completely dependent upon the land and nature to provide food and revenue. They hunt and eat gator, squirrel, rabbit and anything else they think they can kill and cook (I’ll stick with my KY Bar-B-Q – arguably the best in the USA, the farmer’s markets and the local grocery for the my food supply).  The danger they encounter for 30 days each year to make a living is incredible.  This lifestyle has been passed on for hundreds of years and appears it will continue for the foreseeable future.

What I found so interesting after watching this show several times (yes Jon Ti-VO’d it) are the similarities between Swamp People and recruiters.  Headhunting has been passed on for generations just like gator hunting but I’m glad headhunting has evolved a bit and the technology has advanced.

Gator hunters know their niche.  They take out a certain number of tags each season and they must be filled.  Otherwise, the next season fewer are issued.  Each tag equals one gator.  How much the gator is worth depends upon the length and weight of the gator as well as the quality of skin (no flaws or defects like the tail bitten off).  Hopefully as recruiters we have honed our niche.  Our contracts are similar to tags.  Once the contract is signed, we need to fill it with a candidate who has a good track record, experience, cultural fit and is of good character.  (Otherwise, we might have our tails bitten off!)

The hunters in the Bayou know where the gators are and what bait works best. Whether it’s chicken with a secret sauce or occasionally fish, they all have their ways of luring the gators. Just like swampers, a good recruiter knows where to find candidates.   We build intrigue around the company and the job based on our knowledge, stories, information and job descriptions we use to engage candidates.  Each recruiter adds their own “sauce” to the mix to lure the candidates.

Boats, bait, hooks and guns are among the paraphernalia used by this hardy breed in Louisiana to tackle their job.  Computers, tracking software, land lines, smart phones, social media, resumes, networking and a good memory are some of the tools used by recruiters.  OH yes – we too are a hardy breed!

While there are days I feel like I’m wrestling gators when I deal with clients and/or candidates, and although I might like to shoot ém, (or as one of the swampers named Troy, says in his Cajun accent – “Choot ‘em!”) I think I’ll leave this to the real gator hunters.  Swamp People and recruiters have some similarities -- mostly characteristics that show our strength and our willingness to survive.  While these gator hunters only have a 30 day season, I’m glad recruiting is a year round gig and proves to be a good lifestyle and not quite so dangerous.

So get back to huntin’ and I’ll see you in the swamp.  Now, has anyone seen my gun….I mean my phone? I love this post Tina. Please write a Pawn Stars one next ; )

This is terrific - very well written Tina thanks!

Comment by Tina Guth on January 17, 2012 at 2:13pm
TIM - sorry I fat fingered my cell phone key pad. Seems as though I've hit several buttons today I shouldn't have. Sorry!

I was pulled in by an article on swamp people....I agree with Tim, Cajun Pawn Stars...   It is kinda sad that I know that.  Great article!  I didn't know where you were going to go with this article, but you ended up in a place that made me think "she's got a point"

Andrew I guess the bait worked. I'm glad you enjoyed the article.

Great post Tina.  I too was drawn into the show and look forward to next season.  Those guys are crazy - not unlike a few recruiters I know!

Thanks Jerry.  I'm glad you liked the post and I appreciate you being a good sport about being referenced here.  There's a little bit of crazy everywhere but that makes things interesting.

I really like the connection you made.  I will be going on a final interview for a recruiter position next week.  If you don't mind, I will be citing your posting.