The Breakfast Club for Job Seekers 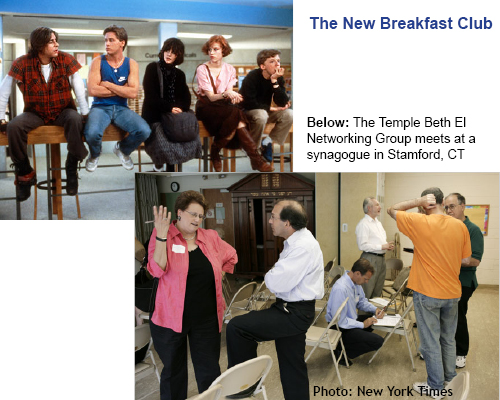 The New York Times recently covered a story on a “new species” of social clubs that have been popping up throughout the country. In light of high unemployment rates, job seekers everywhere have been forming clubs to cope, vent, and attempt to network their way back into the work force.
Job clubs, or what might be more appropriately deemed “jobless” clubs, are not an entirely new phenomenon, but their popularity has grown tremendously in 2009. Janice Juvrad, an unemployed woman in New Jersey who keeps a running list of regional job clubs, reported seeing staggering job-club growth between December and June of this year, “In December my document was 15 pages long, and in June it was 39 pages long.“ Her list focuses mostly on New Jersey, Connecticut and Westchester County, with only bare-bones information about New York City and Long Island. The complete list of job clubs in the region is presumably far larger.

Job clubs are run in a variety of ways, from breakfast meet-ups to venting sessions, to church-run networking groups. One group who began holding breakfast meetings at a local diner, was asked to take their club elsewhere- the food bill (based on their unemployed-budgets) wasn’t coming up high enough for the diner.

While some would consider job clubs an excuse for a pity party, others feel that expanding their network can’t hurt.


The Execu|Search Group’s take: If you are able to make more real-life connections and grow your network with a positive group of people, there is nothing wrong with joining a job club.