The Gap: What Really Happens Between The Offer and The Acceptance Do you remember those weeks before you got hired at your current job? Do you remember being excited by the prospect of finding a position that interested you and, despite knowing you were qualified for it, the nervousness of not knowing if you would be selected for an interview?

What about the few days after the interview, when you thought you nailed it, even that one weird question you never saw coming. You knew you had a real shot at it, and now it was a waiting game.

And when you got the offer. Because that's when fantasy becomes reality, not just in a Cinderella-goes-to-the-ball kind of way, but in that "Do I really want this job?" kind of way.

I bet you all know the percentage of people you extend offers to that end up saying no. Some of you probably know it to the fraction of a percentage. It's seared in your mind along with the names and faces of people you spent time finding on LinkedIn or in the pile of resumes that were submitted. You picked them out of a big pile, guided them through the interview process and presented them as an amazing candidate to your hiring manager. They were exactly what the company needed. You even did some extra work twisting arms to make that offer just a little sweeter.

And yet they said no.

I've always talked about how getting a job has a lot of parallels to dating, but usually I look at it from the job seeker's perspective. They do the dance – enthusiastic and coy at all once, afraid to seem too eager, betraying insecurities and doubts.

But the same can be said about the process from the other side. You do a similar little dance, focusing on a thin slice of candidates out of all the rest, but never really committing until everyone is on board. That moment when you extend the offer isn't asking them to go on a date – it's asking them to marry you.

And they turned you down. 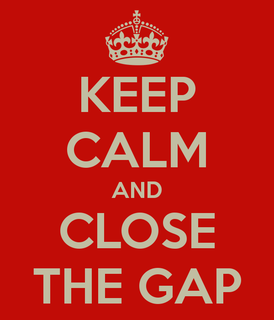 There's probably a reason they turned you down. A reason you probably already know about, but haven't dared to address. I'm talking about the gap.

Go look at your website. Not just the career site, but the entire corporate site. How much information is there that a serious prospect, one you just extended an offer to, can use to make a decision? Probably very little.

I'm not saying there's no information, because you and your web and marketing teams have spent a good deal of time and money creating content to say just the right thing about your company. Just look at all those press releases about awards you received in the last ten years. Look at the reviews about all your products. Look at that blog your team has written that you have been diligent in publishing once a month, whether you had something to say or not. Look at that brochure about your commitment to...something.

Honestly, if you can remember how nervous you were the day you took this job, does any of this information make you feel any better about saying yes? There are so many questions you have, and you simply can't ask them all. Is that blog answering any of them? Or that brochure? What about that amazing prospect you extended the offer to? Does any of this information make them feel compelled to take the job with giddy enthusiasm?

Sadly, the answer is probably no.

For all the talk about content marketing in talent acquisition, filling in this gap is something that rarely gets mentioned. Content is seen as something to amass and accrue like gold coins in a video game, with each coin the same as the next.

But in the content world, that's never true. Let's say you look at the analytics of your blog. Is there one page that makes more people apply than any other? Then I guess that all content isn't the same.

Unless you have a very clear objective on what you want the content to do, is it any wonder there's a gap?

If you're interested in seeing what content can really do for you, start by filling that gap. Start to think about what you wanted to know when you were made the offer. Ask all your HR managers what questions they get asked by prospects and collect smart answers to them.

Whether you publish all this new content on your blog, your site, or just build it as a "We'd like to extend you an offer" kit that you only give out with an offer (or maybe publish everywhere), watch to see it slowly lower that percentage of people who reject your offer. Watch it keep more of your candidates from walking away, lowering your overall cost per hire.

And when you see that change, you'll see the power of content and how it can impact all aspects of hiring the best people.

The gap between what you tell a prospect and what a prospect wants to learn.

This is one of those points within the recruitment process that recruiters (young & old) often overlook.

Have a Great Weekend and Keep Blogging,

Close. I'm saying that because a company usually keeps all its useful/valuable/actionable information under wraps, people are hard pressed to commit without that info. Whether its on the website or in a "we'd like to extend an offer to you" packet, there's a gap between what prospects want to know and what we're willing to tell them.