The Most Demanding (and Rewarding) Job of the Season 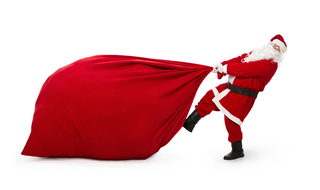 Being a mall Santa might seem like a relatively easy job: Sit all day, put kids on your lap, listen to their Christmas list and pose for a photo. But if you ask any Santa Claus who’s worked one season at the mall, they'll tell you it's the most demanding job of the season. A day in the life of a mall Santa can be grueling as an endless parade of children line up for a moment with the season's biggest celebrity. It’s not uncommon to be visited by over 15,000 children between Black Friday and Christmas Eve (more if you’re located in a major city).

What job would you guess can make upwards of $100/hour during the h...

I am the daughter of a professional Santa Claus. People always commented on my Dad’s resemblance to Jolly Old St. Nick and after retiring from an Engineering career, he decided to grow out his beard and apply for a job. When employers saw our last name, Nicholas, and his fluffy white beard they'd hire him on the spot. But before landing a gig, you need a Santa suit and a good one costs at least $600 with prices upwards of $3,000. Also, you’ll need gold wire glasses, an endless supply of white gloves, beard tint to keep it bright white, countless pots of rouge for rosy cheeks and heavy duty black boots ($250+). And if you're whisker-free, in addition to often earning 40% less than your bearded co-workers, you can expect to spend at least $500 on a realistic version with prices approaching $2,000 for custom wigs/beards.

Staffing for seasonal Santa's begins in the summertime when men begin growing their beards and rounding out their belly. The goal for employers is to keep the same Santa at the same location year after year. Salary is predicated on the total years with the program to incentivize the seasonalemployees return. Years ago, my father, now 83-years-old, stepped back from multiple Santa gigs at the firehouse, malls, parties and appearances. Now he works only one job a year at one of the most exclusive resorts in the Northeast. Instead of a monetary wage, he is paid with an all-inclusive week at the iconic hotel (cost of over $4,000). Not bad for 4 hours of work.

National companies who staff Santa Claus and his team for mall photo's average $15/hour to $20/hour and require 7-10 hours a day. Top cities pay the most with average wages around $30/hour to $40/hour. In fact, about 80% of top Santa's do not work in the same area they live and often travel out-of-state for the 6-week season to earn more. The average Santa can make $8,000 to $15,000 during the holiday season, but particularly talented ones can pull in as much as $70,000. Private events with a visit from Kris Kringle will set you back a minimum $100/hour with average prices of $250 to $400/hour. And that price increases as Christmas Day approaches.

If you ask any of them why they do this job, you won’t find a single person who is in it for the money. The salary certainly helps, especially after the considerable investment in costume and attire. But the magic of being the most famous person on earth, and seeing the joy in children's eyes, makes it the most rewarding.