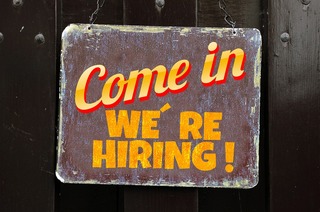 As a caveat, I've worked in retained search and now in-house and I see the value in understanding, identifying and recruiting passive candidates. This post is by no means a diatribe against including proactive recruitment efforts into your overall sourcing strategy.

This post is aimed more at the attitude and general addiction the recruiting world has for passive candidates, specifically when passive candidates are sought for a lateral move offering no immediate career progression.

Recruitment suppliers and companies have both developed a bit of a penchant for passive candidates and litter conversations, articles and recruitment marketing with the term indiscriminately and without much thought.

The elevation of the passive candidate would not be a negative thing, if it weren't for the implied devaluation of active candidates and the focus this places on passive candidate approaches above producing effective job adverts. I'll come back to this at the end of this post.

So who is fuelling the demand for passive candidates and where did the higher status of being passive come from? I'd argue that both recruiters and hiring managers are to blame:

We've all done it and chances are if you work for a recruitment agency or retained search firm, you can't speak to a client without mentioning those wonderful passive candidates that you are able to unearth.

This is largely a part of every recruiter's repertoire. After all, if you're not targeting passive candidates you're likely not speaking to the best candidates, right?

Recruiters however are only acting on the desires of the businesses and hiring managers which they serve. If there wasn't such a demand for passive candidates, recruiters might not use the term so flippantly.

One thing hiring managers (for the most part) find absolutely no pleasure in doing, usually avoiding at all costs if possible is recruiting. If hiring managers liked recruiting they would be more actively involved in investing more time and improving their recruiting skills and the sea of recruitment agencies would dry up very rapidly indeed.

As hiring managers don't care much for recruiting, they don't waste much time in understanding how to recruit.

One thing hiring managers tend to want above all else in recruiting is to do it quickly and avoid having to do it often. When they are tasked with employing someone, they want as little risk as possible in said new employee not working out so that they don't have to repeat the whole painful process.

Unfortunately they incorrectly assume that the new hire with minimal risk and maximum chance of success is the passive candidate, happily employed elsewhere doing exactly the same job.

This is hardly ever the case. It causes salaries in industries to spiral ever upwards as companies have to compensate for lateral career moves with cold hard cash and it denies growth and development opportunities to candidates who aspire to the role as their next career progression.

So where does this leave us?

We have hiring managers trying to take what they perceive (incorrectly) as the least painful approach to recruiting, crying out for passive candidates with an abundance of recruitment agencies and retained search firms all scrambling over each other to meet this request.

Sadly the people who really suffer in the process are the candidates labelled as active job seekers. At any other time in their career they would satisfy the passive candidate addiction simply through being employed but in this instance, due to circumstance, they are often overlooked or worse, deemed to be less qualified.

With the value placed on passive candidates, a great majority of agencies and indeed in-house recruitment teams focus their efforts on passive candidate attraction above all else, sacrificing time and effort which could (and more rightly should) be spent on producing great job adverts and targeted, well-crafted approaches. Frequently recruiters are instead using this time to send out high-volumes of template LinkedIn InMails, emails and messages through other social media avenues.

One upside to this is with more and more candidates being actively approached through social media and job adverts becoming progressively more unappealing, a well-written job advert that has been considered and placed in the right channels is so much more refreshing and by means of differentiation, so much more effective.

As recruiters, we would do well to spend less time pontificating on the next breakthrough in passive candidate attraction and focus more on attracting the right candidates (be they passive or active) through writing great job adverts. A skill and also key part of the recruiting process which is often sadly neglected.