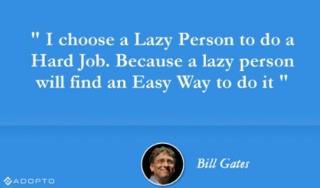 Attracting and retaining the most talented people is crucial for success of any company, especially for IT companies. Hiring technical roles is one of the most difficult task.

That’s why we have gathered 10 inspiring quotes from some of the most successful leaders working for technological giants. You can find some great advice here, so feel free to use them as a help for you to become even better in HR & recruitment.

"Two of the biggest challenges in technical hiring are identifying people who are smart but ..." - Joel Spolsky pic.twitter.com/AtlBVCVNdF

"It doesn’t make sense to hire smart people and tell them what to do" - Steve Jobs pic.twitter.com/ViSMQRdU8G

"We are never in lack of money. We lack people with dreams, who can die for those dreams." - Jack Ma pic.twitter.com/2oXNwvmvCu

"We just want to have great people working for us." - Sergey Brin pic.twitter.com/vgtw7ChOGX

"Most good programmers do programming not because they expect to get paid or get ...." - Linus Torvalds pic.twitter.com/vBXo2l3dFM

"Treat your employees right, so they won't use your Internet to search for a new job" - Mark Zuckerberg pic.twitter.com/ikxh8BmgAm

"Responsible people thrive on freedom and are worthy of freedom. Our model is ..." - Reed Hastings pic.twitter.com/SjHdhXFoEB

"The secret to successful hiring is this: look for the people who want to change the world." - Marc Benioff pic.twitter.com/X4bVIPkz7S