Up Against the Clock – 6 Productivity Hacks for Speedy Recruitment

When the countdown is on, and there’s a deadline looming, it often seems like the whole world is making a concerted effort to slow you down. And short of moving your bed into the office, there’s very little you can do to fill those reqs in time. Thankfully, just a few small changes to how you handle your work means that you don’t need to worry about bringing pillows to work.

Sacrilege! Surely we’re not suggesting that you cut down on your absolutely necessary daily intake of caffeine? 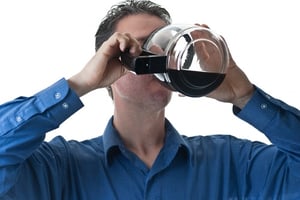 Actually, yes we are. While many of us live for that first morning cup, too much of a good thing (and coffee is a very good thing) can have a negative impact on your productivity.

Taking a breather from work (more on that later) is wonderful for keeping your mind focused, but if that breather involves copious cups of coffee, then you could find yourself becoming reliant on its effects. This can then affect your quality of sleep which in turn leads to the need for more coffee to stay alert throughout the day.

Too much caffeine can also affect your anxiety levels especially if you’re already under a lot of pressure. So drinking bottomless cups of java when up against the clock might not be the best way to get the job done after all.

So right about now you’re probably thinking that there’s something seriously wrong at vsource HQ. First, we tell you to cut down on your coffee and now this! Bear with us though; we do have a good reason for this one.

You see, everybody hates Mondays, right? You’ve just had a great weekend, and then along comes the first day of the week bringing with it a ton of work that you really should have finished off on Friday. And if you’ve had a wonderfully lazy Sunday then getting back into the right frame of mind for work can take quite some time.

But set aside an hour or two on Sunday afternoon or evening to plan the week ahead, and without even realising it, you’ve just completely changed your mindset. In fact, we’ll even go so far as to say that if you get into the habit of doing this, you’ll find yourself eager to get into the office on Monday to get started on your tasks. You know what they say; a good start is half the battle (and Monday mornings really can be a battle).

3. Use time slots for checking email

According to a survey carried out by Adobe, employees spend as much as 30 hours a week checking their email. That’s six hours a day which is quite astounding when you think about it.

So to avoid going down that particular productivity-draining rabbit hole, it’s a good idea to have specific time slots during the day for checking your emails. Spend 20 minutes three times a day checking and replying to your emails and those six hours are whittled down to just one.

And if you’re having trouble ignoring your inbox then try pausing it. There are several apps and extensions that you can use to do this. Just make sure you choose one that can notify people who are emailing you that your emails are ‘on pause’ while you’re getting some work done.

There was a time not so long ago that multitasking was a buzzword that impressed hiring managers. But that was before we realised that this apparent superpower can actually reduce productivity by as much as 40%.

So while you may feel like you’re getting a lot done when screening resumes and calling candidates at the same time, you’re probably just spending more time doing two jobs poorly. Better to set yourself a task to complete within an allotted time and stick to it. By focusing all of your energies on one task at a time, you’ll find that not only will you do it quicker, but you’ll also do it right.

5. Give your mind a break with less important tasks

Now this one may seem a little counterproductive (a bit like the coffee limit we mentioned earlier) but taking time away from important tasks is an excellent way to give your mind a break.

The human mind works in mysterious ways and sometimes doing busy work is a better way to relax than putting your feet up on the desk and daydreaming. Of course, it’s also better for your career prospects to keep those shoes on the floor where they belong.

Studies have also shown that busy work can boost your mood and instil feelings of accomplishment. And this could be just the tonic when working on a particularly tough recruitment drive. Twenty minutes of busy work + feelings of satisfaction = a refreshed mind ready to take on the world.

So when making that weekly plan on a Sunday evening, make sure that you include a few unimportant tasks or easy wins for Monday’s schedule.

6. Curb your enthusiasm for social media

There’s no stopping the runaway train that is social media recruitment with 91% of employers now using a social media platform to recruit. Not only that but according to the 2018 Recruiter Nation Study47% of recruiters think that social media is important for growing an employer brand.

So it’s kind of understandable that recruiters spend a great deal of time on LinkedIn, Facebook, and even Instagram (yes, recruiters go there too now!) The only problem with this is that social media is yet another one of those rabbit holes we mentioned earlier. You know how it goes; hop on Facebook to check out some potential candidates, and three hours and several videos and blog posts later you’re no closer to completing your task.

As impossible as it may seem, it’s best to take a similar approach to social media as we recommend with your email inbox. Only check it at specific times and log out, close the tab, or snooze notifications for the rest of the day. And when you are on social, try to remain focused on the task at hand and ignore everything else. Yes, and that goes for those puppy videos your mother keeps tagging you in too.

Another great productivity hack you might want to try is sharing your workload with a highly trained expert in the field. Yes, this is the part where we once again brag about our uber-efficient sourcing consultants. Seriously, they live to source and with one on your team, your productivity levels will most likely go through the roof! Provided you don’t take the opportunity to put your feet up on the desk of course. If you’d like to know how vsource can help then you know what to do; book a free no-obligation demo today and boost your productivity for 2019.