Online labor demand in the United States began its descent toward the end of the year. Employers posted 2.4% fewer job openings in November than in October. Employers struggled to maintain a decent level of labor demand this year. Cracks began to show in June when the market lost 3.0% of its volume. From there it was a slow slide towards election day. During the four weeks before the election posting volume increased indicating more optimism on the employer side (see weekly chart below). Consumer confidence is on the rise as reported by The Conference Board and Bloomberg which may increase demand for products and services.

The next challenge for jobs is straight ahead. The resolution of the fiscal cliff with a solid compromise by the end of this year would send a positive message which would support more optimism among consumers and employers. A compromise would help lift the job market next year. 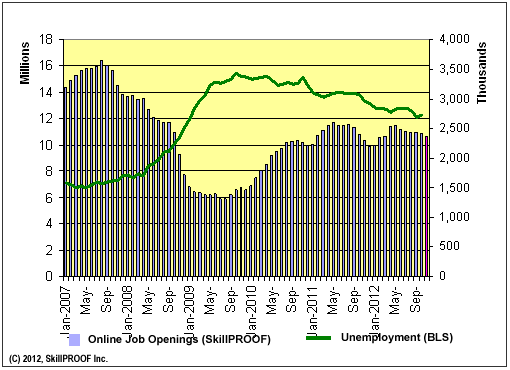 The slowing labor market reversed during the weeks before the election. In October employers kept increasing their job postings. With the election over we are now likely to head straight down until early January. Depending on a financial compromise in Washington we will see either rising labor demand in the first quarter or an extension of the past four weeks. Update: Private sector employment increased by 118,000 jobs from October to November, according to the November ADP National Employment Report®. www.adpemploymentreport.com.

BLS: Total nonfarm payroll employment rose by 146,000 in November, and the unemployment
rate edged down to 7.7 percent. www.bls.gov