Webcam Job Interviews Are On The Rise 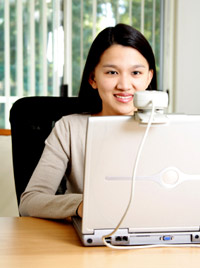 Technology is advancing at an extraordinary rate and we must embrace it, not resist it. Among those technological advances include the popularity of webcams and services such as Skype. This advancement is contributing to the rapidly changing landscape of the recruiting process by making it possible for recruiters to conduct interviews with candidates all over the world, without anyone even leaving their house. As with most technologies, sometimes it takes awhile for it to catch on.


The overall results in a recent 6FigureJobs survey conducted in June 2010 shows that 89% have or would participate in a interview via webcam, leaving only 11% that continue to reject the concept. Of those candidates polled, 39% say they have participated in an interview via webcam at least once or twice and 7% say they have done webcam interviews many times. Like it or not, interviews are happening through new technologies.

This same survey was conducted by 6FigureJobs in 2009 and at that time only 20% of the surveyed candidates had ever interviewed using this method, while 21% said they would never participate in a webcam interview. Now, just a year later, the numbers of participants that have used this method has doubled, while the number of naysayers has been reduced by half.

The appeal is easy to support, its more cost effective and time efficient for both the recruiter and the candidate. The validity of this method has proved its worth by saving companies thousands of dollars in hotel and travel costs; while at the same time implementing time-saving costs for the job-seekers. At this rate, 6FigureJobs estimates that by 2012, webcam interviews will be the norm, not the exception.

Comment by Bill Ward on August 4, 2010 at 5:03pm
Why would you not embrace something that saves you and your clients a ton of time and money? We've used Skype for interview purposes about six months now and it has been a great tool. Heck, forget phone screens, now you can cover a lot more ground on the initial call. Increased productivity and efficiency across the board.