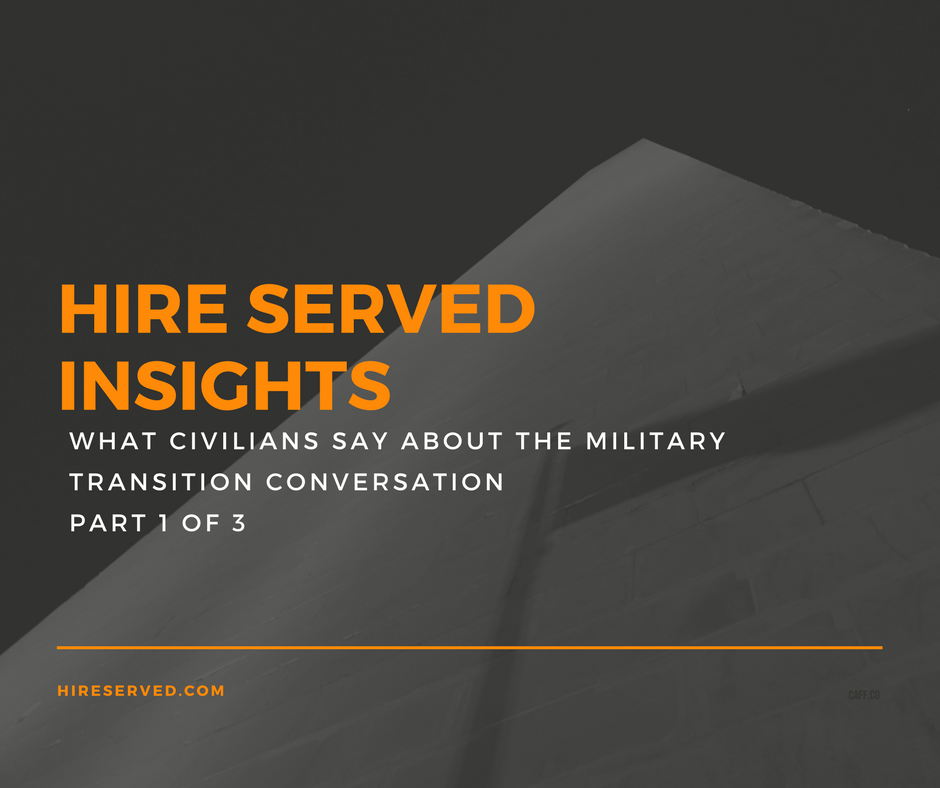 I FEEL SO BAD FOR THEM, THEY’VE DONE SO MUCH AND THEN IT’S SO HARD TO COME HOME AND BE NORMAL AGAIN.

WHY ARE WE EVEN HAVING THIS CONVERSATION? WHY DO WE HAVE TO DIFFERENTIATE BETWEEN VETERANS AND OTHER PEOPLE? IT’S LIKE WE’VE CREATED A VICTIM CLASS.

HOW IS A VETERAN’S TRANSITION ANY DIFFERENT FROM WHEN I SWITCHED CAREERS? I HAD TO START AGAIN AT THE BOTTOM AND WORK MY WAY UP TOO! WHY SHOULD IT BE ANY DIFFERENT FOR A VETERAN?

These are just a few of the things I hear when I tell people that my company, Hire Served, exists to change the lives of servicemembers and their families by connecting them with meaningful jobs at small/medium-sized businesses who would love to hire them but don’t know how to connect with them. Since I respond to these so frequently, it occurs to me many others may be thinking it but not saying it. For brevity’s sake, I’ll cover these in three separate posts. Let’s dive into the first now.

I feel so bad for them - they’ve done so much and then it’s so hard to come home and be normal again.

I’m going to break this one into two parts:

I feel so bad for them - Veterans appreciate your patriotism and gratitude for their service. What they don’t want is your pity. We have a volunteer fighting force and every veteran currently transitioning served of his/her own free will. They took an oath, much like the one we recently heard our new president take, and swore to protect and defend the constitution of the United States against all enemies, both foreign and domestic. That oath was taken without any reservation. Don’t feel bad for a single person who has served this nation and don’t pity them for the sacrifices they have made.

On the other hand, don’t be the person who says, “You knew what you were getting into, suck it up.” There is no way that any veteran or spouse knew what we were getting into 100%. We’ve all lost things we didn’t expect to lose, but we did it for this great nation, for our babies who will come behind us, and for you and your babies. This was our choice. Thank us - both vet and spouse, but never ever ever pity us.

- This statement assumes all veterans have seen intense combat, which is in itself a fallacy. What all veterans HAVE seen, is government bureaucracy, acronyms out the wazoo, and more policies and procedures governing more things than you could fathom. These are what make transition universally difficult for vets - the things that are so incredibly different between the corporate and government sectors. We’ll hit that more fully in parts two and three. But first, let’s talk about those who HAVE seen combat and what the heck “normal” is all about. In his book, Tribe, Sebastian Junger says that modern society differs from previous societies because it expects only its warriors to transition between combat and the civilian world, the rest of us don’t feel the impact of war on our daily lives. Only warriors transition from "normal" to "war" modes. But, funny thing, combat vets don’t necessarily consider civilian life “normal” - for them, combat zones quickly become the norm and many are more comfortable there than they are at home (much to the chagrin of their wives who struggle to fight for their attention against a mistress much more enticing than home life).

Inherent in this statement is the assumption that veterans are all damaged somehow from war. They are not. It is impossible to see the horrors of war and not be changed by it, but the assumption that this change is always for the negative is wrong. Most veterans I know are better people, better citizens, and better friends because of their time in service. They are also better employees - capable of stepping into leadership roles their peers couldn't possibly manage and able to handle intense stress without flinching. Many times I've been in situations I felt were stressful and had a veteran look over and give me perspective, "Hey - noone's shooting at us, we're good." I've sat at the feet of our nation's finest leaders and learned how to help individuals feel valued and build a connected team that is capable of accomplishing more together than individually. I've learned how to help organizations communicate more clearly, respond better to their customer's needs, and adapt to changing marketplaces. Those lessons were learned from veterans.

Yes, adjusting to civilian life can be a challenge once you’ve lived in a war zone for years, maybe even the bulk of your adult life. However, that’s not a reason to pity our vets. It’s a reason we should be motivated to better understand those adjustment challenges and figure out ways we can help them effectively transition into the workforce so we can all continue to benefit from their service. Instead of talking about how hard it must be for them to come home, why don’t we find ways we can help bear that burden instead of leaving it all on the shoulders of our servicemembers? I mean, haven’t they done enough to deserve our going out of our way just a bit?

*This post is part of a three part series. Read it and the other two parts on the Hire Served blog.

The Author:  Jean South is a Marine spouse, daughter of two Army veterans, and former FBI Special Agent. During her career she has had the honor of working alongside our nation’s warriors. As the President and CEO of the Hire Served, Jean gives companies a competitive advantage to compete for veteran talent by helping bridge the culture gap between military candidates and HR.